THE FLATS – True freshman Jahmyr Gibbs amassed 219 all-purpose yards and scored two touchdowns in his collegiate debut, but it wasn’t enough to overcome UCF’s high-powered offense, as Georgia Tech dropped a 49-21 decision to the 14th-ranked Knights on Saturday afternoon in the Yellow Jackets’ 2020 home opener at Bobby Dodd Stadium.

Gibbs starred for the Yellow Jackets (1-1, 1-0 ACC), running for one touchdown, catching a pass for another and setting up Tech’s first score with a long return on the opening kickoff. True freshman quarterback Jeff Sims completed 18 of 36 passes for 244 yards and a TD, but threw a pair of interceptions, and the Jackets lost three fumbles for a total of five turnovers, their most in a game since they had five at Virginia on Oct. 26, 2013.

Tech racked up 471 yards of offense, 244 on the ground and 227 through the air. Sims was Tech’s leading rusher with 82 yards on 16 carries, while Gibbs picked up 66 yards on 15 attempts on the ground, and caught four passes for 60 yards.

Tech got on the board quickly on its first possession after freshman Gibbs returned the opening kickoff 75 yards to the UCF 21-yard line. The Jackets covered the distance in three plays, scoring on Sims’ 1-yard plunge. UCF (1-0, 0-0 AAC) answered immediately by traveling 75 yards on eight plays, getting the final six yards on a pass from Dillon Gabriel to Tre Nixon.

The Jackets drove deep into Knights’ territory in its next two drives, but UCF recovered a fumble and blocked a field goal attempt, leading to 21 second-quarter points. Gabriel completed 12 of 16 passes for 197 yards during the period, while the Knights converted 5-of-5 third downs in mounting touchdown drives of 80 and 90 yards. Gabriel’s 8-yard TD toss to Marlon Williams capped the first drive, and Greg McCrae finished off the second march with a 21-yard TD run. After an exchange of turnovers, UCF scored again, moving 35 yards on four plays with Gabriel hitting Nixon for the second time on a 25-yard strike and a 28-7 lead with 2:17 left in the half.

Tech closed the gap to 28-14 just before the half when Sims led the Jackets 75 yards in just 1:03, with Gibbs taking a 9-yard pass for the touchdown.

After a scoreless third quarter, Tech drove 56 yards for a touchdown, Gibbs covering the last 33 on the ground to make the score 28-21. The Knights, however, again answered quickly, moving 75 yards on six plays in just 1:32 for a 35-21 lead. Gabriel hit Williams for 40 yards for the big play in the drive, and Otis Anderson burrowed in from the 1 for the touchdown.

The duo hooked up again for a 7-yard score to cap an 8-play, 63-yard march with 5:30 left in the game, and the Knights’ converted an interception into a 20-yard TD drive to account for UCF’s final points.

Gabriel threw for 417 yards and four touchdowns, Williams and Jaylon Robinson had 154 and 105 receiving yards, respectively, and Anderson ran for 88 yards to lead the way for UCF.

Williams finished the game with 10 receptions for the Knights, whose quick-snap, no-huddle offense generated 660 yards, 243 of them on the ground.

The Yellow Jackets are back on the road next Saturday, Sept. 26, when they travel to Syracuse to face the Orange at the Carrier Dome. Kickoff is set for 12 p.m. and the game will be televised regionally on the ACC’s Regional Sports Network (Fox Sports South in Georgia). 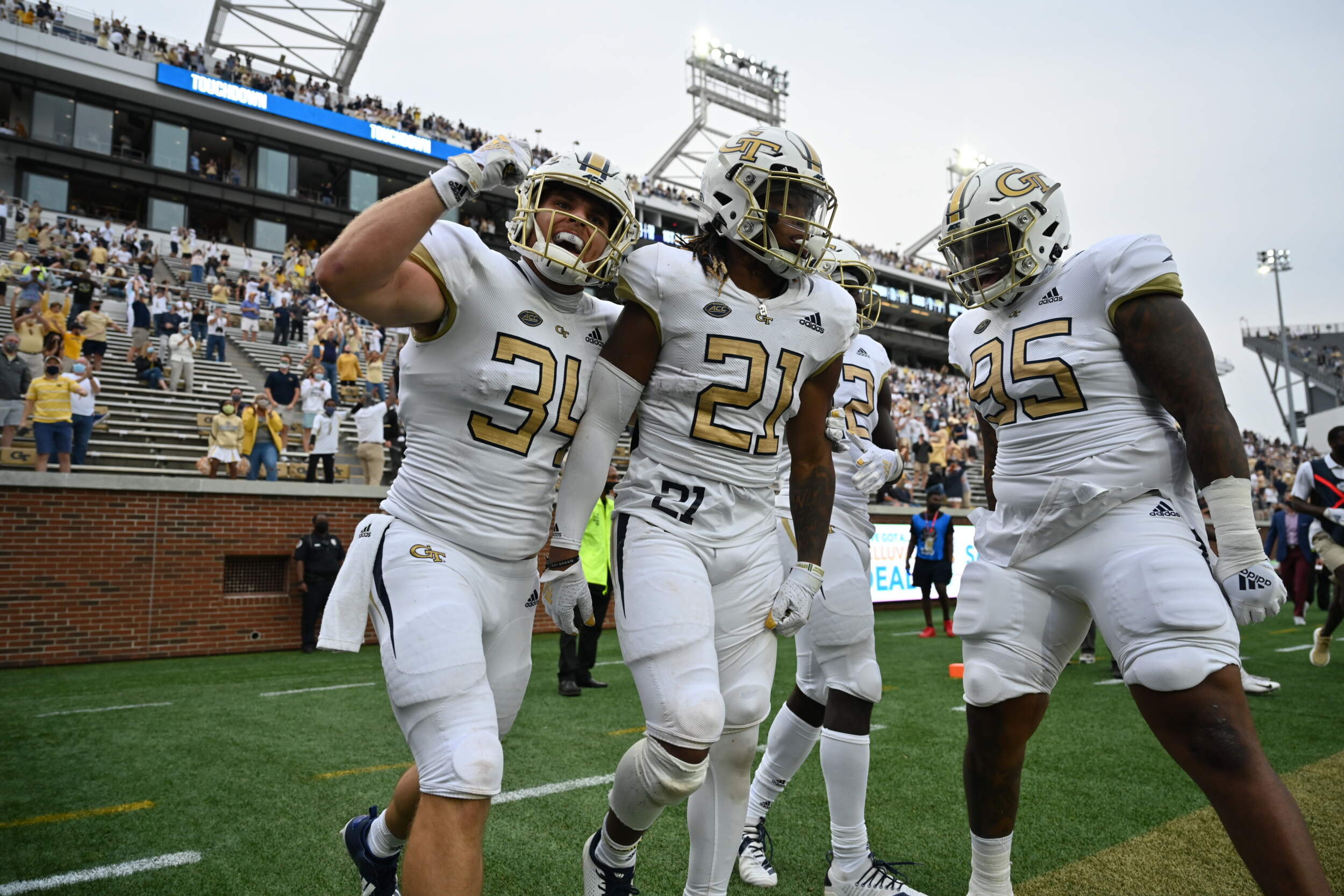 Freshman Jahmyr Gibbs celebrates one of his two touchdowns in Saturday’s game. 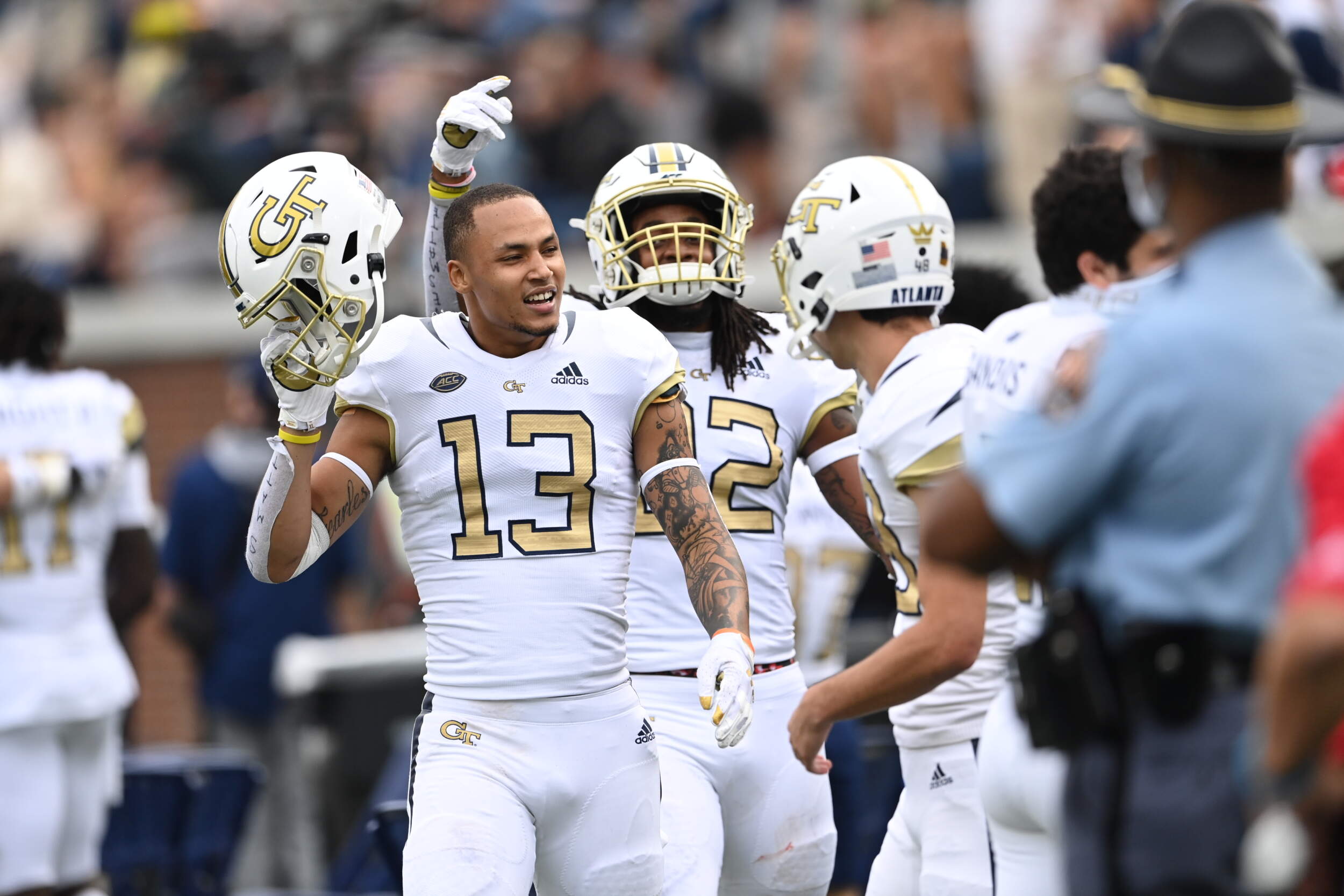 Avery Showell’s second-quarter fumble recovery was the first of his career.

Jahmyr Gibbs set the tone RIGHT AWAY and @GeorgiaTechFB punched in a TD three plays later! 🐝

Georgia Tech alum Thomas Carter took a photo at a 1918 football game during a flu pandemic.

More than 100 years later, his great-grandson Andy McNeil is back in those same seats, taking the same photo.
Masks helped reduce the spread of the virus then, and they're helping now! pic.twitter.com/FBLkESftQL