Inside The Chart: Wait No More

Antonneous Clayton has no intention of letting a quarantine derail his focus.

Not after waiting a year-and-a-half to return to the field. Not with one year left in his college career.

“If you want to get ahead, now is the best time to do so. It’s so easy to not do anything right now. It’s so easy to become complacent, sit around the house all day, eat chips and watch Netflix,” the senior said from Nashville, Tenn., where he moved in March for the rest of the spring semester to be closer to his girlfriend and one-year-old son.

Netflix and chill? Good luck getting Clayton to do that. The 6-2, 265-pound defensive end has instead filled his days with schoolwork, training, film study, family time, and little else. Ten weeks away from the rigid schedule of a student-athlete – and the temptations that come with it – hasn’t caused Clayton to lose his edge.

“The average human being needs someone to motivate them – unlike me. I don’t need anybody to motivate me. I’ve been motivating myself for years because of all the adversity I’ve been through,” he added.

The anticipation for Clayton’s debut has only intensified since the Vienna, Ga., native transferred to Tech in the summer of 2019 following three seasons (one as a redshirt) at the University of Florida. A former Rivals five-star prospect, he becomes the highest-ranked player to suit up for the Yellow Jackets since Hall of Famer Calvin Johnson. He’s expected to invigorate a Georgia Tech pass rush that hasn’t finished higher than 108th nationally in sacks per game in the last six seasons.

That may seem like an oversized burden, especially for someone with only 10 career tackles, but Clayton has dealt with high expectations since coming out of Dooly County High School in 2016. Around Vienna (pop. 4,000), two hours south of Atlanta, he’s still known as “Big Eye,” a nickname given to him by his grandmother for the big eyes he had as a baby. On the football field, Clayton opened eyes: he finished his senior year ranked the No. 2 weakside defensive end in the country and No. 27 player overall according to the 247Sports composite rankings. He signed with Florida, and then-defensive coordinator Geoff Collins, over offers from Auburn and other SEC powerhouses. Clayton says he still keeps the first Twitter message Collins sent him.

Their time at Florida only lasted a year together; Collins left for the head job at Temple in 2017. Clayton appeared in five games as a freshman before suffering a season-ending injury, then struggled to gain traction on the Gators’ depth chart. He redshirted as a junior, playing in just three games and recording zero tackles.

When he sought a fresh start closer to home, Clayton thought back to the connection he first made with Collins.

“When I decided to transfer, coaches were calling immediately. It was like, ‘Oh man, I don’t know where to go.’ I was like, ‘Who’s one guy that I know that I can put my trust and my faith in, and all I’ve got to do is work hard and everything else will take care of itself?’ And the first person who came to mind was Coach Collins,” he said.

Clayton enrolled at Georgia Tech in the summer of 2019. In addition to his relationship with Collins, he also developed a close bond with his new position coach, former Tech Hall of Famer and 12-year NFL veteran Marco Coleman. Clayton calls him more of a father-figure than a coach.

“To have a coach that actually played in the league and [was drafted] in the first round, I’m taking it all in.  There’s not one thing I’m going to question,” he said.

“He’s helped me find some kinks in my game that I didn’t know I had.” 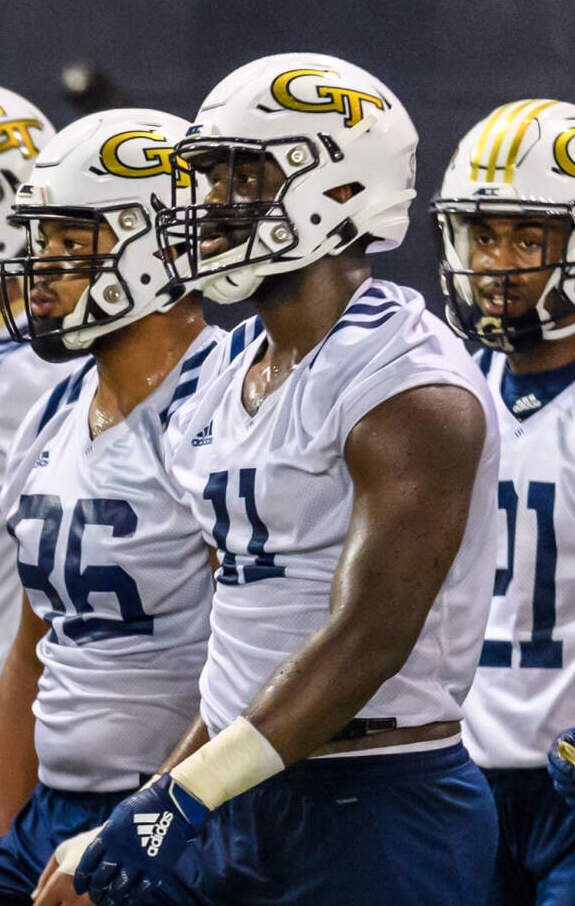 Clayton had hoped to debut those improvements last fall, but his perseverance was tested yet again during the preseason. A day before Georgia Tech’s season opener against defending national champion Clemson, Clayton learned that his appeal for an immediate eligibility waiver had been denied. The upcoming year would also count toward his eligibility. Reality began to sink in: 2020 would be his only season in a Georgia Tech uniform.

The ruling stunned many around the program, but Clayton didn’t sulk – inspired, he said, by setting an example for his young son.

“I may be sitting out this year, but I already know what’s in store for me, so that’s the motivation for me to keep going. Would I rather get in a slump right now, be depressed, kick myself around because I can’t play, or I go out there and get my team better every single week?” he said of his mindset.

“The way he handled it with class, the way he worked every single day, he was an unbelievable teammate.  He supported the other guys at the position, came to work every single day and helped make [offensive linemen] Zach Quinney and Jack DeFoor better every single day.  I’m really proud of him as a man,” said Collins.

Clayton says he also felt something unexpected while sitting out last year.

“The love [for the game] grew even more,” he said. “When I was at Florida, yeah, I loved the game, but something was missing. I feel like I finally found that at Georgia Tech.”

He’ll finally get a chance to showcase that love in a live game this fall. He understands the convergence of pressure, both internal and external, that awaits him. The pressure of making up for lost time after essentially missing two-straight seasons. The pressure of putting up monster stats and securing a pro future with his one season left in college football. The pressure of living up to the expectations of a former five-star recruit. The pressure of giving sack-starved Georgia Tech fans the kind of ferocious pass rush they’ve been waiting for.

Clayton says his perseverance will trump the pressure.

“Whatever it is, I embrace. I know the expectations of me. I know what I’m supposed to do. I know what I can do. People thought I was just a five-star right out of the gate. What people don’t understand is I started out as a three-star. I didn’t get my fifth star until I played in the Under Armor [All-American] Game and showed what I can do. I’ve always been the type of person to prove myself,” he said.

Amid the quarantine, Clayton says one part of his routine hasn’t changed. Whenever he has a quiet moment in his room, he likes to visualize himself making plays on the field. It could be beating a tackle off the edge. Or strip-sacking an unsuspecting quarterback. Or celebrating with a teammate after seeing him make a play.

Clayton has already started to visualize what his first big play for Georgia Tech will feel like.

After a year-and-a-half of persevering, he won’t have to wait much longer to turn it into reality.