Its most famous head coach, John Heisman, was born in Cleveland, and the Football Bowl Subdivision boasts eight different options, second most in the country behind Texas.  Yet in its 126-year football history, Georgia Tech, remarkably, has never played a team from the state of Ohio.

“He definitely put Youngstown, Ohio, on the map,” the redshirt senior said of his father, Clinton Sr., a former schoolboy standout at Ursuline High who later played running back at the University of Illinois.  Lynch still has plenty of family members – grandparents, aunts, uncles, cousins – who live in the area.

He also offered a scouting report on the differences between him and his Dad as ball carriers.

“He was more powerful. He had a great combination of attributes. He just made plays,” said Lynch, whose family now calls Norcross, Ga., home.

Clinton Lynch's father, Clinton Lynch Sr., was also a dual threat out of the backfield at Illinois and Ursuline H.S. in Youngstown, Ohio

Aside from an Ohio opponent, Georgia Tech fans could witness something else unprecedented Saturday.  According to media relations director (and Ohio native) Mike Flynn, Georgia Tech has never had a player record 1,000 rushing and 1,000 career receiving yards. With 26 more receiving yards against the Falcons, Lynch would become the first.

“It was definitely a surprise to me, because I don’t really pay that much attention to stats like that. It’s definitely a blessing and I’m looking forward to it,” Lynch said.

Opposing defenses might beg to differ. Lynch’s yards have often come in large chunks, a big-play ability he first showcased as a redshirt sophomore in 2016. In combined 53 rushes and receptions that year, Lynch averaged a staggering 17.1 yards per touch. Six of his touchdowns covered 40 or more yards.

Those numbers tapered off in 2017 as he struggled to regain his form following a leg injury. Now fully healthy, Lynch has once again started to rekindle that explosive, dual-threat ability at A-back. It first appeared Sept. 8, when he reeled in an 81-yard touchdown pass from quarterback TaQuon Marshall against USF (below). With it, Lynch became just the second player in school history to record multiple 80-yard catches in his career. 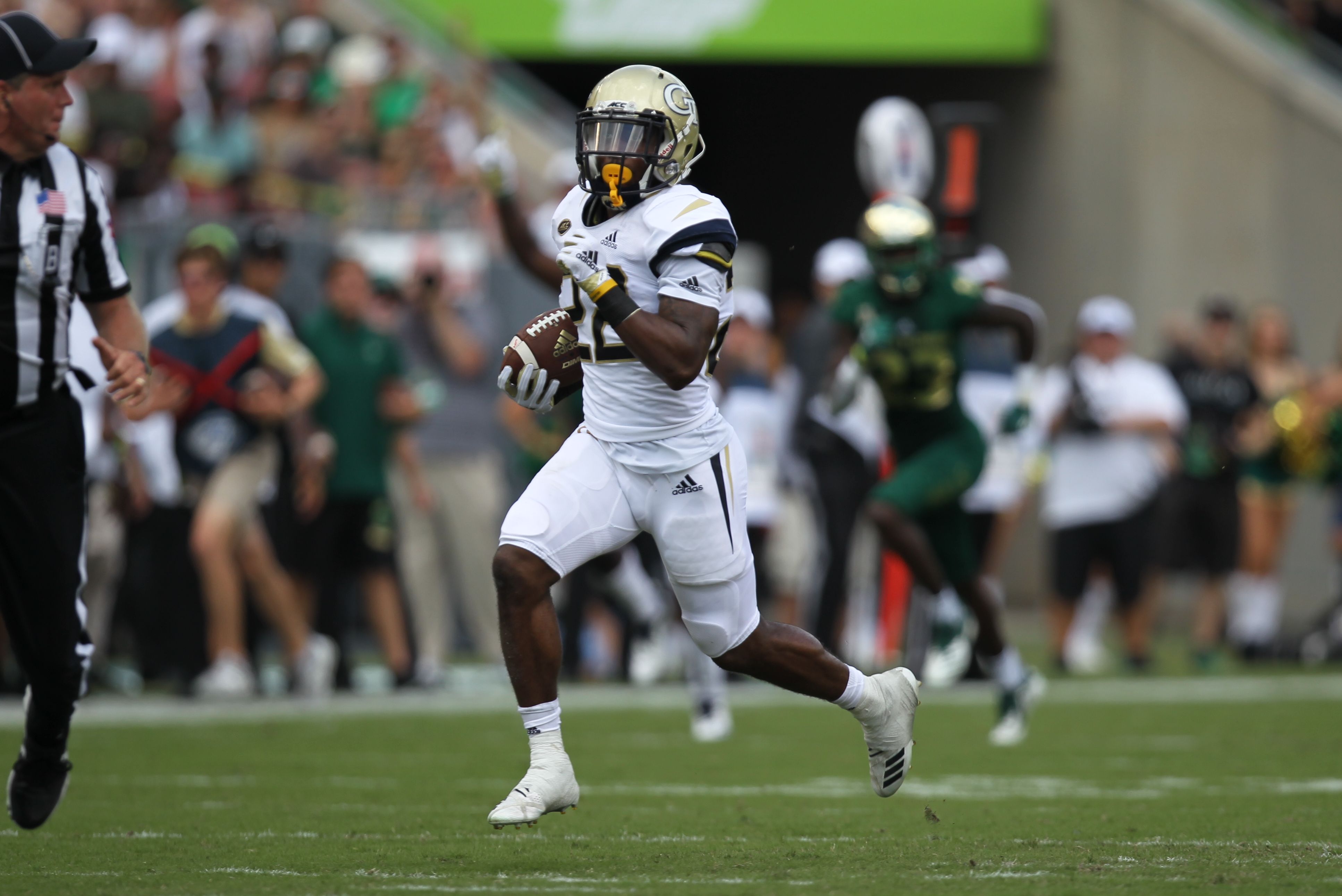 He caught another touchdown pass against Clemson last week, but Lynch drew more gasps for his running, one-handed grab on a 4th-and-7 earlier in the drive. It was a flashy play, but for the low-key Lynch it barely even registered.

“At first I didn’t know it was one-handed. Somebody told me on the sideline. I just wanted to make the catch,” he said.

Lynch chuckled at the notion he’d ask Marshall to dial up the record-setting pass on the first play against Bowling Green. Like the rest of his teammates, he’s more concerned with cleaning up the fundamentals that have abandoned them at inopportune times in losses to USF, Pittsburgh and Clemson.

Lynch says pitch relationship has been a particular emphasis this week.

“Me and TaQuon haven’t really been in sync like that the last couple games,” he explained. Lynch’s first carry of the season, a pitch against Alcorn State, went for 25 yards. His next four have only netted him two yards, with a pair of fumbles causing his average to spiral.

“It’s all about spacing. We have to match the quarterback’s hips and he has to just get it to us in space. The rest will take care of itself with good blocking,” he added.

Lynch’s feelings – disappointed but undaunted – reflected the attitude of many inside the Georgia Tech locker room this week. As uneven as their performances have been, the Jackets know they’re not that far from realizing their potential. The improvements they need are subtle, not sweeping. There’s urgency but not panic. Georgia Tech may also get some cooperation from Bowling Green, which ranks last in the FBS in rushing defense (333.5 yards/game) and has allowed 44.0 points per game.

“Everybody is eager for a win. There’s a lot of energy, a lot of people flying around,” Lynch said of practice this week.