Inside The Chart: Flex on 'Em

Jahaziel Lee has already learned a key difference about being a two-way player.

During games, offensive and defensive linemen often sink their 300-pound frames into metal folding chairs following changes in possession. They’re usually arranged in a semi-circle so their position coach can talk to them.

Those chairs may not be comfortable, but on a sweltering game day they’re an aluminum oasis, giving linemen a precious few minutes to catch their breath and get off their feet.

Lee no longer has that luxury. The 6-2, 300-pound senior, newly minted as both an offensive and defensive lineman under head coach Geoff Collins, is now engaged in his own hurry-up drill on the Georgia Tech sideline.

Collins has long been a believer in “positional flexibility,” cross-training players at different positions in order to maximize their value. With the Yellow Jackets depleted on the defensive line, Lee –  a veteran of 17 starts at center and tackle – gladly heeded Collins’ casting call, repping at defensive tackle during the spring.

Not all of Tech’s two-way experiments lasted. Lee’s did. And last Thursday, that experiment finally entered its rollout phase. The Ponchatoula, La., native made his debut as a two-way player against No. 1 Clemson, logging 20 snaps on offense and 16 snaps on defense.

“It did feel weird. I felt a little nervous,” said Lee of his first defensive series, which came late in the first quarter.

“But this is my primary position. These are my roots.”

Indeed, Lee had never played a snap of offense before arriving at Tech in the summer of 2016. Playing in the largest high school classification in Louisiana, he earned all-district honors at defensive end as a senior. Lee took to his new position quickly at Tech, earning his first start at left tackle by week 10 of his freshman year. He appeared in 31 games over his first three seasons.

Yet when the opportunity presented itself, Lee couldn’t resist the siren song of his old side.  He successfully lobbied Collins to try him at defensive tackle during the spring. Collins and defensive line coach Larry Knight saw enough flashes to make the two-way experiment official. The move was confirmed in August when Lee switched from No. 95 to No. 51 to comply with NCAA rules for the type of number an offensive lineman must wear. Lee says he chose the number because his cousin, Reginald Walker, a second-team all-Big 12 defensive lineman at Kansas State, also wears it. 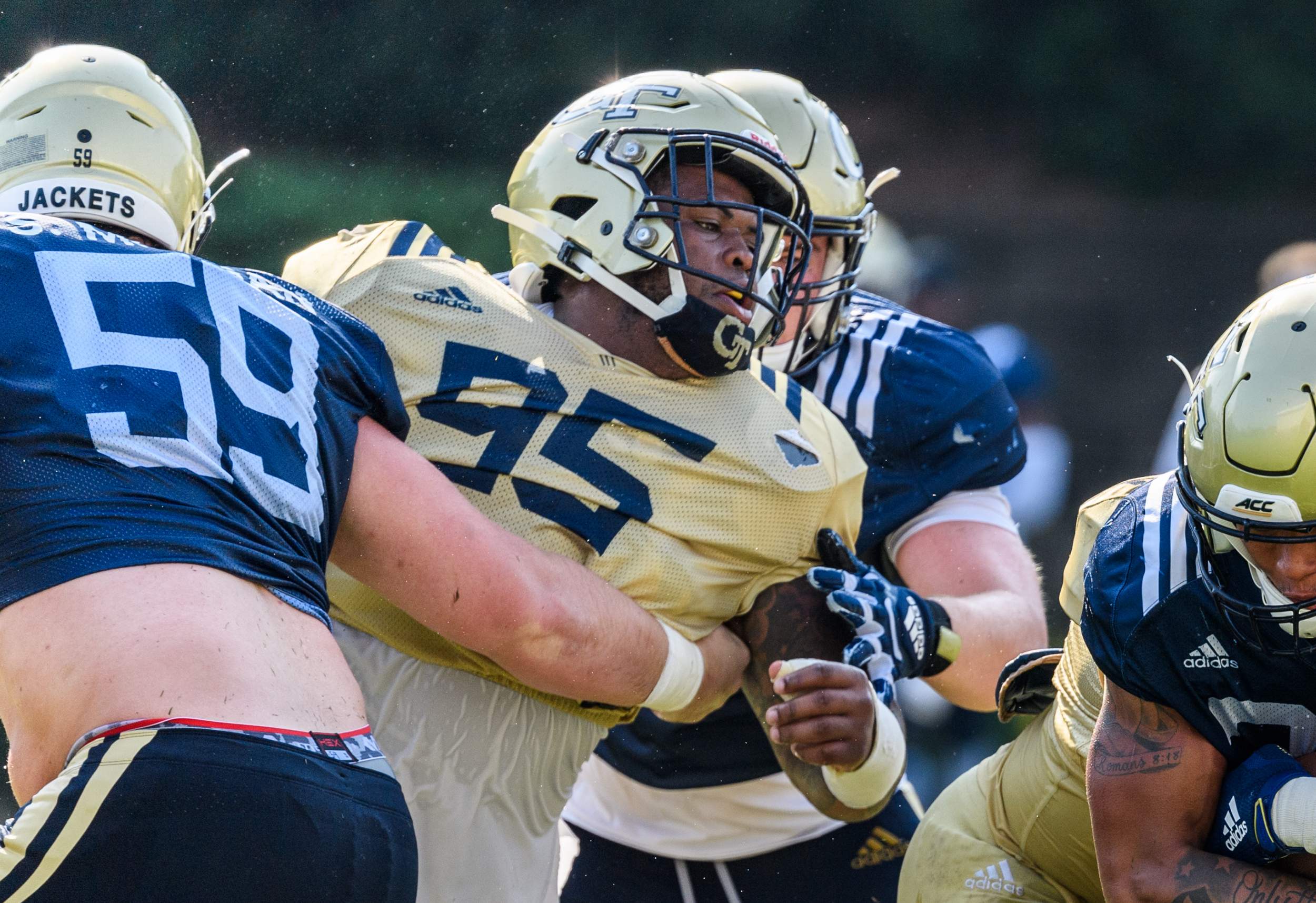 Before it was fully determined that Jahaziel Lee would play both ways this season, he was poised to wear No. 95. He changed to No. 51 to comply with the NCAA rule that offensive linemen must wear jersey numbers between 50-79.

“He has a natural take-off.  He’s a good kid.  He listens,” Knight said of Lee during the preseason.

Pitching in is nothing new for Lee, who used to pour and lay cement on his Dad’s construction crews growing up (it also makes him the rare college football player who’s adept at both bull rushing and bull floating). He has also been recognized for frequently pitching in around the community as a nominee for the 2019 AFCA/Allstate Good Works Team and Wuerffel Award, two of college football’s top honors for community service.

On the field, he says his three years on the offensive line have made him a savvier player now that he’s back on defense.

Lee knows his usage will vary week-to-week based on where the coaches need him. When Georgia Tech (0-1, 0-0 ACC) faces USF (0-1, 0-0 AAC) at Bobby Dodd Stadium on Saturday, he could play the majority of his snaps on the offensive front. Or he could be needed in run support, helping stifle the Bulls’ 1,000-yard rusher, Jordan Cronkrite.

However it plays out, Lee will continue to stay ready, devouring film even when he’s not practicing on that side of the ball that day. He takes pride in being a rarity in major conference football, a 300-pounder who can play both ways. As his senior season gets underway, he says he enjoys being a poster boy for Collins’ positional flexibility.

“I love it. It shows my versatility. It shows what I’m capable of. And it’s going to help me in the long run.  It shows my value to a team,” he said.

Besides, Lee added, “I’m becoming better each day at both.”

Someone may want to pull up a chair.