Inside The Chart: Behind Enemy Lines

THE FLATS — Isolated from their peers.  Wary of their surroundings.  Serious about their duties.

In this new era of social distancing, we’ve all had to adjust our habits.  But perhaps Georgia Tech fans can draw inspiration from the members of the football staff who have to tap into those qualities the most.

The student managers assigned to the opposing team’s sideline on game day.

Okay, maybe we’re exaggerating.  But for each game, Georgia Tech’s equipment staff designates a pair of students to serve as the team’s ball boys (or girls) on the opposing sideline. This year the role rotated among three people: Butcher, fourth-year Hersh Gupta, and Bobby Henner, who graduated with his master’s in structural engineering in December.  Together, they got a unique experience compared to their hundred-plus peers on the Georgia Tech staff.

I had to know: what’s it like being the only Tech staffers in enemy territory?

“It’s definitely a feeling of walking in to the unknown. You never know how the other sidelines are when you’ve never been there before,” said Gupta, a Los Angeles, Calif., native who graduates this spring with a degree in mechanical engineering.

A point of clarification: yes, they wear Georgia Tech gear and handle Georgia Tech’s footballs, but on game day these managers don’t work for Georgia Tech per se. Technically they’re considered part of the officiating crew. In college football, each team uses its own footballs for offensive series; when there’s a change in possession or a ball sails out of bounds, the nearest manager – you can spot them by the fluorescent vests they’re required to wear – tosses a fresh football to the referee he can spot it quickly. 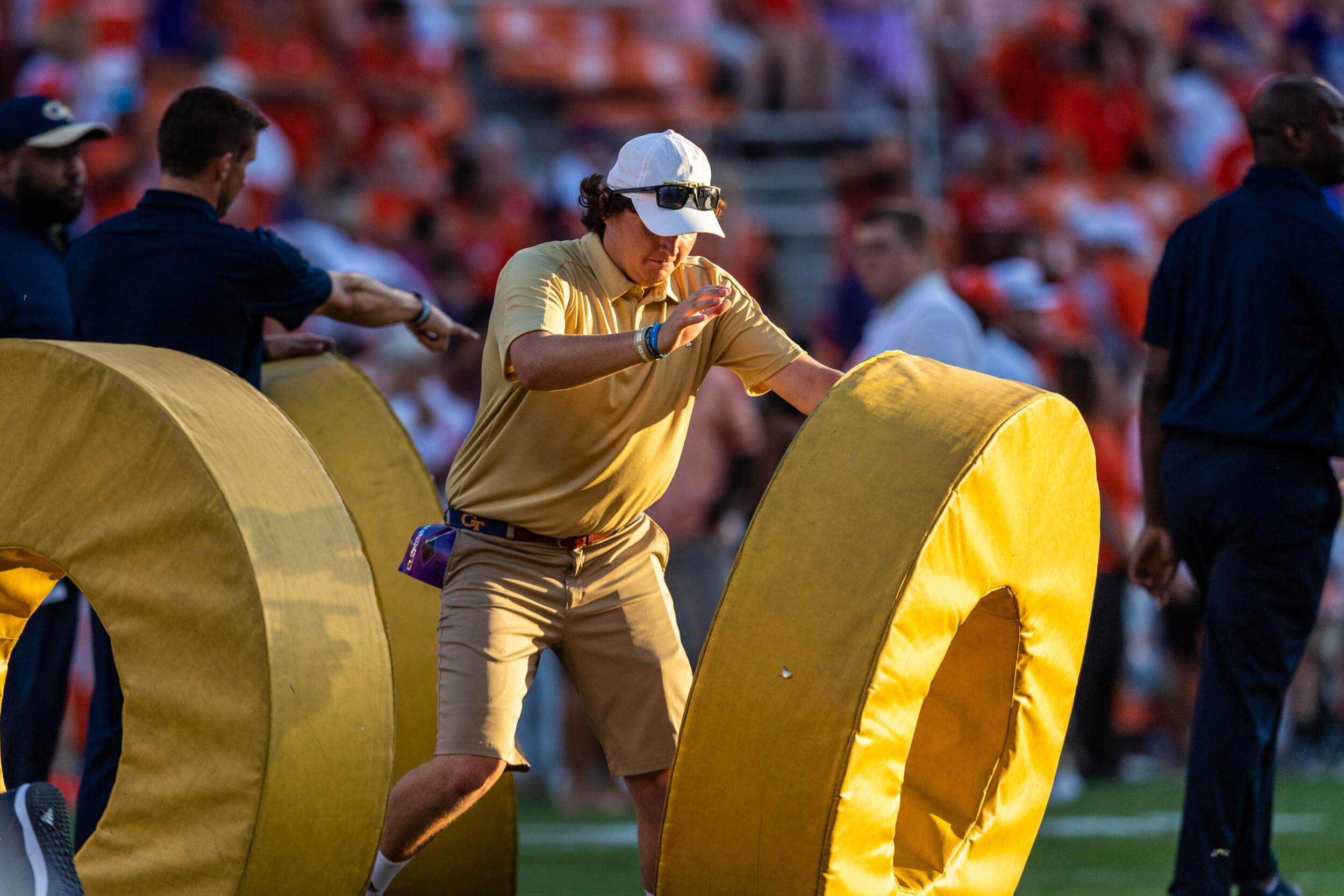 Bobby Henner, who graduated with his master’s in structural engineering in December, helps during Georgia Tech’s tackling circuit at practice

There’s more choreography to it than you think. When the Jackets are on offense, one manager sets up near the line of scrimmage while his partner moves 10 to 15 yards downfield in anticipation of the next spot. Along the way, they have to make sure they’re not interfering with the opposing coaches.

“There are definitely times when you have the ‘get back’ coach or those kinds of guys there. Inevitably there are so many people in the same place. Usually I try and stay out of their way, but sometimes we’ll get tangled up,” Butcher explained.

Yes, the strength and conditioning coaches – the brawny guys tasked with keeping the sidelines orderly and clearing space for their assistant coaches – can get a little territorial.

“I’ve had strength coaches bump me when I’ve been running balls, trying to keep me out of the way,” Gupta said, adding that the interactions can be persistent but never confrontational.

Their proximity to the coaches and players also means they can overhear some interesting snippets of conversation. Most of the time it’s indecipherable, play-calling jargon. Occasionally they’ll hear something unflattering about one of their classmates.

Butcher says it all evens out.

“It’s hard to hold back a laugh when somebody breaks off a big run and they get upset about it,” he said.

The role has other occupational hazards. Personnel groups can swallow them up when they rush onto the field (an assistant coach usually gives them a heads-up so they can avoid getting stampeded). Henner recalls a time against Duke in 2018 when a kick return veered toward the Blue Devils’ sideline. Safety Christian Campbell locked up with a Duke special teamer, and their tussle spilled into the bench.

“The whistle blows. I go to throw the ball in. They just hit me from behind and I go face first into the turf right after I get my ball off to the official,” said Henner, a Winnetka, Ill., native who spent five seasons with the Jackets. 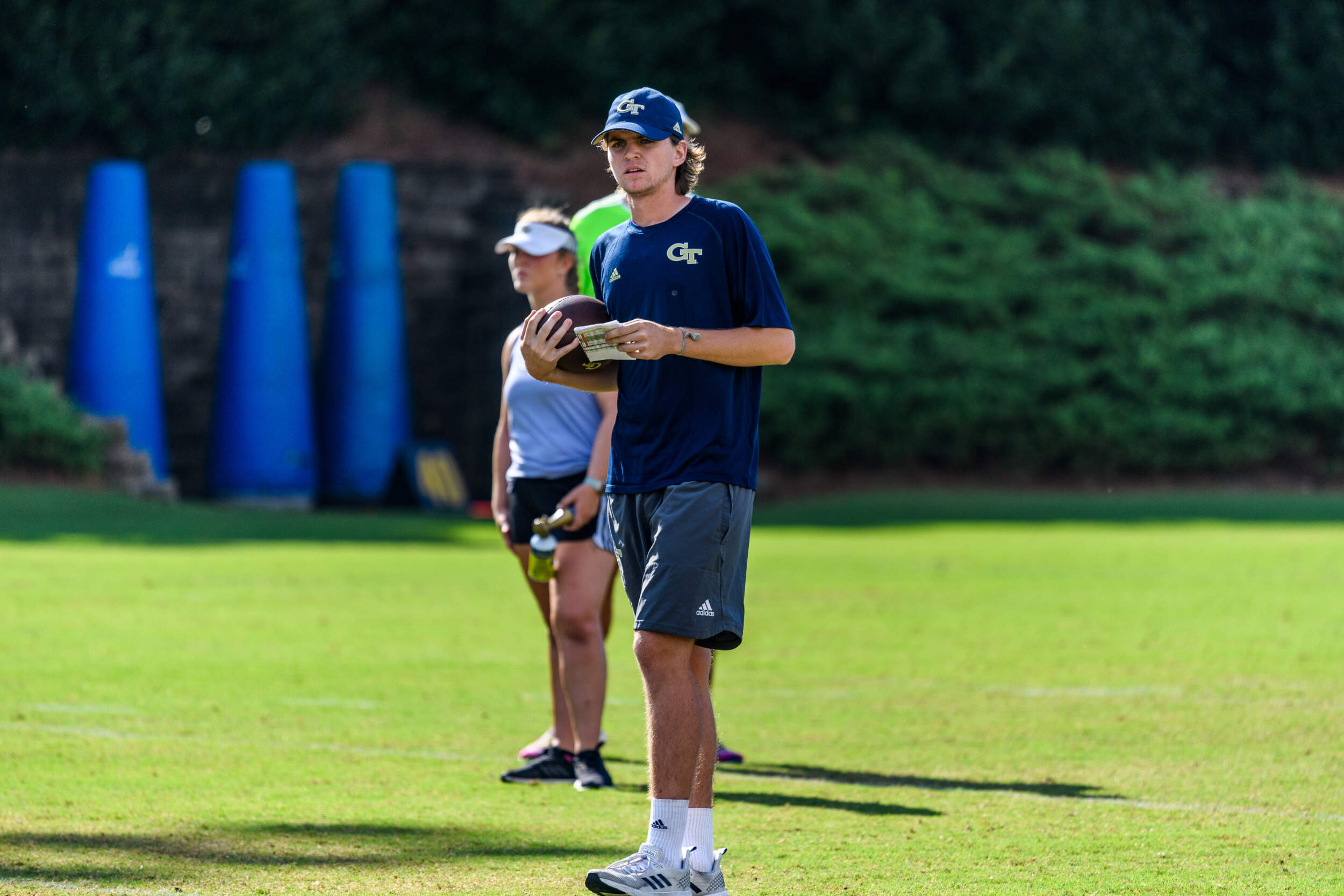 Braxton Butcher, a rising third-year industrial engineering major from Dacula, Ga., readies the next ball for 7-on-7 play.

Other times the managers need to catch up to the action, not avoid it. When Georgia Tech breaks off a long play, they immediately have to sprint to the next spot to reconnect with the referee.

“After the game I’ll look at my watch. Sometimes I’ve run three or four miles just during the game,” Henner said.

The managers also have another important task: making sure an opponent doesn’t run off with one of their footballs following a turnover. It can be easier said than done. Gupta once had to burrow through a mass of North Carolina players to retrieve a ball when he got bear-hugged – playfully – by a defensive tackle trying to hold him back. Henner remembers a certain Temple player getting carried away following a takeaway.

“Before I could get to him, he threw the ball up to his dad in his stands. At that point, there’s nothing I can do to get it back,” he said.

But exuberance is a natural emotion in football. How do Georgia Tech’s managers suppress the urge to celebrate after a big play – especially when they look across and see the rest of their colleagues going nuts?

Part of it is professionalism. Since they’re an extension of the officiating crew, they have to keep a referee’s air of impartiality. They’re often too focused on their job to get swept up in the emotion.

“When you’re right next to the defensive coordinator, they definitely would not want you to be jumping up and down and being excited,” Butcher said.

Not that they don’t have their temptations. 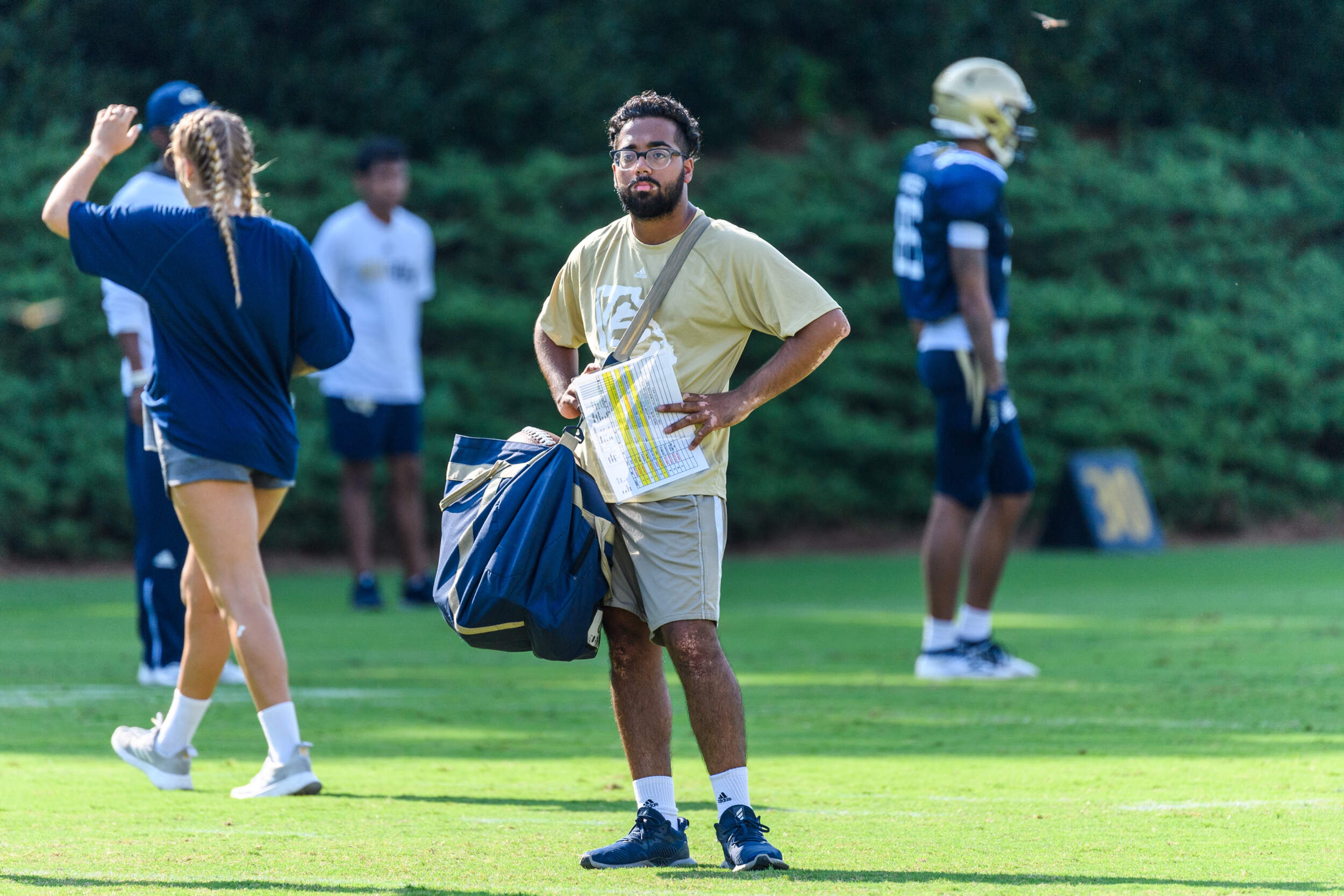 Hersh Gupta, a Los Angeles, Calif. native who graduates this spring with a degree in mechanical engineering, worked with the offensive line during practices this year .

“You’re a Tech fan, you go to the school, so it’s hard to bottle it in,” Gupta admitted. “But doing it enough times, I’ve become accustomed to it. I haven’t had any issues – at least recently.”

Butcher laughed. “Hersh is a very expressive person,” he said.

Besides, the managers have a safe zone for celebrating. After Tech scores a touchdown, the managers from both sidelines will meet behind the goalpost to grab the extra point once it comes off the netting.  Much like the end zone for players, that’s where they can cut loose.

“After touchdowns you really get to let off that steam,” said Henner, who usually celebrated Georgia Tech scores by chest bumping with Gupta.

But despite being outnumbered, Gupta, Henner, and Butcher all insist the job isn’t that awkward. Much like Georgia Tech’s coaches, the opposing coaches respect that they’re working for the officiating crew, helping the game run smoothly. They don’t feel any standoffishness because they’re associated with the Yellow Jackets. They usually have a good rapport with the opposing student managers, who help them feel comfortable as well. One head coach even said if they ran into any problems on his sideline, they should come see him.

(That same hospitality, it should be noted, extends to the visiting managers on Georgia Tech’s sidelines.)

And even though they’re separated from their peers, the job gives them an unforgettable vantage point for some thrilling Georgia Tech moments. Henner manned the Georgia sideline during the 2016 edition of Clean, Old Fashioned Hate in Athens; Lance Austin’s fourth quarter interception to set up the game-winning touchdown happened directly in front of him. He and Butcher also worked the Miami sideline in October, meaning they had an up-close view of the game-clinching fourth down measurement in overtime.

“We thought it was going to be a first down. It was short by inches. And me and him just kind of look at each other.  We’re like, ‘Oh my God.  That just happened,’” Butcher remembers.

It’s those memories, and countless others, that illustrate why they’ve loved serving as student managers.  That hard work and dedication hasn’t gone unnoticed by Georgia Tech’s coaches.

“Coach Collins does a really, really good of making sure we feel included. He’s very good about making sure people say ‘please’ and ‘thank you’ to your equipment people. It’s really nice,” said Butcher.

Like all of us, he wouldn’t mind having some company again soon.

Even if it comes in enemy territory.