THE FLATS – Georgia Tech will celebrate the legacy of its first African-American football student-athletes with a series of events from Sept. 27-29. The celebration will be held in conjunction with Georgia Tech football’s home game versus Bowling Green on Sept. 29 at Bobby Dodd Stadium.

The eight student-athletes that will be honored include: 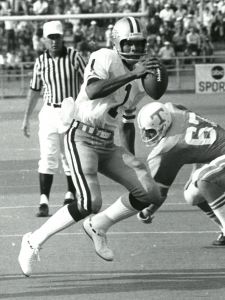 EDDIE McASHAN
Eddie McAshan was the first African-American to receive a football scholarship at Georgia Tech, the first African-American to be a starter for Georgia Tech football and the second African-American to be a starting quarterback for a major college football program in the Southeast (following Wake Forest’s Freddie Summers). McAshan threw for 4,080 yards and 32 touchdowns in 36 career starts for the Yellow Jackets. He broke 17 school records and still ranks among Georgia Tech’s all-time leaders in passing yards (eighth), touchdown passes (sixth) and completions (360 – sixth). His five touchdown passes against Rice in 1972 remain tied for the most in a single game in Tech history. He compiled a 22-13-1 record as a starter and helped lead the Jackets to three bowl appearances in three seasons. He also became the first Georgia Tech African-American ever selected in the NFL Draft when the New England Patriots picked him in the 17th round in 1973. He graduated from Georgia Tech in 1979 with a degree in industrial management. 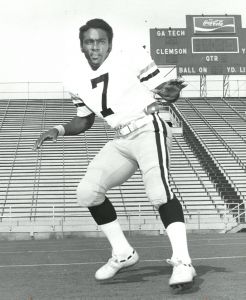 KARL BARNES
Karl Barnes was the first African-American football student-athlete to enroll at Georgia Tech and go on to play in a varsity game for the Yellow Jackets, as he was invited to walk-on under head coach Bud Carson in 1969 and lettered as a defensive back in 1971 and 1972. He was also a member of Tech’s track and field team. He earned a bachelor’s degree in industrial management (1973) and a master’s degree in architecture (1977) from Georgia Tech, as well as an MBA from the University of Pennsylvania’s Wharton School of Business. As an alumnus, Karl has served on numerous boards at Georgia Tech, including the boards of the Alumni Association, the Athletic Association, the Alexander-Tharpe Fund, the Alumni Association and the GT Foundation. Barnes is a member of the ANAK Society and an A-T Fund Life Member. 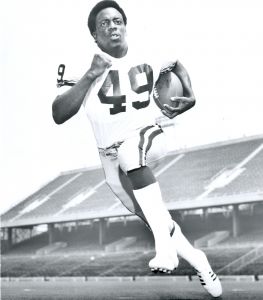 GREG HORNE
Greg Horne was the second African-American to receive a football scholarship at Georgia Tech. He appeared in 33 games for the Yellow Jackets from 1971-73 and was the team’s leading rusher in 1971 (500 yards) and ’72 (538). He became the seventh Tech student-athlete to ever rush for 1,000 yards in a career, finishing his three collegiate seasons with 1,425 rushing yards and 11 touchdowns. He also caught 13 passes for 128 yards and a touchdown. As the team’s leading rusher, he helped lead the Yellow Jackets to bowl appearances in 1971 (Peach Bowl) and 1972 (Liberty Bowl). 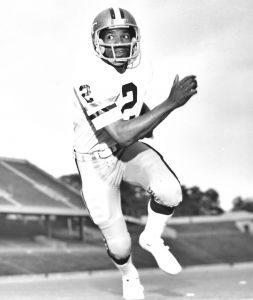 CLEO JOHNSON
Football student-athlete Cleo Johnson played two seasons for Georgia Tech in 1972 and 1973 after transferring from Ferrum Junior College. He played wide receiver as a junior in 1972 and caught two passes for 27 yards as a member of the Yellow Jackets’ Liberty Bowl championship team. He moved to running back the next season and was the team’s leading rusher with 451 yards. He also caught six passes for 62 yards out of the backfield as a senior in ’73. 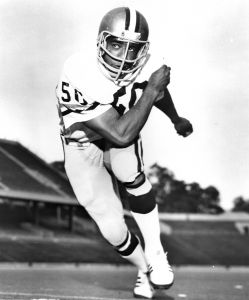 JOE HARRIS
Joe Harris was the third African-American to receive a football scholarship at Georgia Tech. From 1972-74. He put together one of the most prolific careers ever by a Tech defensive student-athlete. Despite playing just three seasons (the NCAA didn’t make freshmen eligible for varsity games until ’72), he recorded 415 career tackles, which still ranks eighth in school history. His 188 tackles as a senior in 1974 have remained a single-season school record for 43 years (the next-highest total is 171). He helped lead the Yellow Jackets to a thrilling 31-30 win over Iowa State in the 1972 Liberty Bowl, as Tech’s defense squelched ISU’s two-point conversion attempt with less than two minutes to go in the game to seal the win. He became the second Georgia Tech African-American selected in the NFL Draft when the Chicago Bears picked him in the eighth round in 1975. He went on to play in 83 games over six NFL seasons and was inducted into the Georgia Tech Sports Hall of Fame in 2000. 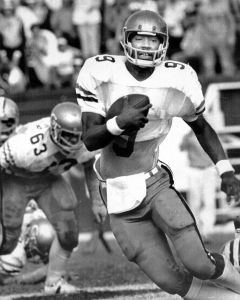 RUDY ALLEN
Rudy Allen was a member of Georgia Tech’s football program from 1972-75. He was a co-captain and starting quarterback for the Yellow Jackets’ undefeated freshman team in 1972. He went on to appear in 33 games as a varsity QB from 1973-75, finishing his career with 648 passing yards, 295 rushing yards and 11 total touchdowns (seven rushing, four passing). After a brief NFL career with the Chicago Bears, he returned to Tech and received a bachelor’s degree in industrial management. 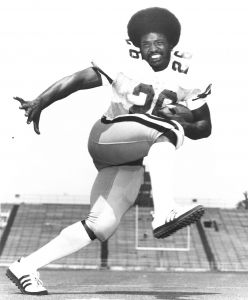 TOMMY CROWLEY
Football student-athlete Tommy Crowley played two seasons at Georgia Tech (1974 and ’75). He appeared in 22 games as a running back for the Yellow Jackets, averaging 5.0 yards per rush for his career. 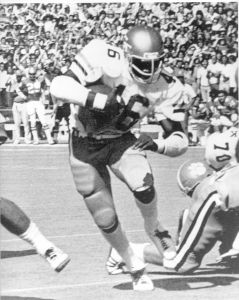 DAVID SIMS
David Sims remains one of the most prolific rushers in Georgia Tech football history. He was a running back for the Yellow Jackets from 1974-76 and became the school’s all-time leading rusher with 2,274 career yards, a mark which still ranks 11th in Tech history. He was the Jackets’ leading rusher each of his three seasons, including 881 yards as a sophomore in 1974 and 803 yards as a senior in ’76. He became the third Georgia Tech African-American ever selected in the NFL Draft when the Seattle Seahawks picked him in the seventh round in 1977. He went on to rush for 1,174 yards in 29 games as a pro and led the NFL with 15 rushing touchdowns in 1978 before suffering a career-ending injury three games into the 1979 season. He returned to Georgia Tech after his first season with the Seahawks to obtain his degree in industrial management in 1978. When his professional football career ended, he worked for Weyerhaeuser Company for five years before starting his own reprographics company in 1984. That company, which started with five people, eventually grew to over a hundred. He was inducted into the Georgia Tech Sports Hall of Fame in 1985.

The public is invited to celebrate the groundbreaking student-athletes during two events:

The campus panel will feature discussion among the honorees about why they chose to attend Georgia Tech, their experiences as student-athletes at Tech, their journeys after GT and their legacies. The honorees will also take questions from the audience. Moderated by Dr. Othello Harris, associate professor of sociology and gerontology at Miami University (Ohio), the event is open to all members of the campus community (students, faculty and staff) but space is limited. To secure a spot at the highly anticipated event, click HERE to RSVP.

All eight honorees will be recognized during in-game ceremonies. Additionally, McAshan and Horne will serve as the Yellow Jackets’ honorary captains for the contest. Tickets are still available – click HERE or call 1-888-TECH TIX for more information or to purchase tickets.