ATLANTA – Georgia Tech shot 62.1 percent from the field in the second half and forced 21 turnovers for the game on its way to a dominant 79-62 victory over No. 20 Kentucky on Sunday evening at State Farm Arena in Downtown Atlanta.

Georgia Tech was led by senior forward Moses Wright, who tallied 21 points and eight rebounds in the triumph. Wright topped the 20-point plateau and led the Yellow Jackets in scoring for the third time in three games this season and, at 24.0 points per game, leads the Atlantic Coast Conference in scoring.

Tech, which lost its first two games of the season to Georgia State and Mercer, never trailed after the 4:14 mark in the first half against the 20th-ranked Wildcats. A 15-5 run in the Jackets favor at the end of the first half gave them a 34-27 advantage heading into intermission. Georgia Tech stayed hot in the second half, making 18-for-29 field goals after the break, including five 3-pointers.

For the game, Tech shot 51.7 percent from the field.

In addition to their own hot shooting, the Yellow Jackets saw the return of the stifling defense that defined their fifth-place ACC finish a season ago. While forcing Kentucky to turn the ball over 21 times, the Jackets also held the Wildcats to just 44.9% shooting on the evening (22-of-49). Fifteen of Kentucky’s 21 turnovers came on steals by Tech defenders. Usher and juniors Khalid Moore and Michael Devoe scooped up three steals apiece, and seven different Yellow Jackets earned at least one steal.

Leading the way for Kentucky was Terrence Clark, who finished with 22 points. UK’s Isaiah Jackson snagged a game-high 12 rebounds.

Sunday’s win was Georgia Tech’s second over a nationally ranked opponent in its last 10 games, a stretch that began with a 64-58 toppling of No. 5 Louisville on Feb. 12 of last season. The Holiday Hoopsgiving win at State Farm Arena was the Jackets’ first over a top-25 team away from McCamish Pavilion since it won at No. 23 Miami on Jan. 28, 2015, and also marked the first time that one of John Calipari’s assistant coaches has beaten him head-to-head in 18 meetings.

Georgia Tech plays its first true road game of the season on Wednesday when it visits Nebraska for the ACC/Big Ten Challenge. Tipoff is set for 7:15 p.m. EST and the game will be televised on ESPNU. 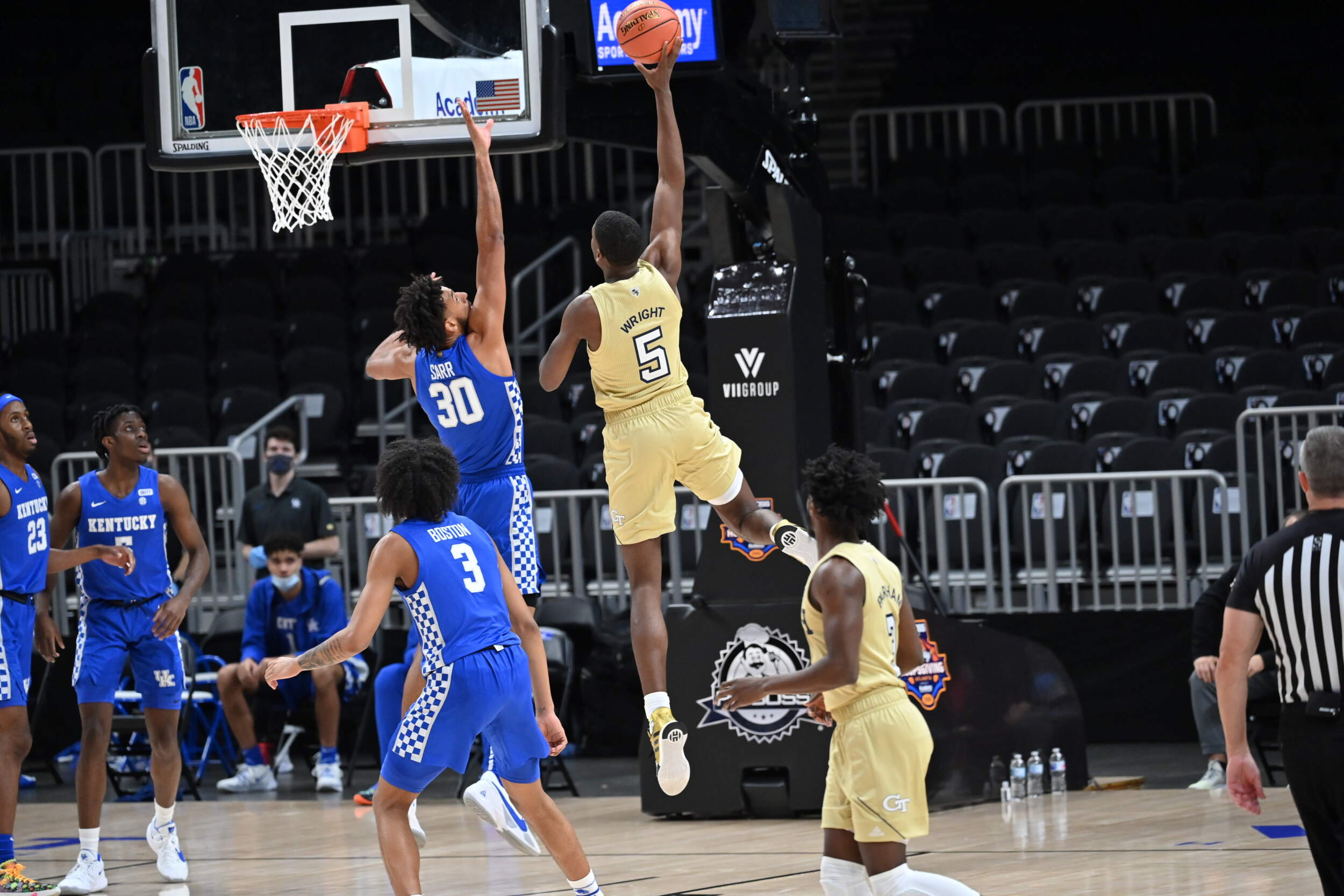 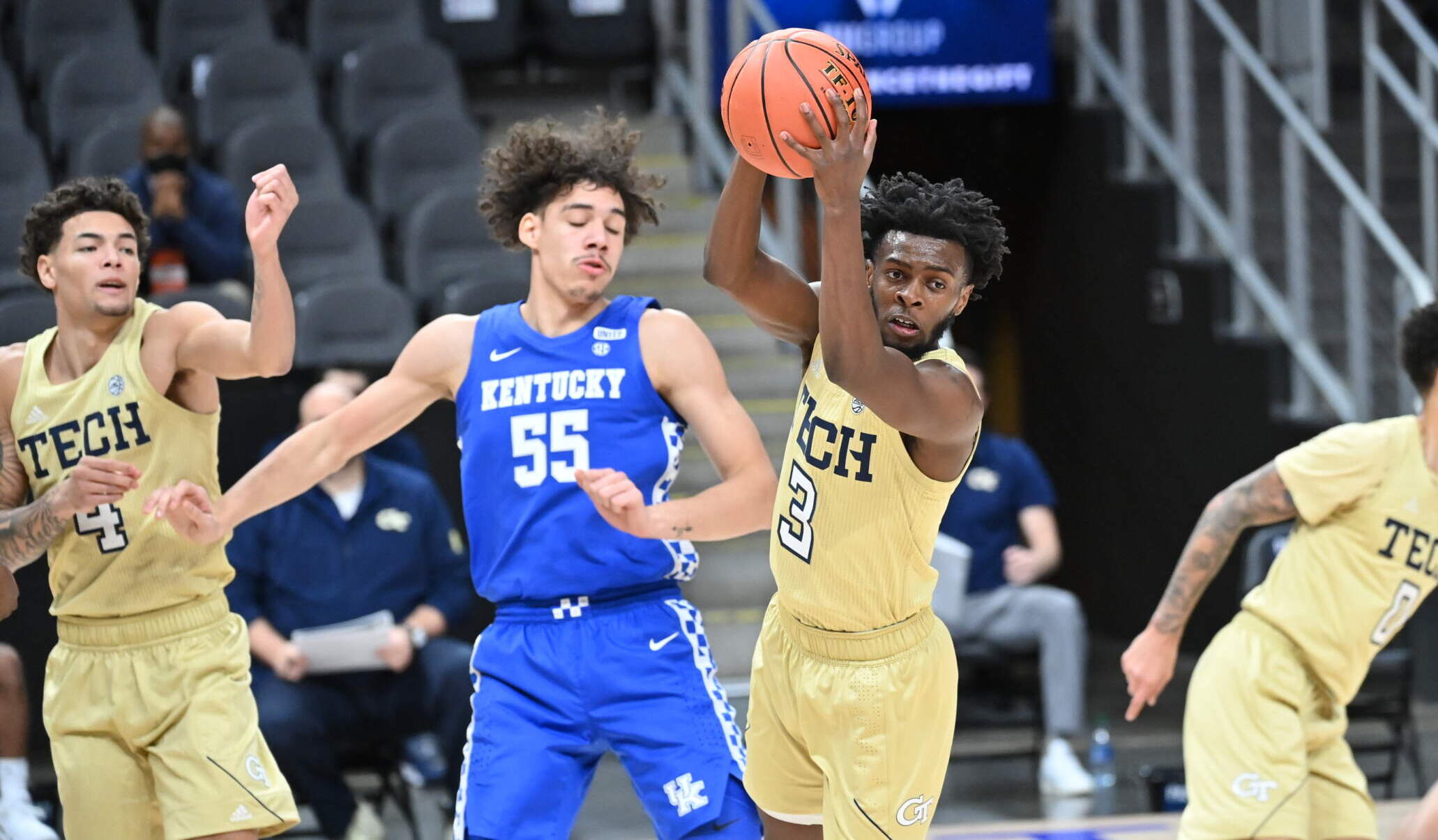 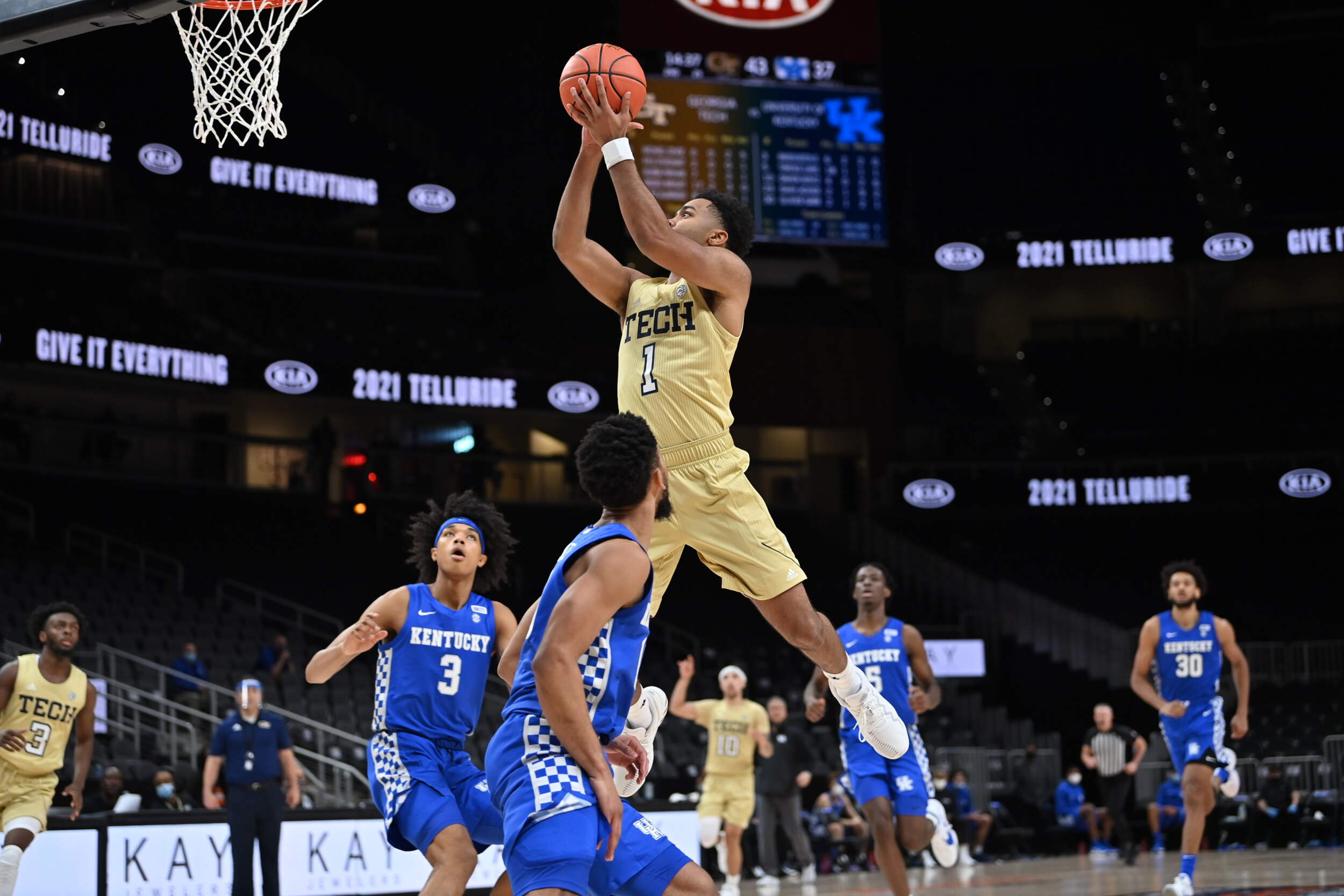 Kyle Sturdivant (1) scored 15 points on 5-of-6 shooting from the field and 4-of-4 from the free-throw line in the Jackets’ win over Kentucky (photo: Danny Karnik).