A 2005 Georgia Tech graduate and four-year letterwinner for the Yellow Jackets from 2001-04, Burton returns to The Flats after spending the 2018 season as defensive backs coach on Collins’ staff at Temple. With Burton coaching Temple’s DBs, the Owls rank fifth nationally with 18 interceptions in 2018. In addition to being a student-athlete at Tech, he also served as a graduate assistant under head coaches Chan Gailey and Paul Johnson from 2005-08.

“Nathan is a Georgia Tech grad. He has a tremendous amount of energy and is innovative,” Collins said of Burton. “He was a great player, then a great graduate assistant for us at Georgia Tech. It’s been a pleasure following his career. He did a great job for us in the secondary at Temple, producing one of the top pass defenses in America. I’m excited to bring his expertise to Georgia Tech.”

Popovich has 14 years of coaching experience at the collegiate and professional levels, most recently as cornerbacks coach at Boise State in 2018. In his lone season on Boise State’s staff, the Broncos rank among the nation’s top 40 teams in third-down defense (.311), takeaways (24), scoring defense (22.1 ppg) and total defense (355.9 ypg). He and Collins first coached together as members of Florida International’s staff in 2010 (Collins as defensive coordinator, Popovich as defensive backs coach), where they helped lead FIU to the school’s first-ever Conference USA championship and bowl berth.

“I’m very excited to have Jeff join our coaching staff here in Atlanta,” Collins said about Popovich. “We had great success together at FIU coaching an elite, conference-championship defense. He will bring tremendous energy, enthusiasm and expertise to our secondary and our special teams at Georgia Tech.” 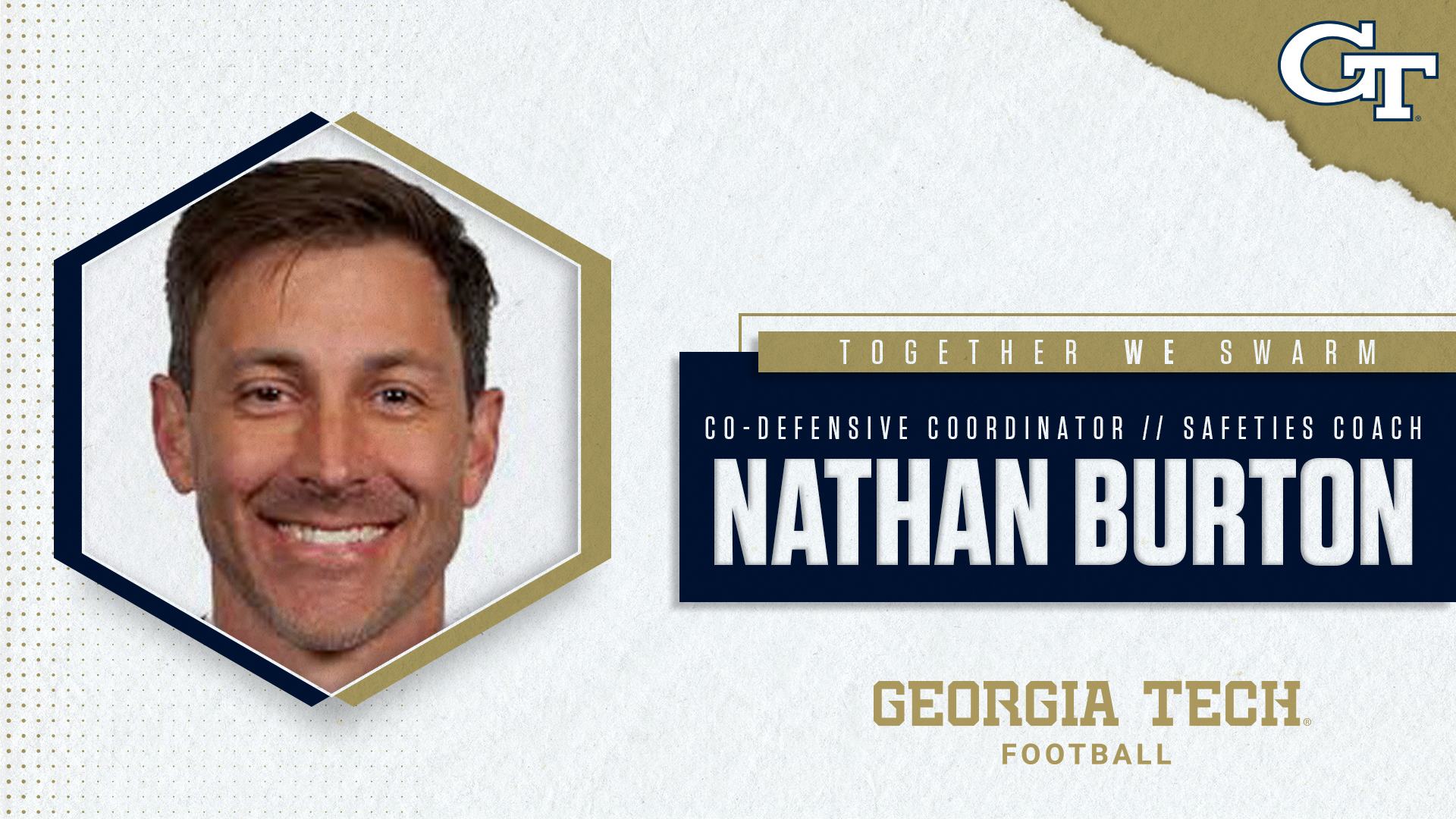 Prior to Burton’s successful season at Temple, he spent the 2017 season in the Atlantic Coast Conference as a defensive quality-control assistant at NC State. His 14-year coaching career includes five seasons as a defensive coordinator – three at West Alabama (2014-16) and two at Shorter (2012-13). His unit at West Alabama led the NCAA Division II Gulf South Conference in rushing defense in 2015 and in total defense, pass defense and interceptions in 2014. At Shorter, he directed the GSC’s No. 2-ranked defense and helped guide the Hawks to a winning record in their transitional season from NAIA to Division II in 2012.

An Atlanta-metro area native (Lilburn, Ga.), Burton’s resume also includes two seasons as linebackers and secondary coach at Tennessee-Martin (2010-11) and one season as a graduate assistant Oklahoma State (2009) to go along with his four seasons as a G.A. at Georgia Tech. The Yellow Jackets earned bowl berths in each of his eight seasons as a student-athlete and graduate assistant, including three bowl wins as a player (2001 Seattle Bowl, 2004 Humanitarian Bowl and 2004 Champs Sports Bowl) and appearances in the 2007 Gator Bowl and 2008 Chick-fil-A Bowl as a grad assistant.

Burton came to Georgia Tech as a walk-on but went on to earn a scholarship and four letters as a safety. “The Admiral,” as he was known to teammates, was named the Yellow Jackets’ Lifter of the Year in 2004 in recognition of his production in the weightroom. He graduated from Tech in 2005 with a bachelor’s degree in applied biology.

Burton was a two-time all-Gwinnett County selection as a wide receiver and quarterback at Greater Atlanta Christian School. He and his wife, Britney (also a member of Georgia Tech’s Class of 2005), have four sons: Charlie, Grady, Isaac and William.

“My wife and I are honored and blessed to join Coach Collins’ staff and return to a place we both know and love,” Burton said. “Coach Collins has a passion for the Institute, the city of Atlanta and the state of Georgia and we’re excited to share in his vision for Georgia Tech. Coach Collins has been a great mentor and friend to me and I look forward to serving our student-athletes on The Flats.” 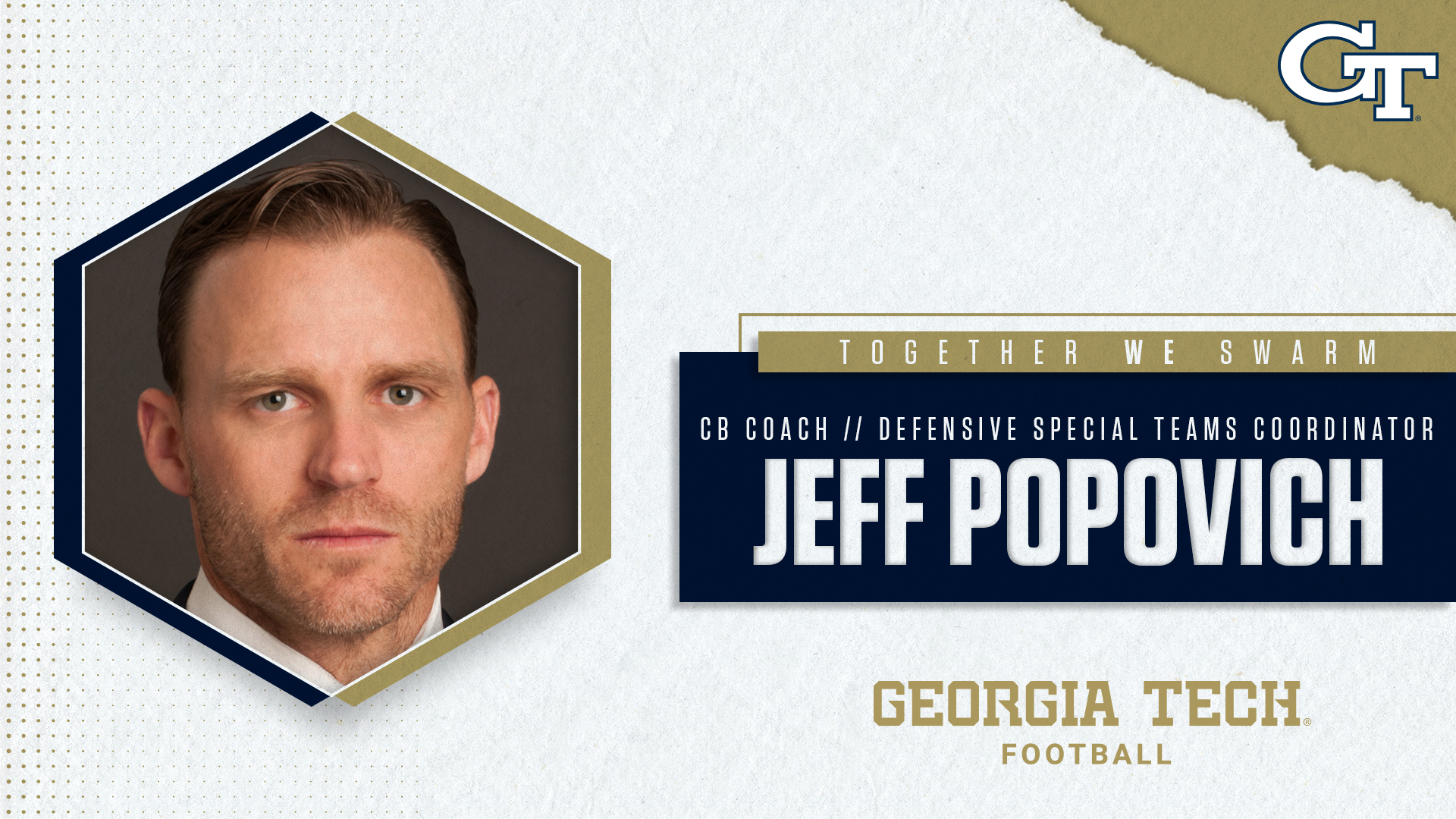 Popovich’s 14-year career includes 12 seasons at the NCAA Division I FBS level at Boise State, UTSA (cornerbacks coach – 2013-15), Florida International (defensive backs – 2007-12) and his alma mater, Miami (Fla.) (graduate assistant – 2005-06). In addition to serving as DBs coach at FIU, Popovich was also the program’s pro liaison for his entire six-season stint and was the Panthers’ special teams coordinator in his final season (2012). He also spent two seasons with the NFL’s Indianapolis Colts, first as an assistant to head coach Chuck Pagano in 2016, then as a defensive quality control assistant in 2017.

A Tucson, Ariz. native, Popovich walked on at Miami but became a major contributor for the Hurricanes as a defensive back and special teams standout, recording 154 tackles in 46 career games (1996-99). He was a three-time academic all-Big East honoree and went on to play professionally for the Tampa Bay Buccaneers (2000), NFL Europe’s Barcelona Dragons (2001) and the Atlanta Falcons (2001).

Popovich earned bachelor’s (biomedical engineering – 2000) and master’s (international finance – 2007) degrees from Miami. He and his wife, Lara, have two daughters – Sayle and Copeleigh.

“I’m excited to be a part of a program with so much tradition and success,” Popovich said. “Coach Collins is a dynamic leader with great vision. He has been a mentor of mine ever since we worked together at FIU. My family and I are honored to be Yellow Jackets and I can’t wait to get rollin’ in the 404!”