#TGW: A Look Back at Tyler Davis' Impact

As part of RamblinWreck.com’s ongoing #BestOfGT series, we take a look back to the end of the 2019 football season and a terrific story about the legacy that tight end Tyler Davis built in just one season at Georgia Tech.

#TGW: About to Be Gone, But Never To Forget

Tyler Davis wasn’t happy Saturday afternoon, yet he offered a hopeful glimpse at the return on investment that Georgia Tech football fans can expect, while suggesting that something special is happening on The Flats and that it’s a special place.

He’d just finished a college career, and a final season, that will always fetch a smile when he thinks about it, even if the win-loss record of the 2019 season will not.

Davis was a builder at Tech, and that memory will last.

Still in the uniform he didn’t want to take off long after his last college game, the co-captain’s impassioned post-game chat with media nearly fetched tears.

Davis spoke about the hard-charging, hyper-competitive and connected family-style culture that the Yellow Jackets are building under first-year head coach Geoff Collins. In turn, the coach has spared no words in complimenting the transfer tight end for his leadership in just one season at Tech.

If Davis were he a betting man, the graduate student from UConn would lay money on better days coming for Tech. He’s convinced that the development that began nearly a year ago will pay off big as a remarkably young roster grows.

“I think everything will continue to evolve and most guys will keep figuring out details. It all will come . . .” he said. “The biggest thing I’m proud of with these guys is they’re so bought in; they’re every step of the way. They want to do everything possible to give everything they have every single day, and I think that’s what I’ll take with me the most is how proud I am of these guys . . .

“If you came to practice during the week, any week, it was the same from camp, same from August. I think with that attitude, this thing is going to continue to evolve. Things are just going to continue to go up, and I have no doubt in my mind the guys are going to have a little sour taste in their mouth off the season . . . and I know they’re going to work harder here than they ever have, so it will be exciting to see what they can do.” 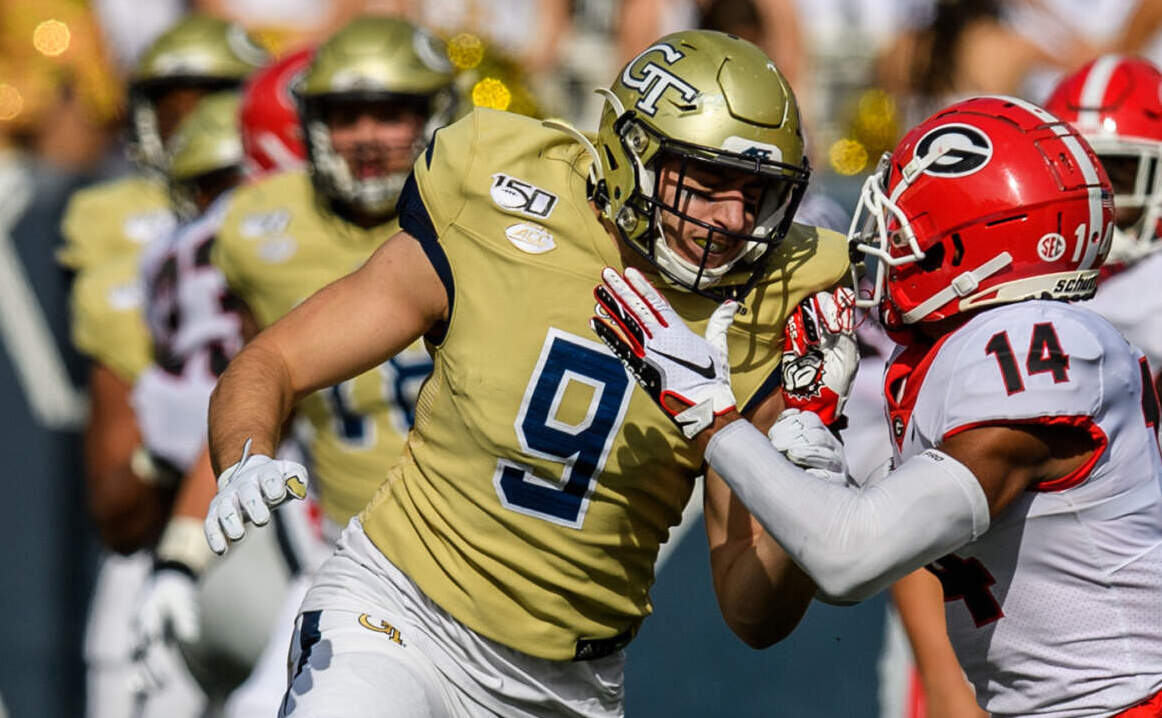 Davis didn’t complain about the Jackets’ loss to Georgia, and he made no excuses.

It was amazingly emotional. As he sat off to the side of a room in the Edge Center before his turn at the microphone, linebacker David Curry and defensive back Jaylon King spoke to media.

Collins re-entered the room sat beside Davis and hugged him yet again. The rangy young man has meant much to the Collins’ program in his one year.

And Tech means a lot to him.

His time is up, however. His eligibility is expired, and he’s going to leave a program atmosphere that he’s come in short order to adore. Tyler Davis clearly loves what’s going on at Georgia Tech.

“I tell people this all the time: I wish I could play college football forever. I mean, there’s just nothing quite like it. The alumni, the students, the bands, the fight songs, I mean I just get emotional thinking about it,” Davis said. “There’s nothing like college football.

“I wouldn’t trade my journey the last year for anything. I’m truly thankful I got to live out this dream here.”

To @Tyler_Davis9 and all our seniors, we thank you for everything you’ve done for Georgia Tech. The foundation you’ve built for the future will never be forgotten. #404theCULTURE pic.twitter.com/afdxlSBG65

Slightly, he teared up. Like a big man invested in something of value.

Collins and his staff have created an atmosphere that is hard to describe.

All new head coaches talk about creating culture. All of them.

No changes are as dramatic for public view as the Jackets’ move from the triple option offense to a NFL-style spread attack.

Yet what Collins and his staff have done behind the scenes – in recruiting, offseason workouts led by strength and conditioning coach Lewis Carralla and team-bonding maneuvers – is important. And Davis loved being part of it.

Asked what he felt about his 6-yard touchdown reception in the second quarter – his only score as a Yellow Jacket after he caught six touchdown passes last season for UConn – Davis deferred to those behind the scenes.

“Honestly, it wasn’t about me. I think the second that I caught it, I thought about everybody who helped me on the journey, to be honest with you, and I want to mention their names because I wouldn’t be able to be here right now without them,” Davis said. 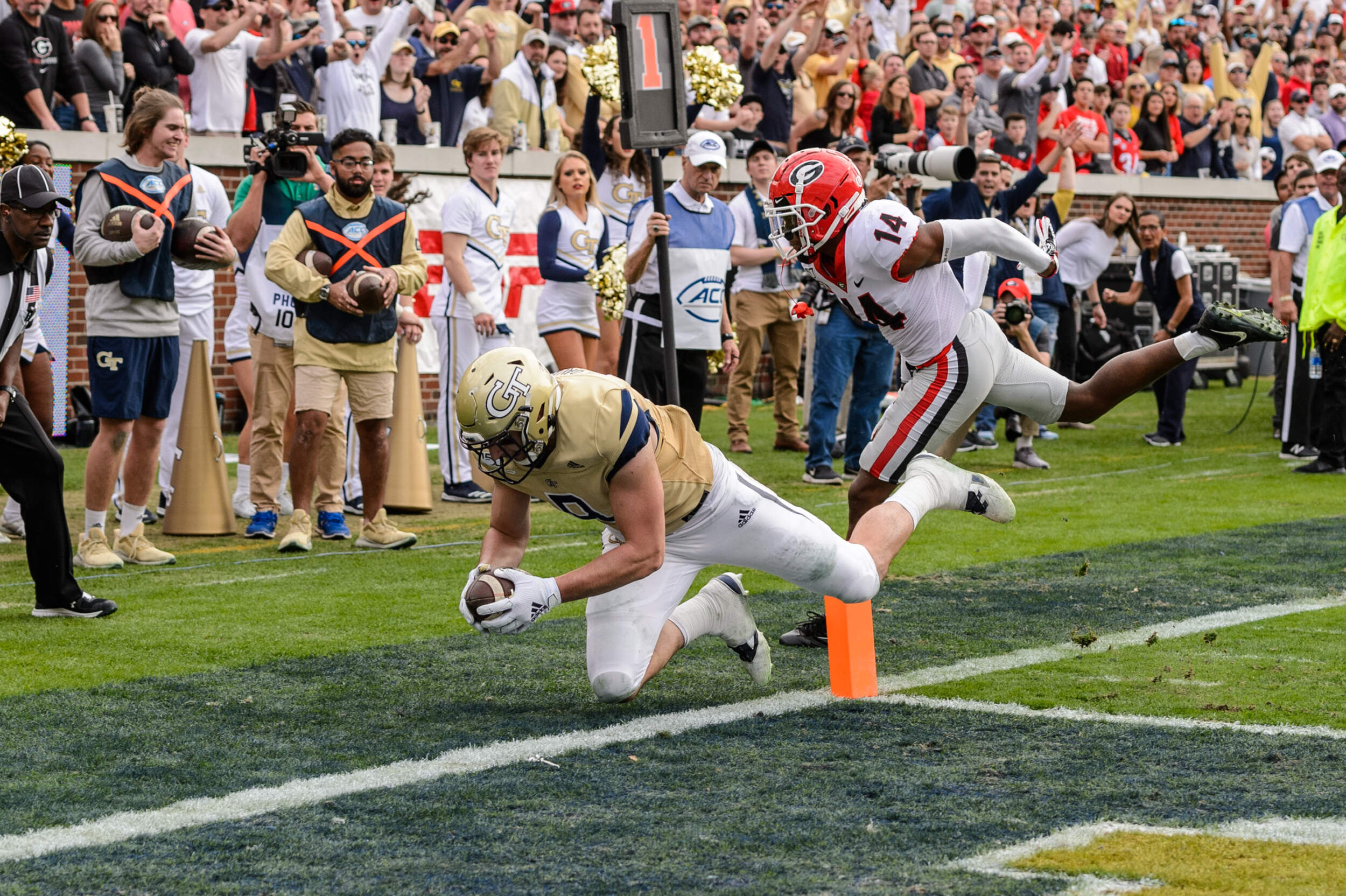 ""I wouldn’t trade my journey the last year for anything. I’m truly thankful I got to live out this dream here." - Tyler Davis"

Davis did more than take from coaches and support staff. He gave all that he could. His work ethic became infectious after he arrived in January, and his steady and serious approach prompted teammates to vote him a co-captain.

“I think it would just be give everything you have. I tried to do that from day one that I got here when I started realizing that the clock was winding down,” Davis said. “I think hopefully that I passed it on to the younger guys here. That’s the thing that I’ll probably follow the most, just how they develop and how they transform themselves into the college football players that they can be and just men in general . . .

“It will be cool to see how they develop in the next four years not only as college football players but people. I think they’ve come a long way, and I’m really proud to have been able to share my time with those guys.”

The Collins messages are sinking in at Georgia Tech, where the Yellow Jackets will return the bulk of the roster next season. They’re slated to lose just eight seniors.

The coach and his staff preach non-stop attack in everything that players might do, on the field and off. Collins relishes both fierce competition and camaraderie among teammates, even as those concepts might seem to some to work at odds with each other.

No wonder Davis had a hard time talking about the mood in the locker room after the Georgia game.

“I think it’s honestly something you can’t really describe. Being in college for five years and . . . you see what it means to the older guys and you really don’t know how to feel until you’re in the spot, ‘til it’s your time,” he said. “I really can’t describe what the feeling is.

“It’s just the last five years plays out in your mind how much you’ve worked every single early morning, every single last rep of a set, every practice . . . you know, I mean it all just comes together in one. It’s tough. Everybody after the game, all the young dudes coming up to you, hugging you, all the coaches . . . it just means the world that I had some kind of impact here.”

That was it. Just about.

Davis got up from the table, still in uniform nearly 90 minutes after the game, and as he walked away the tight end said to the assembled media room, “Appreciate you guys this year.”