THE FLATS – Georgia Tech athletics recognized the achievements of its student-athletes over the past year during its annual Yellow Jacket Celebration on Monday evening at the Georgia Tech Hotel and Conference Center.

One of the most decorated Yellow Jackets in Georgia Tech baseball history, Bart capped an outstanding career on The Flats by becoming the highest selection in the Major League Baseball Draft in Georgia Tech history when he was taken second overall by the San Francisco Giants. A consensus All-American and Johnny Bench Award winner, Bart was named the ACC Player of the Year and ACC Defensive Player of the Year last season after leading the ACC in hitting and posting a .992 fielding percentage.

Recording one of the most accomplished single seasons in Georgia Tech swimming history, Pumputis capped his 2018-19 season by earning ACC Co-Swimmer of the Year honors and becoming the first Yellow Jacket in school history to earn three All-American honors at the 2019 NCAA Championships. En route to being crowned twice an ACC Champion, Pumputis broke the school, pool, meet and conference record for the 200 breast, swimming the then-fastest time in the country. He then also competed internationally, representing his home country of Brazil where he finished with multiple top-15 times in the world. He also spent last summer setting the short course South American record in the 100 IM in order to qualify for the World Championships.

The full list of awards handed out at the Yellow Jacket Celebration include:

OUTSTANDING TEAM OF THE YEAR
Women’s Cross Country: Qualified for NCAA Championships for the first time in 16 years and ranked as high as No. 20 during the season
Men’s Swimming: Rose to highest ranking in program history at 17th in the nation

COMEBACK PLAYER OF THE YEAR
Women’s Track and Field’s Bria Matthews (ACC Champion in triple jump, finished fifth at NCAAs in triple jump to earn All-American after missing sophomore year and portion of junior year due to injury)

BRANDON ADAMS TEAMMATE AWARDS
The Brandon Adams Teammate Awards recognize student-athletes whose contributions to his or her program go far beyond the scope of athletics.

ACC POSTGRADUATE SCHOLARSHIPS
The ACC Weaver-James-Corrigan and Jim and Pat Thacker postgraduate scholarships are awarded to selected student-athletes who intend to pursue a graduate degree following completion of their undergraduate requirements. Each recipient will receive $5,000 toward his or her postgraduate education. Those honored have performed with distinction in both the classroom and their respective sport, while demonstrating exemplary conduct in the community.
Georgia Tech recipients: James Clark (golf), Amy Ruiz (women’s cross country/track and field), Jeanine Williams (women’s track and field) and Brad Stewart (football – honorary)

ACC SCHOLAR-ATHLETE OF THE YEAR
The ACC Scholar-Athlete of the Year award was established in September 2007 to be awarded annually to the top junior or senior student-athlete in their respective sports. Candidates for the award must have maintained a 3.0 GPA for their career as well as a 3.0 for each of the last two semesters.
Georgia Tech recipients: Malik Rivera (football) and Amy Ruiz (women’s cross country/track and field)

THOMAS LOZANO INSPIRATION AWARD
In its second year, the Thomas Lozano Inspiration Award is given in honor of Thomas Lozano, who was an inspiration to all Georgia Tech student-athletes through his passion, loyalty, support and work ethic. The award is given to one student-athlete who exemplifies the qualities best displayed by Thomas.
Recipient: Sara Gilbert (women’s swimming)

BOBBY DODD SCHOLARSHIP
The Bobby Dodd Scholarship is given to one male and one female returning student-athlete with a 3.0 GPA or higher. Each recipient must have lettered in his or her sport at least one year and they must both exemplify good citizenship and participation in community service, outstanding sportsmanship and dedication.
Recipients: Tyler Strafaci (golf) and Emily Ilgenfritz (women’s swimming)

GT LEADERSHIP AWARD
Given to student-athletes that demonstrate leadership qualities on the playing field, in the classroom, and in the community.
Recipient: Brad Stewart (football) and Martine Fortune (women’s basketball)

ATHLETE OF THE YEAR
Given to applaud the athletic accolades of some of the nation’s best student-athletes.
Recipients: Joey Bart (baseball), Caio Pumputis (men’s swimming) and Bria Matthews (women’s track and field)

TOTAL PERSON AWARD
Given to one male and one female student-athlete who are graduating or within 20 hours of graduating. Recipients have to be in good academic standing; lettered at least two years; achieved ACC, regional or national recognition or awards; made significant contributions to his or her team; and possess the attributes of the Total Person (career ambitions, family relations, health consciousness, self-motivation and community involvement).
Recipients: James Clark (golf) and Jeanine Williams (women’s track and field) 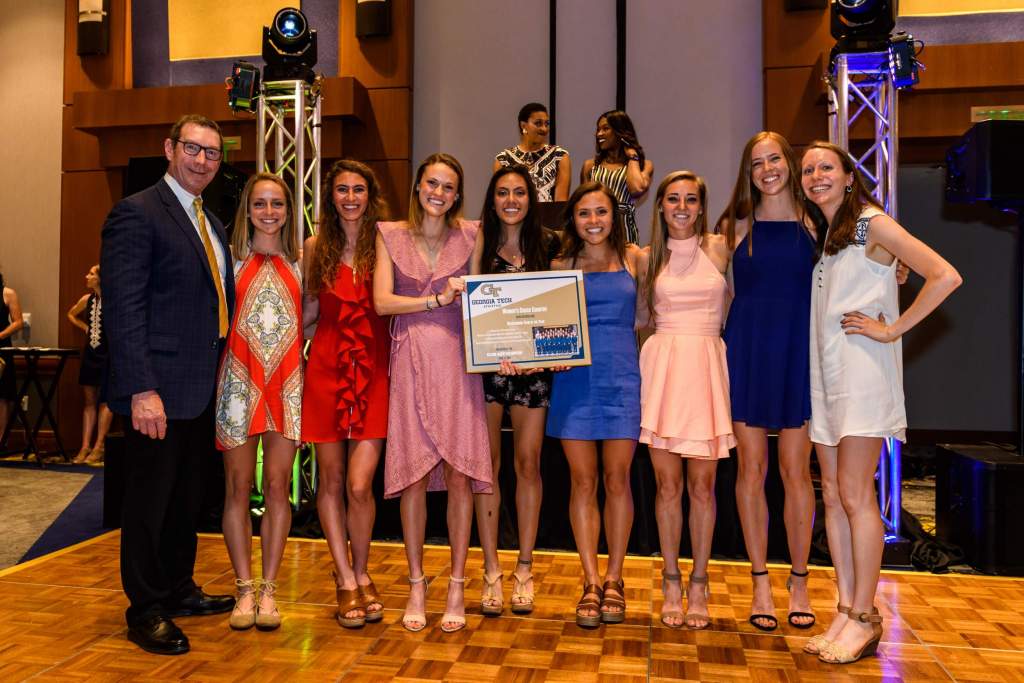 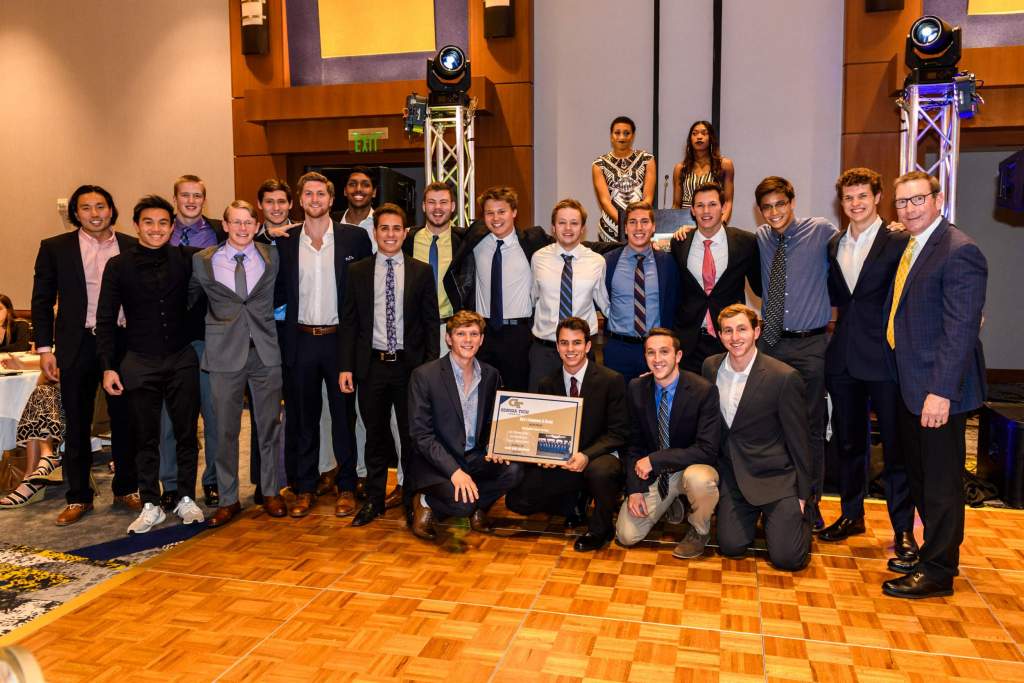 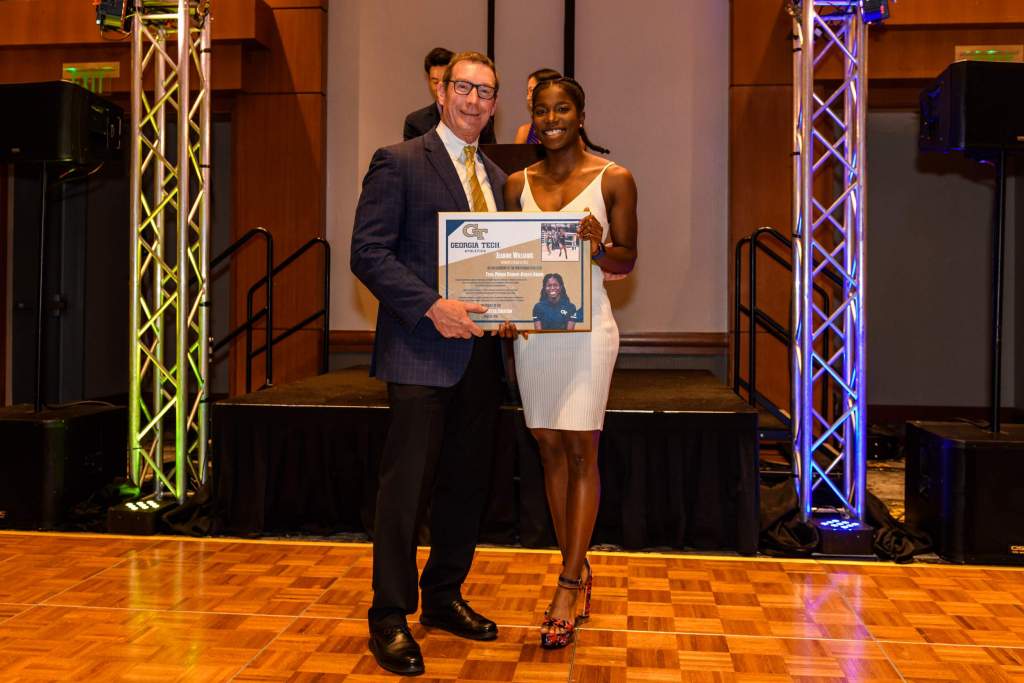 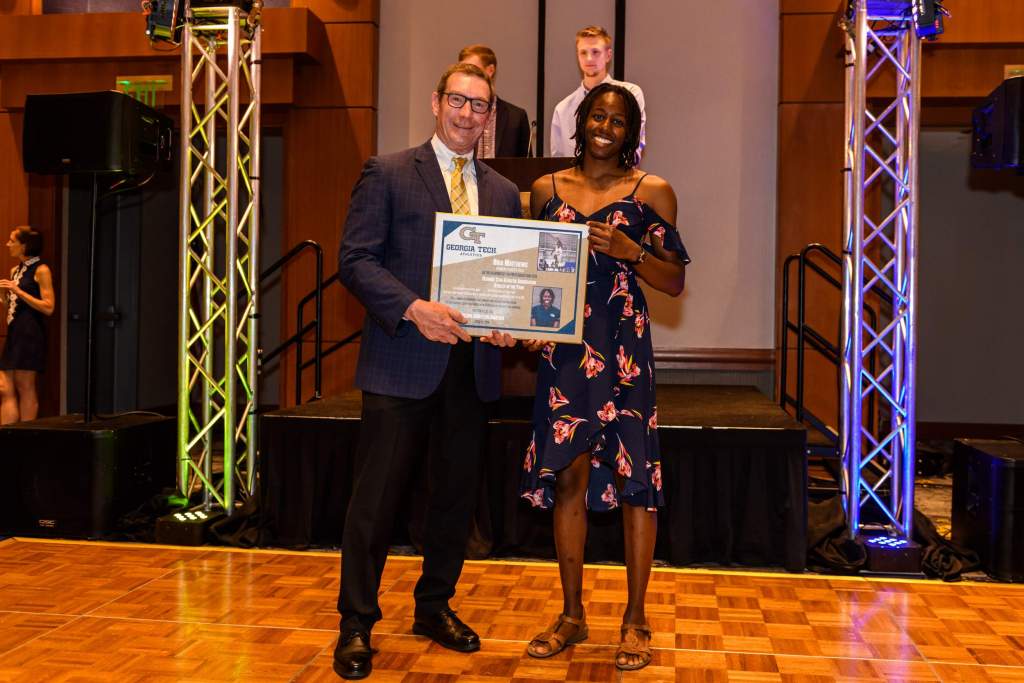 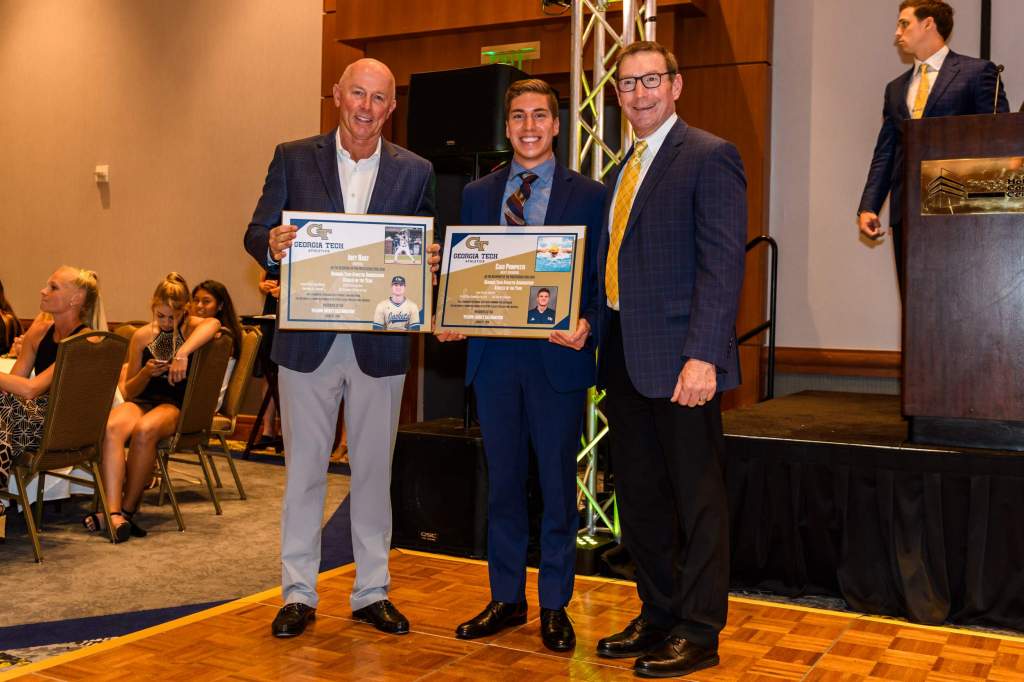 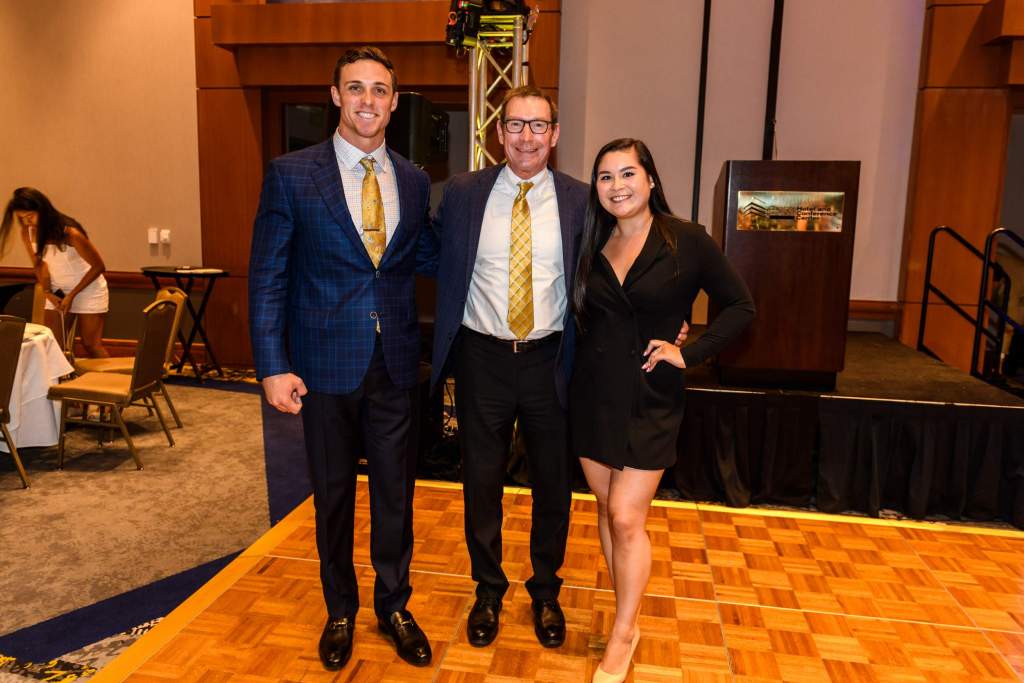 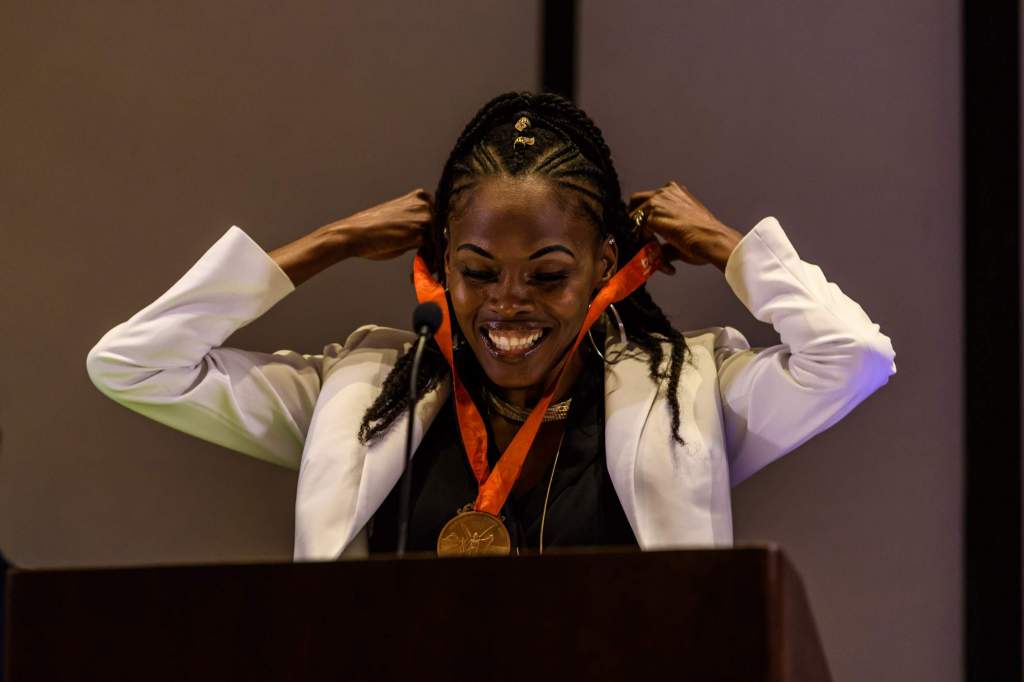 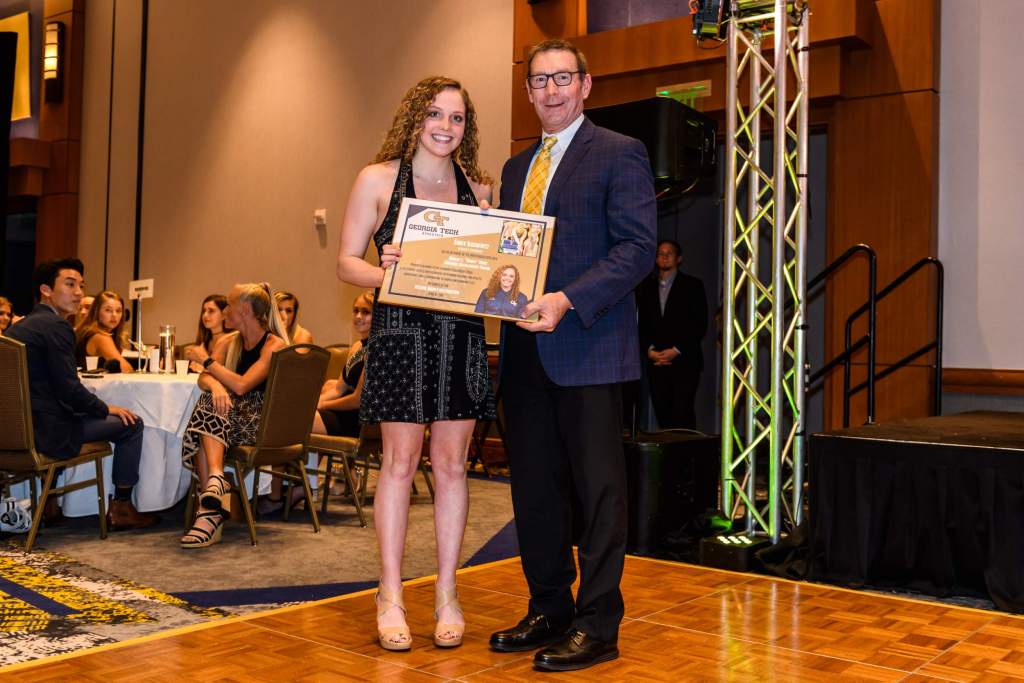 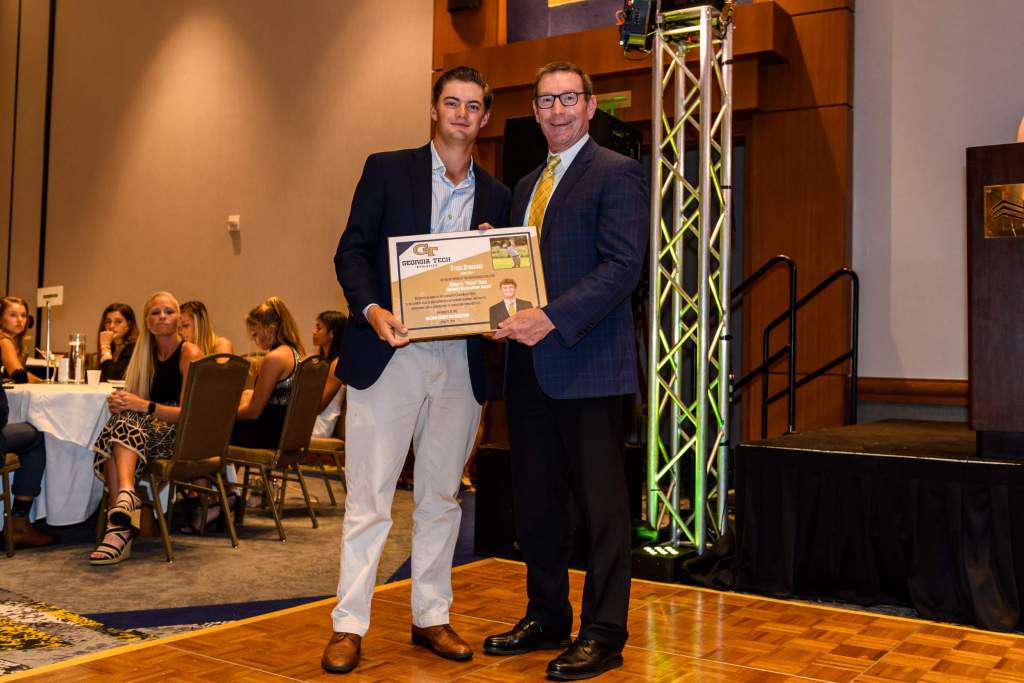 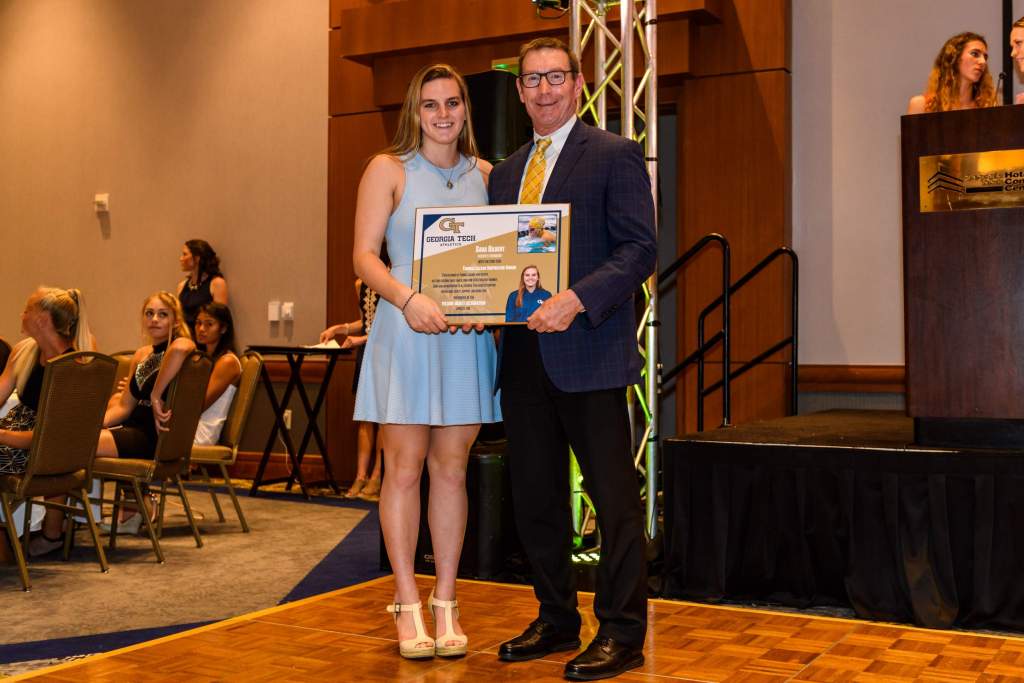 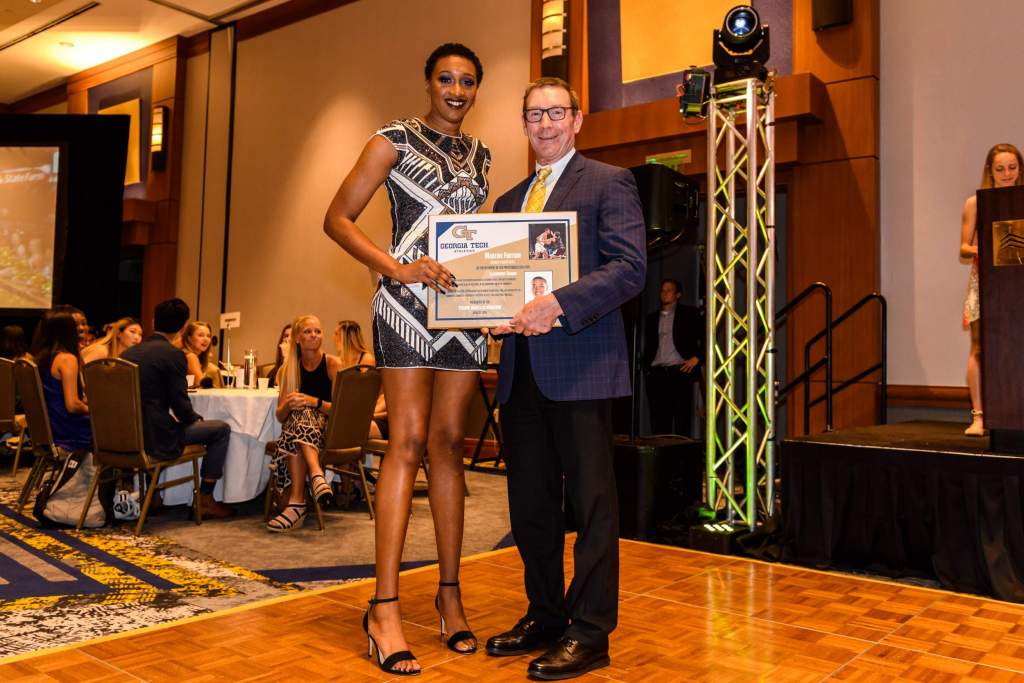 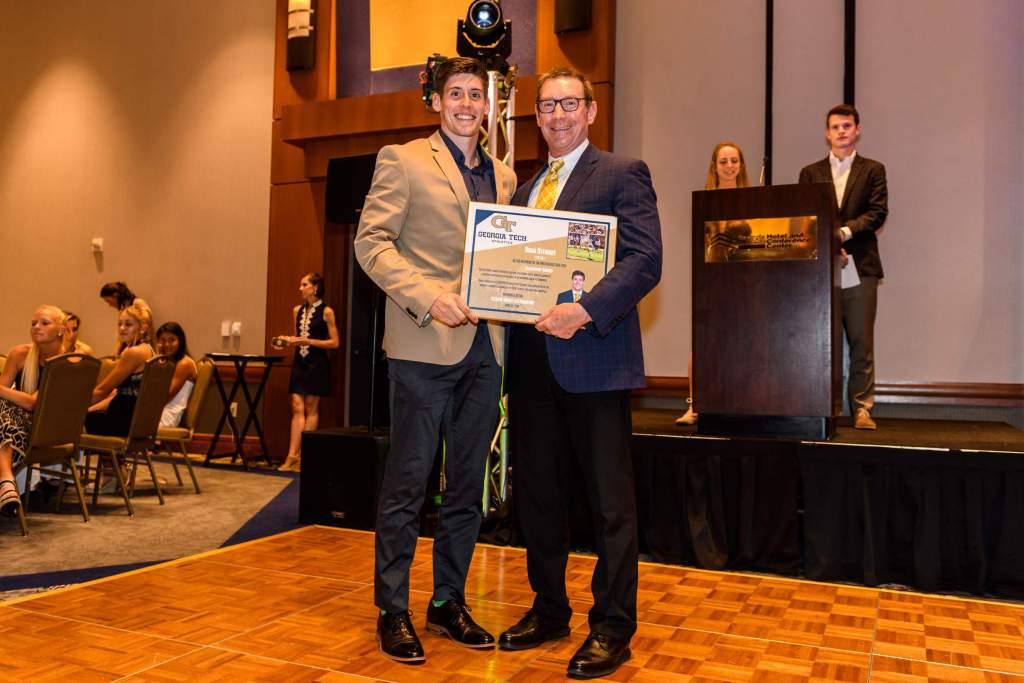 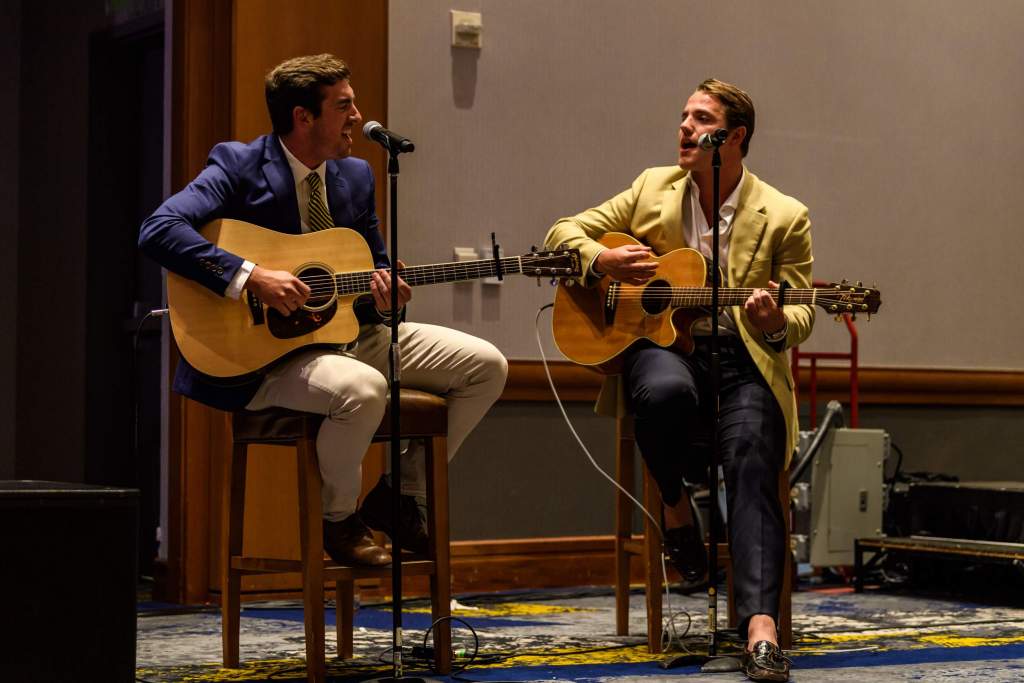 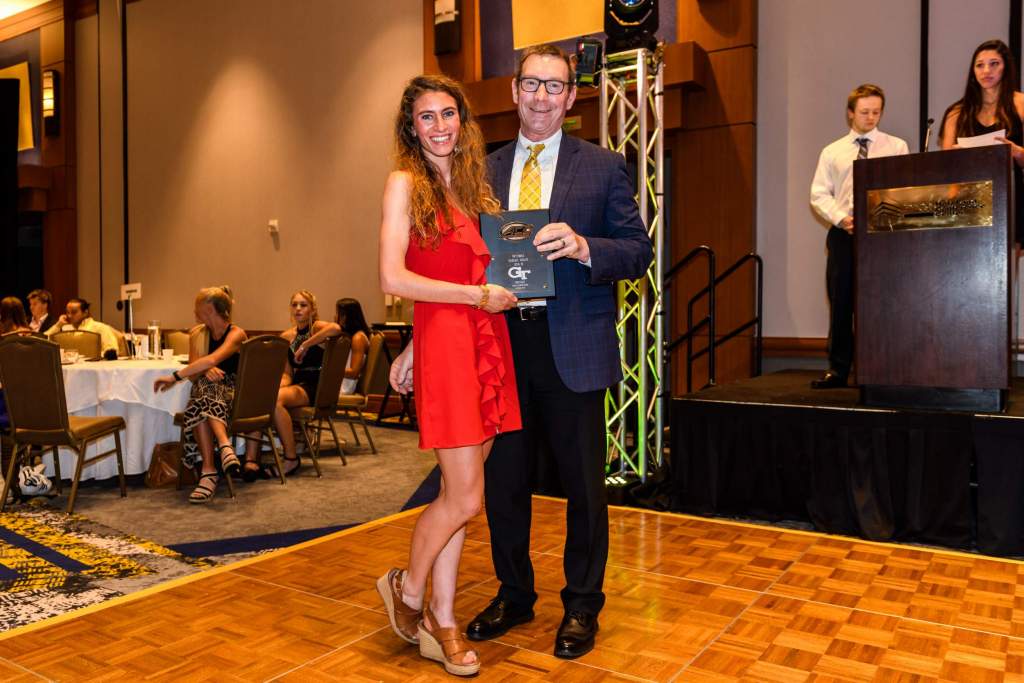 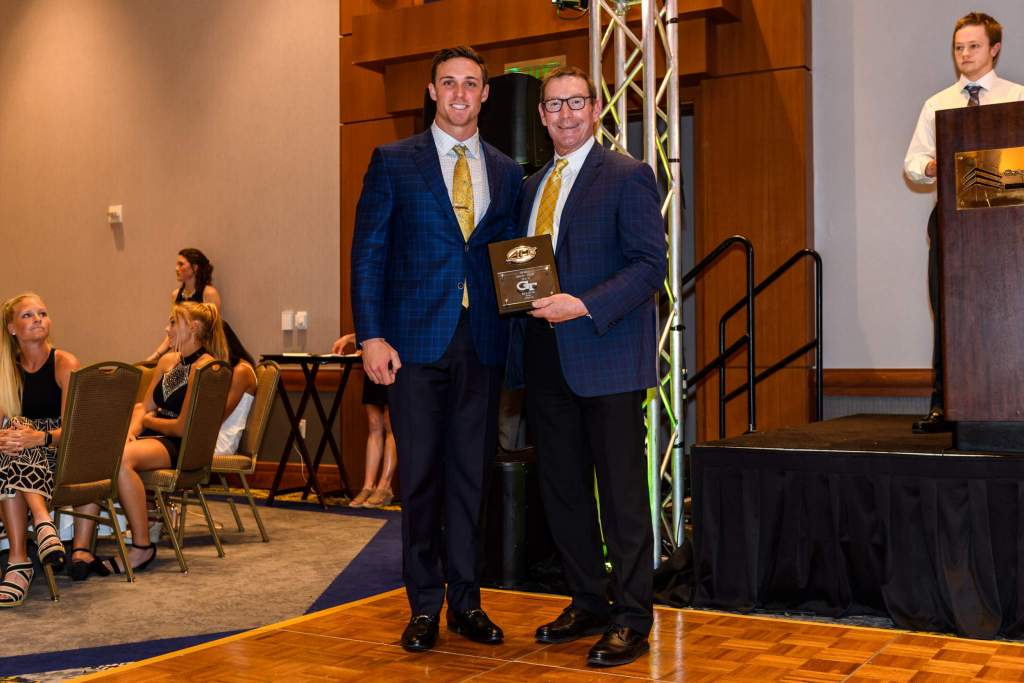 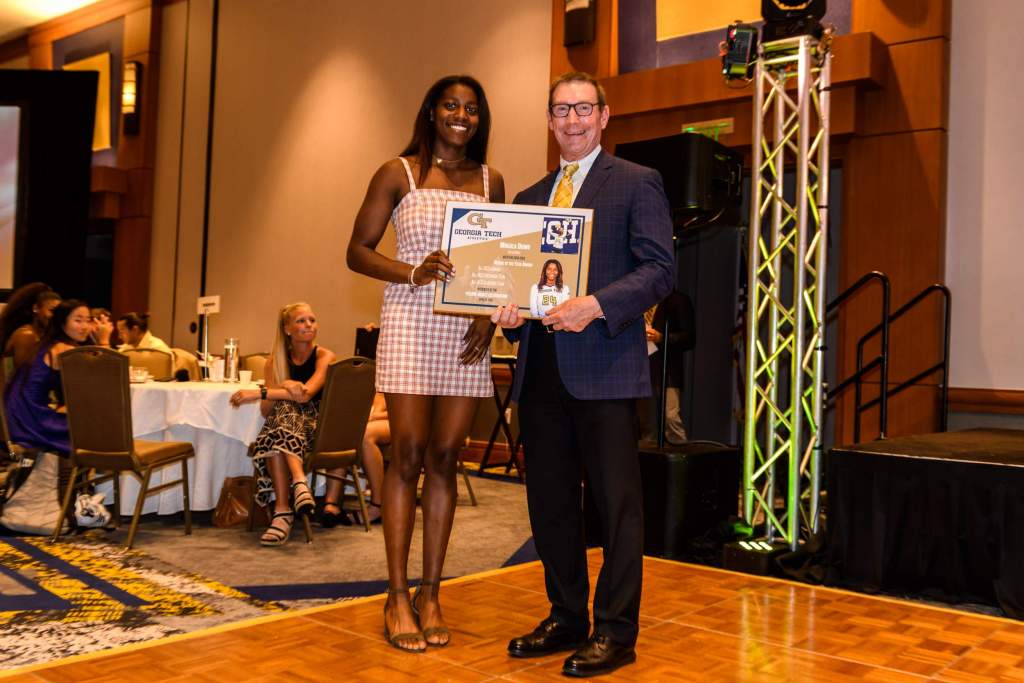 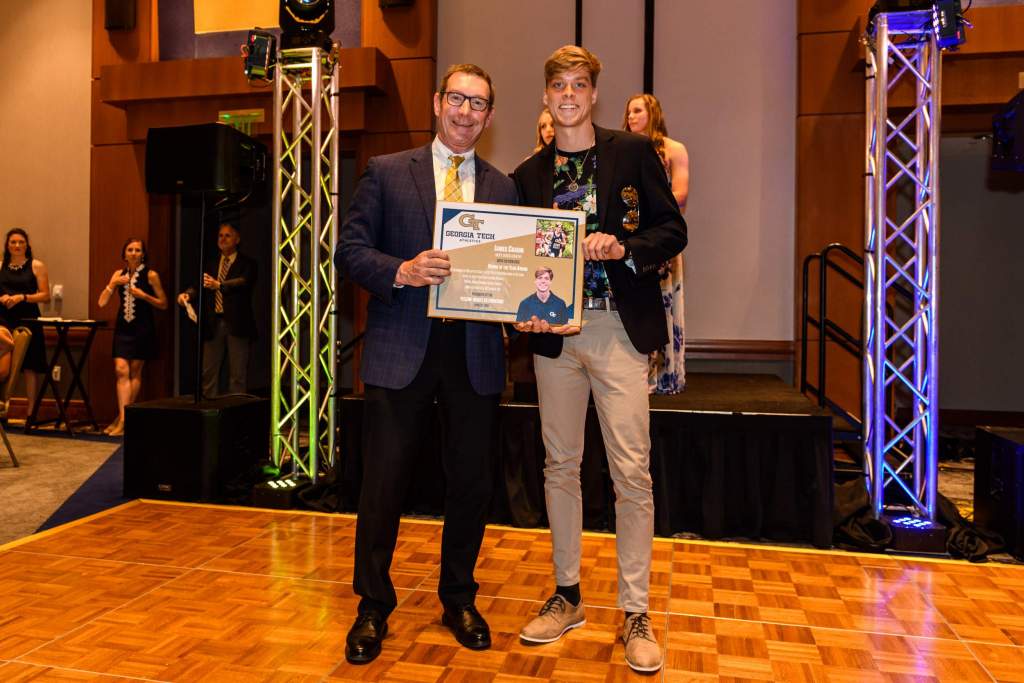 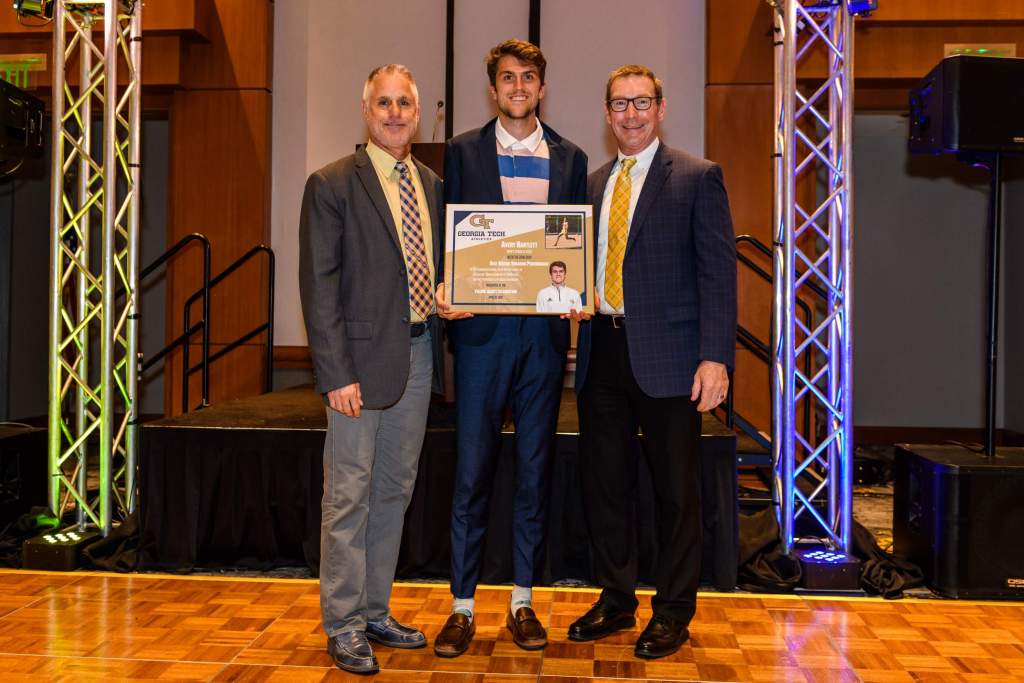 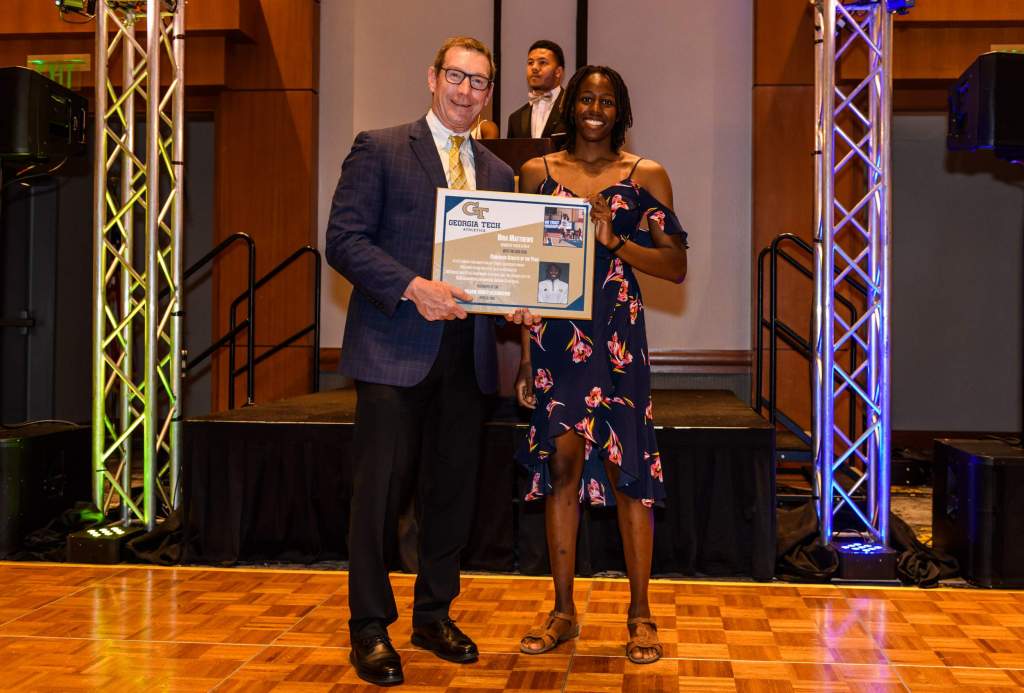 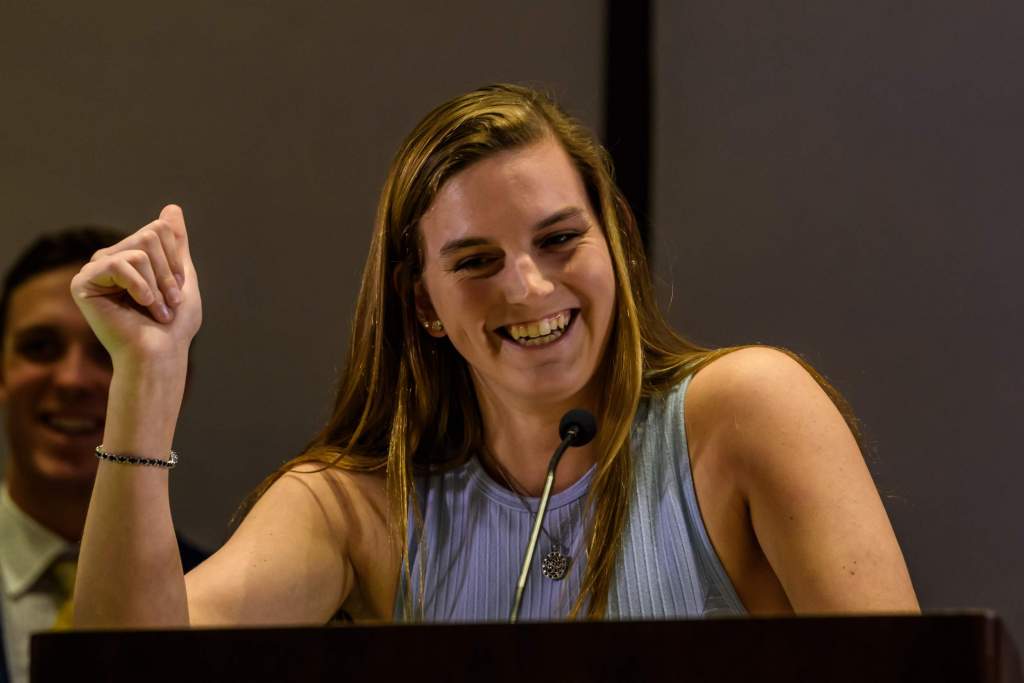 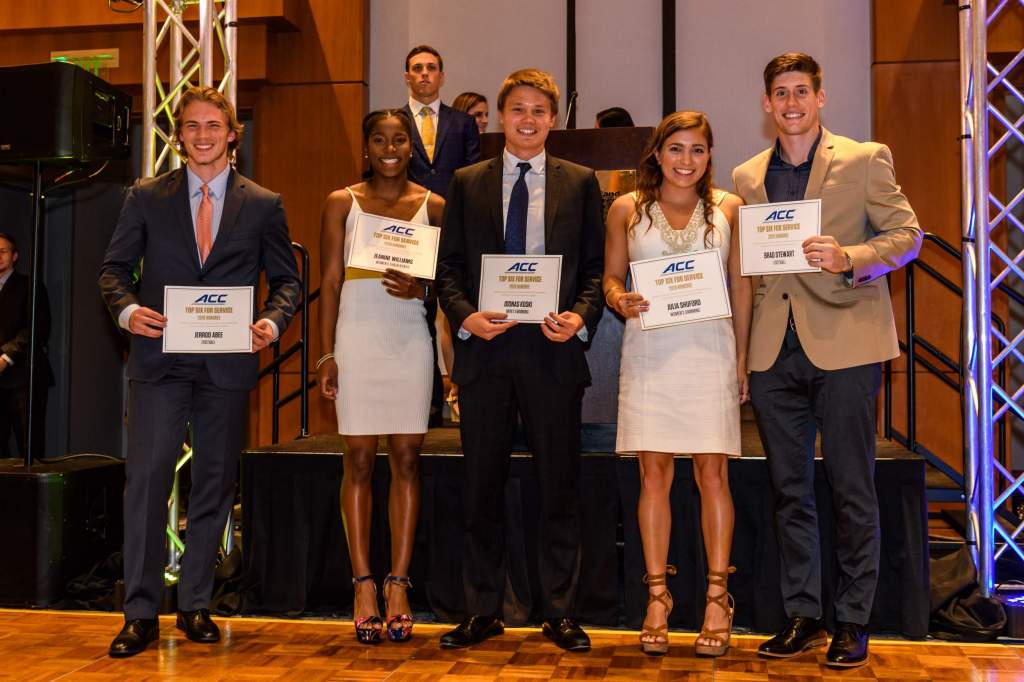 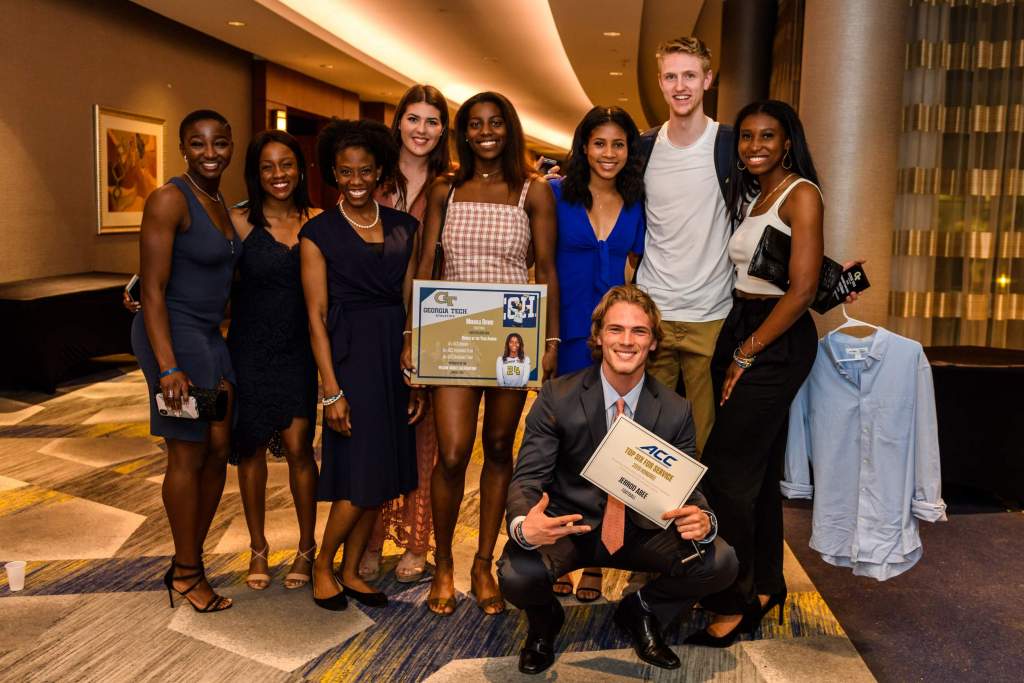 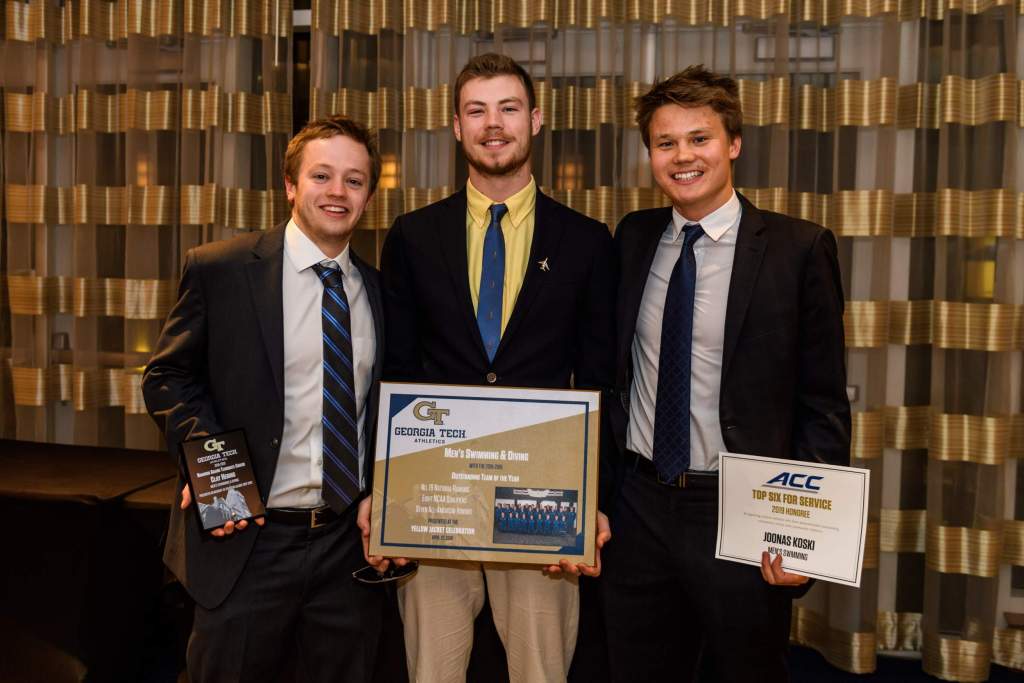 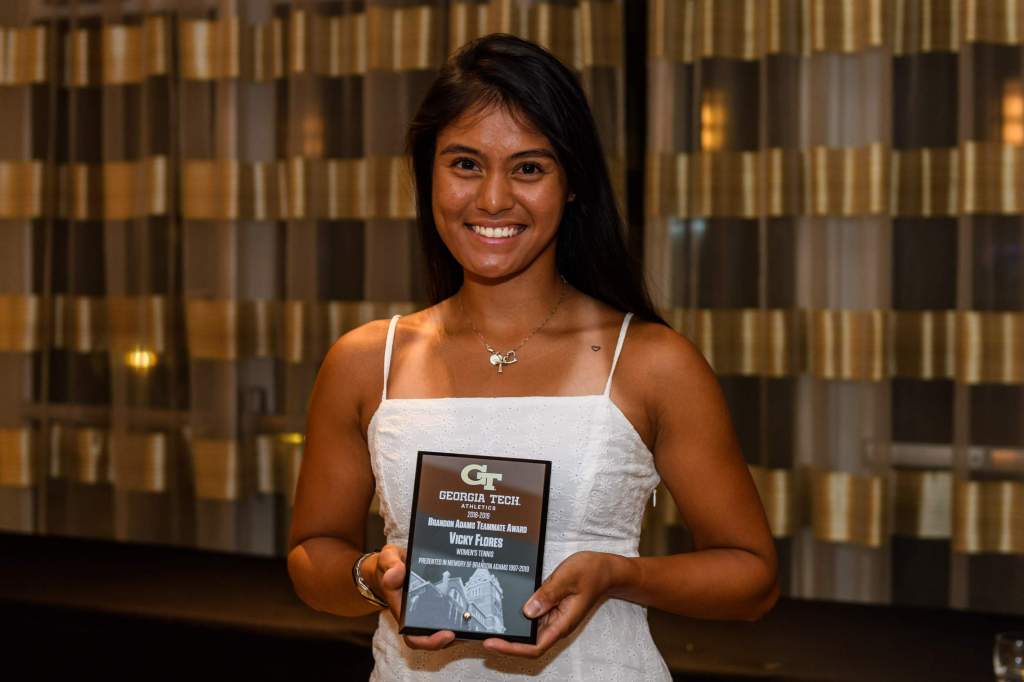 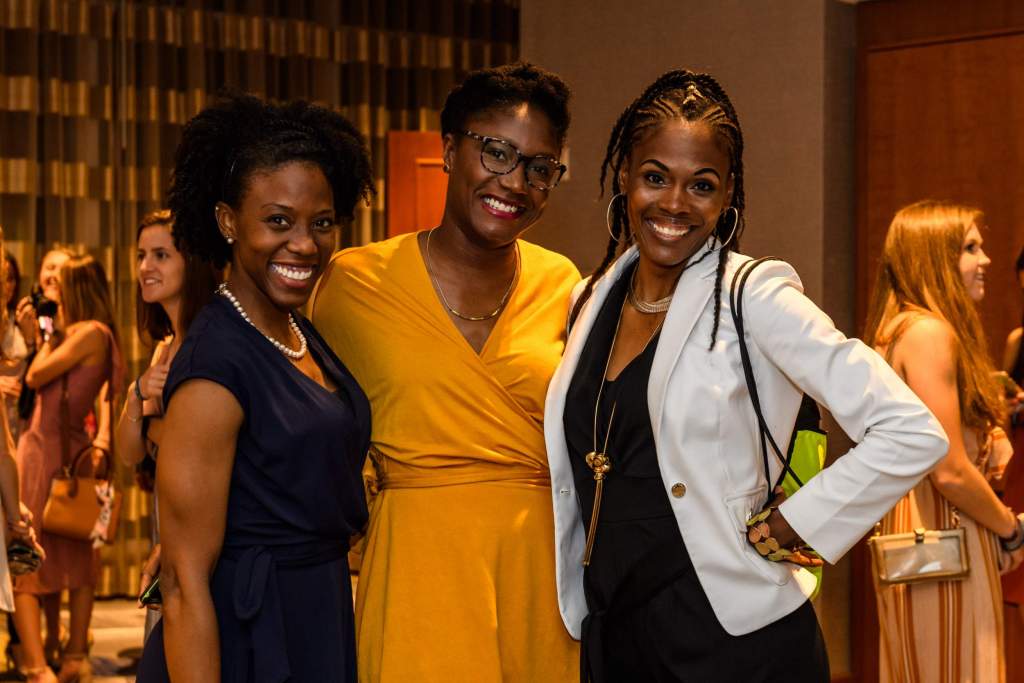 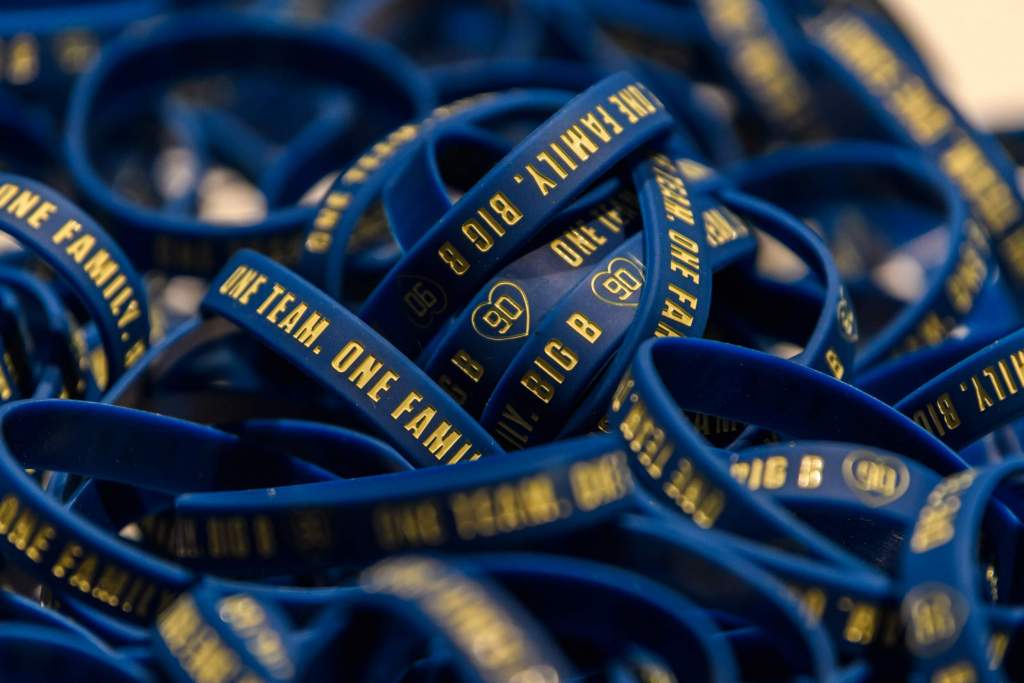