THE FLATS – Seven home games, including a season-ending three-game homestand versus Virginia Tech, NC State and archrival Georgia, highlight Georgia Tech football’s 2019 schedule, which was announced by the Atlantic Coast Conference on Wednesday.

With the completion of the slate, Georgia Tech athletics has also announced prices for 2019 season tickets. Starting at just $219 for the Yellow Jackets’ seven-game home schedule (and just $300 for sideline seats – which is the lowest pricing since 2014), 2019 season tickets go on sale on Monday, Jan. 28. 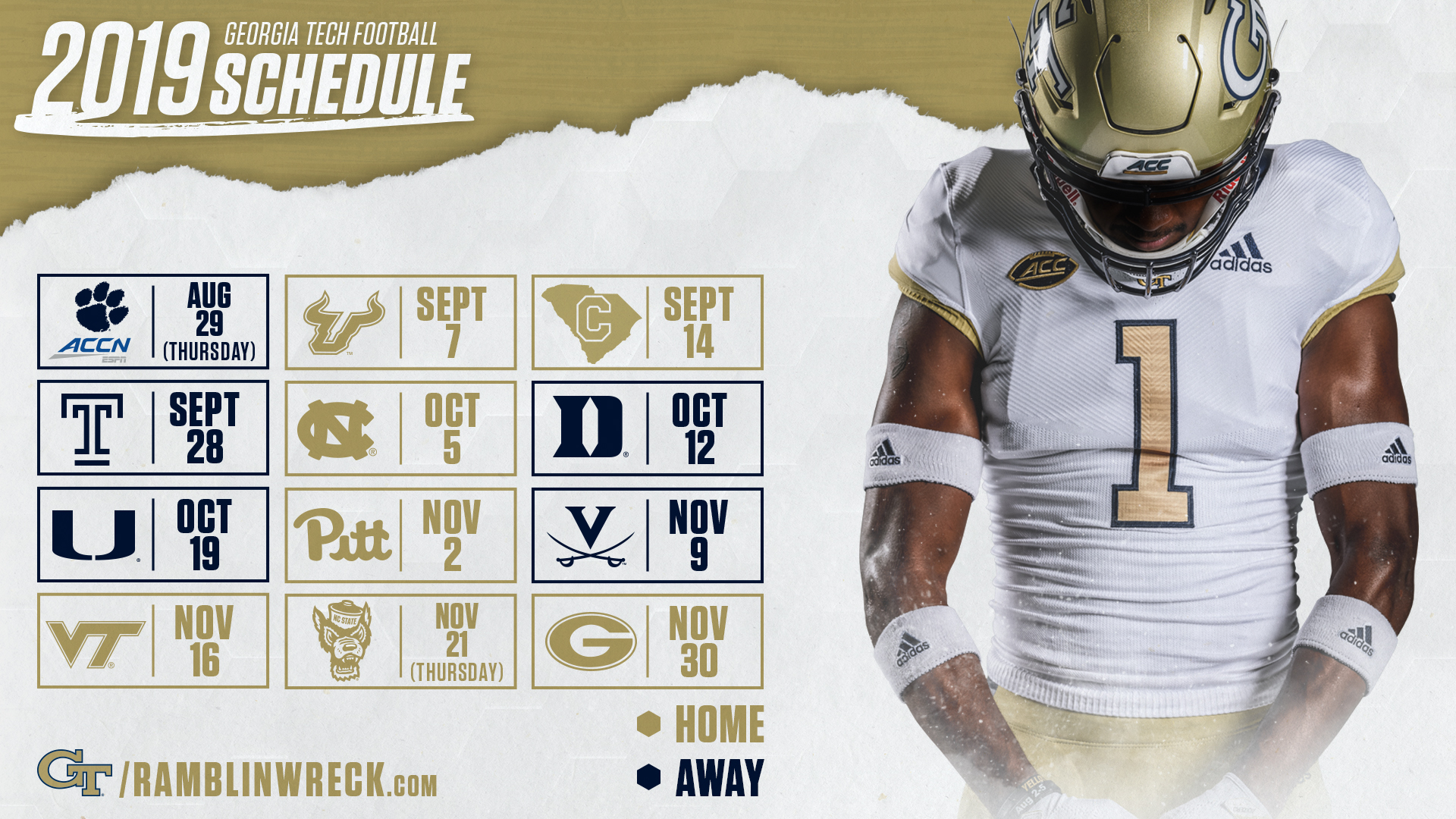 The season opener at Clemson, which will be the first football game ever televised live on the ACC Network, will also mark only the third time in the last 23 years that the Yellow Jackets will open the season against a conference opponent. Georgia Tech’s Sept. 28 trip to Philadelphia to play Temple is notable not only because it is the first-ever matchup between the Jackets and Owls but also because it will serve as a homecoming for Tech head coach Geoff Collins, who was at the helm at Temple for the past two seasons.

Due to there being 14 Saturdays between Labor Day weekend and Thanksgiving weekend in 2019, the Yellow Jackets will enjoy two off weeks this season – Sept. 21 and Oct. 26.

Lower prices across the board await Georgia Tech season-ticket holders for head coach Geoff Collins’ first campaign at the helm of the Yellow Jackets, as the cost of season-ticket memberships have decreased for all seat locations at Bobby Dodd Stadium in 2019, despite the fact that the Yellow Jackets are playing one more home contest than they did last season. Highlights include:

* A contribution to the TECH Fund is required to purchase tickets in selected seating areas. Click HERE for TECH Fund seating chart.

Season tickets go on sale on Monday, Jan. 28 at 9 a.m. New fans that wish to secure 2019 tickets in advance can do so by putting down a $100 deposit. To make a deposit on 2019 Georgia Tech football season-ticket memberships, click HERE or call the Georgia Tech athletics ticket office at 888-TECH-TIX. Season-ticket renewal information will be emailed to 2018 members on Jan. 28 as well. Returning members do not need to place a deposit in advance, as their seats are being held.