#TGW (+VIDEO): A Little Help From His Friends

The juice returned to Georgia Tech, and the biggest came Wednesday night when the Yellow Jackets’ smallest player flexed as if Hulk Hogan.

Jose Alvarado had it going on against Pittsburgh while dropping a career-high 29 points on the Panthers to help Tech snap a seven-game losing streak.

He made six straight free throws in the final minute of a 73-65 win, but better than that, the 6-foot guard somehow – with the shot clock fast approaching :00 late – wove the right side of the lane and worked the ball up among multiple defenders. Off the glass it went, and through the hoop it fell for a 64-59 lead with 2:18 left in the game.

As he turned up the court, “Juice” busted out the wrestler’s pose and screamed … something. A modest yet energized crowd in McCamish Pavilion kept cheering as midnight approached.

“That was my little swag, I guess. Pulled out the muscles,” Alvarado said with a grin. “It was a tough layup, and I’m glad I made it.”

Jose made a lot of shots.

In hitting 9-of-13, including 2-of-5 from three-point range, and 9-of-10 free throws, he tied his career high for field goals made, set a new mark for free throws, and added six rebounds, five assists and committed one turnover while playing every second of the game.

Alvarado added two steals and tied a career high with a blocked shot, adding one on a night when the Jackets swatted 12. That was fourth-most in Tech history in an ACC game.

He obviously had help on a night when the Jackets made half their 48 shots, including 7-of-19 3-pointers.

Good thing the Jackets were jacked up. Pitt brought a nine-game losing streak, and the young Panthers played as if on fire, sometimes to their detriment (see shots blocked and 10-of-33 shooting in the paint).

Tech, though, had quite a bit to do with the visitors’ frenzied work.

“Curt was good today, and we need him to hit some big shots. He’s obviously been in a little bit of a slump,” said head coach Josh Pastner. “I thought his energy was good. It wasn’t that he missed it and he sulked or pouted about it, or let it bother him. If he missed a shot, he moved on to the next play and you could just tell he had better energy today.” 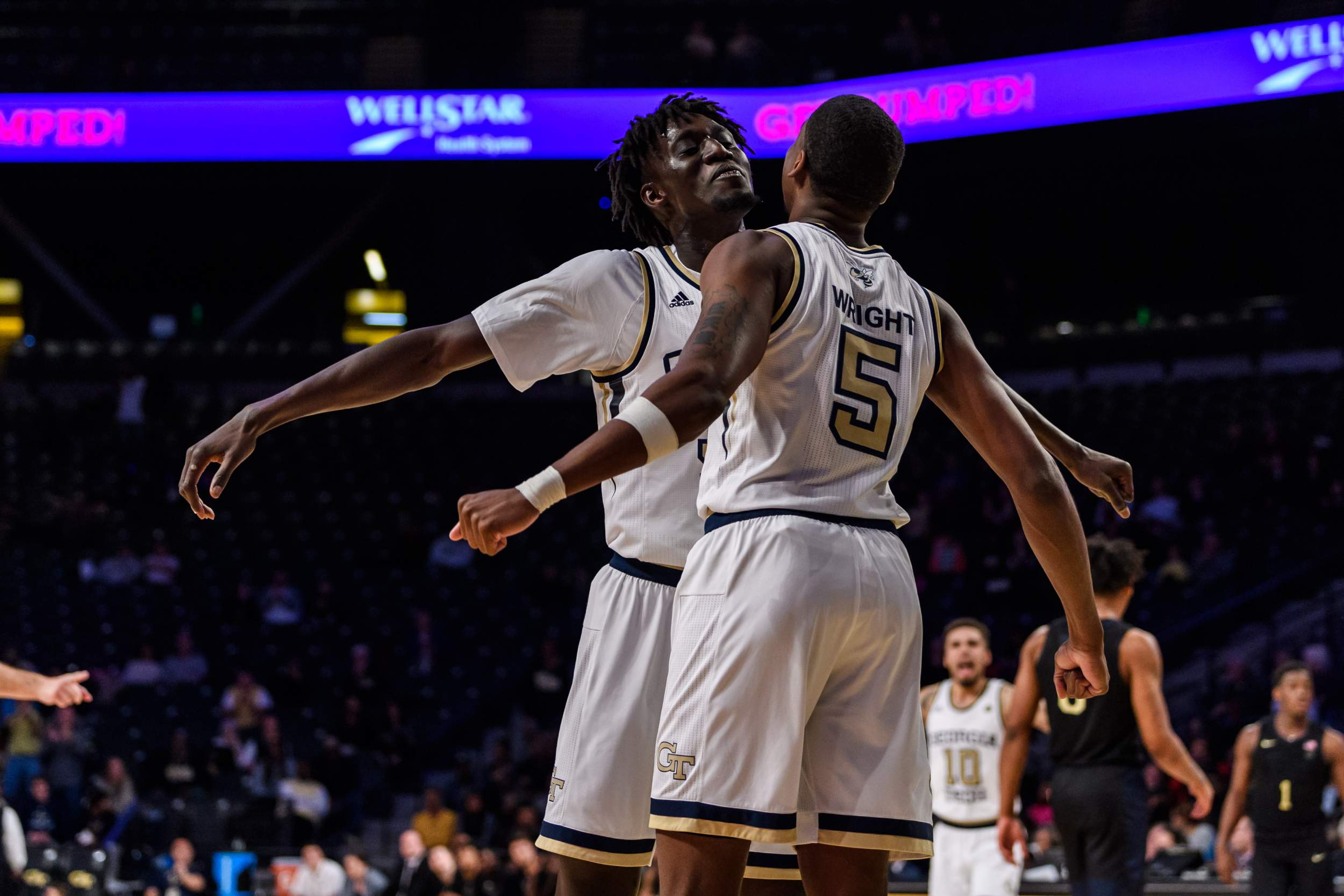 It wasn’t a surprise that Pitt had a lot of shots blocked. That happens to a team that attacks the rim the way the Panthers go at it. That’s why they entered the game leading the ACC in free throws taken – an average of 24.5 per game.

“They are a downhill, driving team, and we talked about that we’ve got to defend without fouling,” explained head coach Josh Pastner.

They missed 18, which didn’t help them as the Jackets limited Pitt to 33.3 shooting from the field. Pitt also grabbed a whopping 17 offensive rebounds, yet scored a modest 13 second-chance points.

Why? Partly because Tech kept blocking shots, including Wright. The sophomore never before swatted more than one in a game, yet Wednesday he got four while securing seven rebounds.

Sure, Moses struggled around the rim and on a couple jumpers. He made just 2-of-9 shots.

But Alvarado said he wasn’t surprised to see Wright helping out all over the place, nor with 1:41 left when he connected on two free throws. The Jackets scored their last nine points at the line, in fact, after Jose’s muscle-up bucket, and Wright started the closing run.

“That’s Moses. You should see him at practice. That’s the whole him the whole practice,” Alvarado said. “If his energy is up there, he can be real good as he showed today. It’s not about scoring, it’s about what he’s doing on the defensive end and blocking really clutch shots at the end, and he made good free throws.”

In the grand scheme, Jose was the guy who kept jumping off the top ropes upon Pitt. He’s the one who even played referee when he stepped between his coach and an official with 2:01 left in the game after Banks fouled out on what looked like a clean block on Pitt’s Terrell Brown.

Alvarado was the one with hands raised at the end, jacking up the crowd, after making his last six free throws under duress. There was a lot to be happy about and little to lament. He never left the game, handled the ball more than anyone else and outscored everybody.

The mysterious six-game skid, in which he averaged 4.0 points on bad shooting, appears officially over. In his past two contests, he’s averaged 23.0 points on 62.5 percent, including 5-of-12 3-pointers with 11 rebounds and eight assists, four steals and two turnovers in 78 minutes.

“Jose Alvarado, besides his missed free throw, was pretty much perfect, you know, if you look at his box score,” Pastner said. “God bless him. He played 40 minutes today and he played his tail off.”