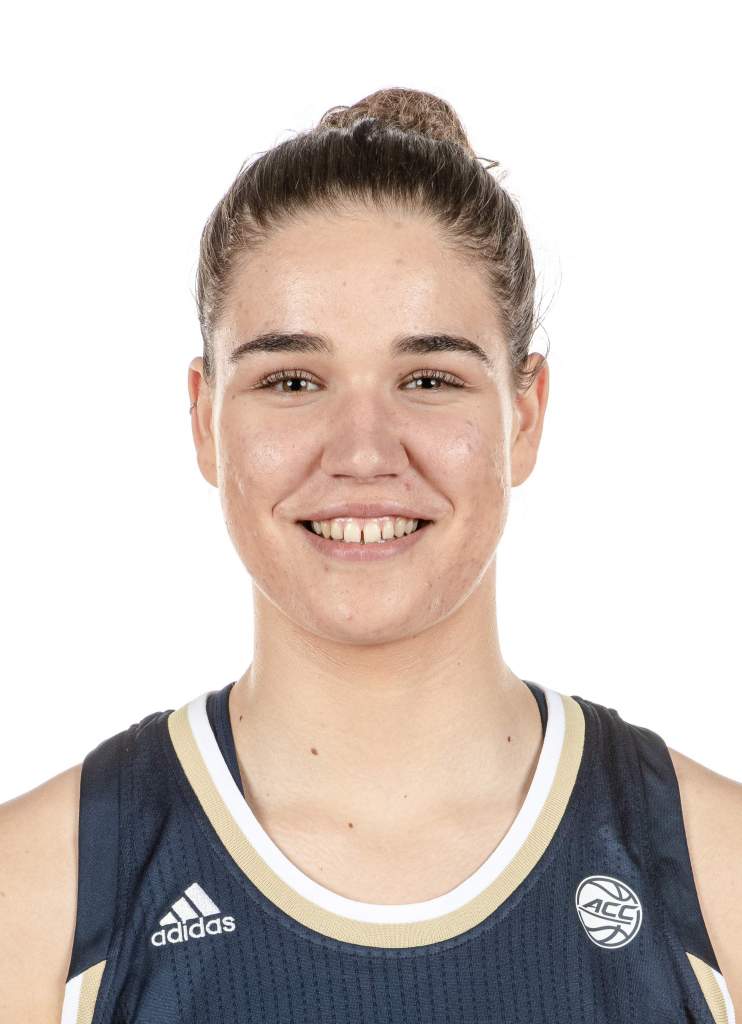 2019-20 (Freshman): Took the floor in all 31 games as a freshman and earned the start in 15…Finished the season averaging 6.5 points and 4.1 rebounds per game…Fourth on the team in rebounding…Recorded nine games scoring in double-figures…Made her collegiate debut against Houston (11/5), finishing with four points and three rebounds…Had a strong performance against Grambling State (11/10), notching her first double-figure game with 15 points, going 5-for-6 from both the field and free throw line…Blocked three shots in Tech’s win at Georgia (11/17), marking the first program win in history in Athens…Pulled down season-best nine rebounds in win over Georgia State (11/20), while also dishing out season-high four assists…Added 12 points in win over Seton Hall in Junkanoo Jam (11/28), going 6-for-9 from the field…Led team against Rutgers (11/30) offensively with 13 points in Junkanoo Jam championship game…Scored game-high 14 points in win over Wisconsin (12/5), connecting on 7-for-10 from the field to set season-bests…Finished with nine points, on 4-of-5 shooting, three rebounds and an assist at Wake Forest (1/5)…Came off the bench at Syracuse (1/16) to post eight points, two steals, two blocks and one rebound…Blocked a career-high four shots against North Carolina (1/23) and finished with five points and four rebounds…Finished with eight points and eight rebounds at Miami (1/30) in 37 minutes…Dropped season-high 16 points in win at Pittsburgh (2/6) and finished with seven rebounds, two steals, two blocks and an assist…Contributed 12 points in Tech’s win at No. 4 NC State (2/16) and finished with six rebounds, three blocks, an assist and a steal…Went 6-for-6 from the field against the Wolfpack…Led Tech with 11 points against No. 5 Louisville (2/20)…Added 10 points in Tech’s win over No. 17/18 Florida State (2/23)…Dropped 14 points in win over Pitt (3/5) in the second round of the ACC Tournament and pulled down eight rebounds.

PREP: Member of Spain’s National Team…First participated with the National Team with the U14 team, playing in the BAM International Tournament in Slovenia…Earned MVP in round seven for her 27-point, seven-rebound performance against Barça-CBS… Competed in U16 European Championship when Spain finished fifth…Averaged 4.8 points and 3.0 rebounds per game during the tournament…Played with U17 Spanish National Team in World Cup in Belarus…Averaged 10.1 points, 8.7 rebounds and 1.0 blocks per game as Spain finished fifth…Ranked No. 5 international recruit by Prospects Nation, No.6 by Go Global and No. 15 international ranking by Collegiate Girls Basketball Report when she signed with Georgia Tech.

PERSONAL: Chose Georgia Tech because of the academics, level of competition in women’s basketball and location…Started playing basketball at age 12…Lists most memorable athletic accomplishment as finishing third in the world with the National Team of Spain…Participated in a Basketball Without Borders trip to New Orleans in 2017.