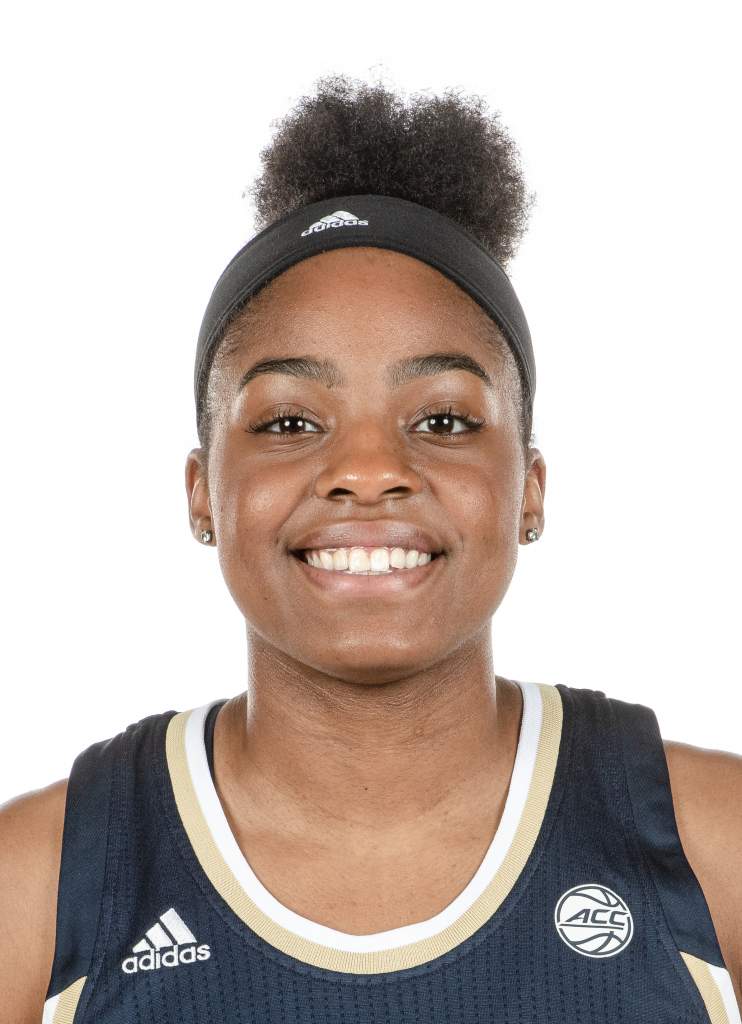 2019-20 (Junior): Started all 31 games…Averaged 10.2 points, 6.2 rebounds, 3.1 assists and 1.3 steals per game…Led team in assists (95) and was second in rebounding…Finished second on the team in scoring…Recorded her first game in double-figures against Grambling State (11/10), chipping in 13 points, while dishing out seven assists to match her career-high…Second on the team in scoring at Georgia (11/17), pitching in 16 points on seven field goals, including her first-ever three-pointer as Tech defeated Georgia in Athens for the first time in program history…Finished with eight points, five rebounds, five assists, a block and a steal in win over Wisconsin (12/5)…Pulled down nine rebounds in win at Kennesaw State (12/8)…Chipped in 11 points against No. 11/12 Texas A&M (12/20) in Coqui Classic, going 5-for-8 from the field and hitting Tech’s only free throw…Recorded first double-double of the season in win over Rice (12/21) with 15 points and a team-high 13 rebounds…Hit the game-winning shot against Rice with 1.9 seconds left…Posted 11 points, eight rebounds, a block and an assist in ACC opening win over Virginia (12/29)…Nearly missed a double-double against No. 23 Miami (1/2) with 10 rebounds and eight points…Was perfect 8-for-8 at the free throw line at Wake Forest (1/5) to finish with 12 points in the game, while dishing out four assists and two steals…Added 13 points in Tech’s win at Syracuse (1/16) and finished with three steals and a 5-for-5 effort at the free throw line…Dropped a season-high 19 points against North Carolina (1/23), including hitting her second career three-pointer that tied the game with 11 seconds left and forced overtime…Finished with seven rebounds, two steals and an assist against the Tar Heels…Added 10 points at Duke (1/26) playing the full 40 minutes… Played 44 minutes at Miami (1/30) and finished with 10 points, eight rebounds, three assists and two blocks…Finished with eight points, seven rebounds, five assists and three steals against Notre Dame (2/2)… Pitched in 10 points, five rebounds, four assists and two steals at Pittsburgh (2/6)…Dropped double-double at Virginia Tech (2/13) with 17 points and 13 rebounds to match her season-high on the boards…Scored 14 points against No. 17/18 Florida State (2/23) while recording five rebounds and three assists as Tech completed the season sweep over the Seminoles…Contributed 11 points in final regular season game at Clemson (3/1)…Dropped 15 points against No. 10 NC State (3/6) in ACC Tournament quarterfinals…Pulled down nine rebounds against the Wolfpack and recorded three assists and two steals.

2018-19 (Sophomore): Led the Jackets at Houston (11/9) with 25 points on 10-of-14 shooting and collected seven rebounds…Nearly missed a double-double against App State (11/11) finishing with 10 points and eight rebounds…Helped Tech upset No. 14 Georgia (11/18) with 10 points and five rebounds, while swiping four steals…Led Tech offensively at No. 7 Maryland (11/29) with 14 points in the ACC/Big Ten Challenge…Also swiped three steals against the Terrapins…Recorded her first collegiate double-double against Seton Hall (12/20) with 11 points and a career-high 14 rebounds…Also dished out season-best five assists against the Pirates…Contributed nine points and six rebounds against Wofford (12/30) and finished with two assists and two steals…Tied for team-high in scoring at Boston College (1/3) with 18 points, hitting five field goals and going a perfect 8-for-8 at the free throw line…Tied her career-high with six assists against No. 2 Notre Dame (1/6) and finished with seven points and six rebounds…Tied her career-high with six assists in Tech’s win over Duke (1/10)…Contributed 13 points at Clemson (1/17), connecting of 7-of-10 from the free throw line and led the team in rebounding with seven…Dropped a team-high 22 points against No. 12 Sryacuse (1/20) to lead Tech’s offense in the win and nearly missed a double-double with nine rebounds…Recorded a career-best seven assists against the Orange and hit a personal-high 10 free throws in the win…Blocks a career-high three shots at No. 5 Notre Dame (2/3) and posted six points and four rebounds…Posted a double-double against Clemson (2/21) with 13 points and a team-high 11 rebounds…Finished with seven assists, matching her career-high, and five steals to set a season-best against the Tigers.

2017-18 (True Freshman): ACC All-Freshman Team selection…Started all 34 games in her inaugural season…Finished fourth on the team in scoring, averaging 7.6 ppg…Pulled down an impressive 5.2 rpg…Lead the team in assists with 78…Second on the team in steals, swiping 55 during the season…Earned first collegiate start in season-opener at App State (11/10) and finished with six points, four rebounds, four assists and one steal in 22 minutes…Played 17 minutes in home opener at SC State (11/12) to contribute seven points, five assists, three rebounds, two steals and a block…Saw 16 minutes of playing time against Kennesaw State (11/15) and picked up two steals…Contributed seven points against No. 8/9 Baylor (11/25) in the Junkanoo Jam Championship Game…Pulled down a career- and team-high 11 rebounds against UT Arlington (12/10), 10 coming on the defensive end…Scored 14 points in win over Charleston Southern (12/19) hitting a career-high six field goals for first double-figure scoring game…Added 10 points in Tech’s win over Southern Miss (12/21)…Played a then-season-high 36 minutes in ACC opener against No. 3/4 Louisville (12/28) and finished with nine points and seven rebounds, including a defensive board with 28 seconds left that returned possession to Tech and led to the game-tying shot…Led the Jackets with 13 points against Clemson (12/31) and also recorded three steals…Played 36 minutes against No. 2 Notre Dame (1/7) and recorded seven rebounds and three steals…Chipped in eight points at NC State (1/10)…Led Tech on the boards at Pitt (1/14), pulling down nine…Set a career-best at the free throw line against Wake Forest (1/21), going 9-for-10 to finish with 11 points in the win…Posted season-high two blocks and finished with 12 points at Virginia Tech (1/25)… Set a career-best of six assists at No. 19 Duke (2/1) and pulled down eight rebounds…Recorded a then-season-high four steals in the win at Clemson (2/4)…Posted a solid stat line in win over Boston College (2/8) with 14 points, nine rebounds, five assists and three steals…Recorded second straight game in double-figures with 10 at No. 5 Notre Dame (2/11)… Posted career-high 18 points in win over UNC (2/15), hitting six field goals and going 6-for-9 from the free throw line…Nearly missed a double-double against the Tar Heels, pulling down nine rebounds…Earned ACC Rookie of the Week following her performance against UNC…Swiped career-best seven steals against Miami (2/22)… Pulled down seven rebounds at Florida State (2/25)…Scored 12 points against Clemson (2/28) in the opening game of the ACC Tournament, helping Tech to victory…Recorded seven rebounds and seven points against Virginia (3/1) in ACC Tournament…Posted back-to-back 14 points outings to open WNIT, first against Bethune-Cookman (3/15) followed by UAB (3/18)…Secured 11 rebounds in WNIT contest at Alabama (3/22).

PERSONAL: Father played basketball at Mount St. Clair…Chose Georgia Tech because of the prestigious academics, it felt like home and player development…Lists her most memorable athletic accomplishment as scoring 47 points in the district championship game during her last home game of high school, setting a school record…Says her most memorable non-athletic accomplishment was helping develop the diversity summit program at her high school.