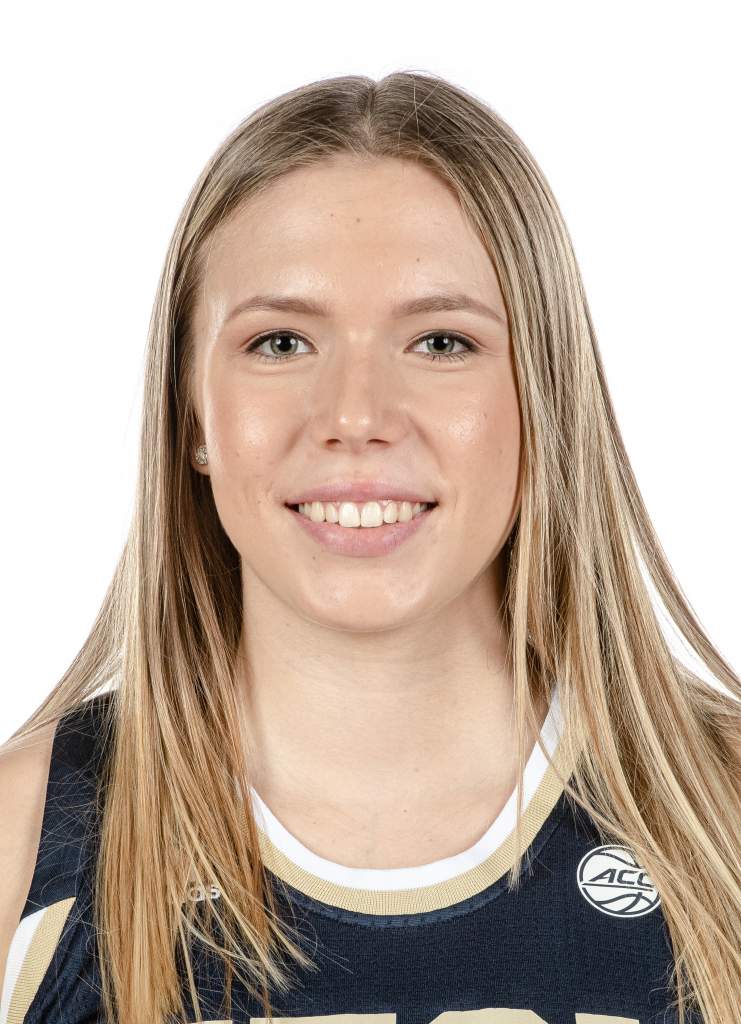 2020-21 (Junior): Has started all 23 games for Georgia Tech thus far…Leads team in scoring, averaging 14.5 points per game…Leads team in assists (81) and steals (41)…Owns 15 games scoring in double-figures…Recorded second career double-double in season-opening game against Georgia State (11/25) with a team-best 14 points and 10 rebounds…Recorded a career night against Boston College (12/9), scoring a then-career-high 27 points, hitting 11-of-16 field goals…Hit career-high five three-pointers and swiped personal-best eight steals…Her 27-point outing marked the first 20-plus point game in her collegiate career…Led Jackets offensively at Notre Dame (12/13) with 19 points on 7-of-15 shooting…Dished out eight assists in first-ever win over Notre Dame, while collecting three steals and a block…Named ACC Player of the Week on Dec. 14 after helping Tech to a 2-0 start to ACC play…Continued impressive season with a 30-point performance against No. 3 NC State (12/31) to set a new career-high…Posted her second double-double of the season against the Wolfpack with team-high 11 rebounds…Finished game going 7-for-8 from the free throw line, hit three treys and swiped three steals…Played 36 minutes at Notre Dame (1/3) and finished with 11 points, seven rebounds, four assists and three steals…Led Jackets with 15 points at Clemson (1/7), hitting three 3-pointers, and posting four rebounds, three assists and a steal…Posted a team-high 17 points against Virginia Tech (1/10) as the Jackets erased a 10-point deficit entering the final quarter to take the win…Led all scorers at Wake Forest (1/21) with 17 points, finishing with four assists and two steals…Went 6-for-7 from the free throw line for seventh consecutive game in double-figures…Finished with 17 points in win over Florida State (1/24) for eighth-straight game in double-figures…Hit three treys on four field goals at Miami (1/28) to post 13 points in Tech’s win…Scored team-high 17 points in win over Clemson (2/4), going 7-for-15 from the field, while dishing out five assists and two steals…Led Tech with 22 points against Wake Forest (2/7), hitting four three-pointers…Dished out a career-high 10 assists in win over Miami (2/16), nearly missing a triple-double with nine points and seven rebounds…Finished with a team-high 17 points at North Carolina (2/25), going 7-for-15 from the field… Dropped in a team-high 22 points in win over Pitt (2/28), hitting three field and matching her career-high at the free throw line, going 7-for-10… Led Tech with 17 points against NC State (3/6) in the ACC Tournament semifinals, going 8-for-11 from the field, while dishing out five assists.

2019-20 (Sophomore): Appeared in all 31 games and started in 30…Finished season averaging 9.1 points, 4.3 rebounds, 2.6 assist and 1.4 steals per game…Led team in steals (42) and second on the team in assists (81)… Recorded 14 games scoring in double-figures…Shot 39.3 percent from the field and 54.5 percent at the free throw line…Recorded a strong night in the season-opener, scoring 16 points against Houston (11/5) off seven field goals…Also pulled down eight rebounds against the Cougars…Chipped in 11 points at Georgia (11/17) in Tech’s first win in program history in Athens…Added 12 points in Tech’s win over Seton Hall in the Junkanoo Jam (11/28), going 5-for-6 from the free throw line…Poured in a personal-best 18 points in Tech’s win at Kennesaw State (12/8), hitting a career-high four three-pointers and pulling down nine rebounds…Dropped team-high 16 points against No. 11/12 Texas A&M (12/20) in Coqui Classic, going 7-for-13 from the floor, including two three pointers, and dished out five assists…Played a full 40 minutes in Tech’s win over Rice (12/21), finishing with six points, three rebounds and two assists…Posted 13 points, four rebounds, four assists, two blocks and a steal in ACC opening win over Virginia (12/29), playing the full 40 minutes…Dropped 15 points in Tech’s upset over No. 23 Miami (1/2) to tie for the team lead…Also recorded four steals against the Hurricanes…Posted third-straight game in double-figures with 11 points at Wake Forest (1/5) while recording two steals and two assists…Added four points and four rebounds in Tech’s win at No. 11/11 Florida State (1/9)…Dropped 17 points in the first half at Syracuse (1/16) to lead Tech and finish one point shy of matching her career-high…Tied her career-high in field goals hitting seven at Syracuse…Chipped in 10 points against Boston College (1/19) and recorded three steals…Added 11 points, four assists and two rebounds against North Carolina (1/23)…Led Tech with 12 points at Duke (1/26) and recorded four steals, three assists and two rebounds…Paced Tech with eight rebounds against Notre Dame (2/2) and finished with six points…Contributed six points and two steals in win at Pittsburgh (2/6)…Hit a three-pointer and added nine points at Virginia Tech (2/13) with two assists and two steals…Dished out team-high five assists in Tech’s win at NC State (2/16), while recording four steals and seven rebounds…Finished with nine points in win over Wolfpack…Attempted a career-high 16 field goals to finish with 11 points against No. 5 Louisville (2/20)…Posted first career double-double at Clemson (3/1), matching career-high with 18 points and setting career-high with 12 rebounds…Recorded eight points and five rebounds in Tech’s win over Pitt (3/5) in ACC Tournament second round action.

2018-19 (True Freshman): Took the floor in her first collegiate outing at Houston (11/9), contributing three points, three steals and two assists…Chipped in nine points against Western Carolina (11/14)…Saw 28 minutes of action at No. 7 Maryland (11/29) in the ACC/Big Ten Challenge, posting eight points, six steals and four assists…Came off the bench for 19 minutes against Alabama State (12/5), swiping three steals and dish out three assists to help Tech to victory…Added seven points in Tech’s win at Boston College (1/3), hitting a three-pointer and two free throws, while collecting three steals…Added three points, connecting on a triple, against No. 2 Notre Dame (1/6)…Scored 10 points in the third quarter at Clemson (1/17) to record a then-personal-best in scoring…Hit two three-pointers against the Tigers, also marking a personal-high…Earned her first collegiate start against No. 12 Syracuse (1/20) and recorded a career-high six rebounds…Recorded her first collegiate block against NC State (1/27)…Contributed 14 points at UNC (1/31), going a perfect 6-for-6 from the free throw line and connecting on 4-of-8 from the field…Went 2-for-6 from three-point range at No. 5 Notre Dame (2/3) to set personal-bests and tied season-high of six rebounds…Went 4-for-4 at the charity stripe and recorded three steals in Tech’s win at Wake Forest (2/10)…Contributed six points and five rebounds in win over Clemson (2/21) while recording three assists and three steals…Ted her career-high with six steals at Virginia (2/24)…Earned the start at No. 15 Miami (2/28) and finished with eight points, four rebounds and four assists…Dished out personal-best seven assists against No. 22/21 Florida State (3/3).

PERSONAL: Member of student council in high school…Received “good athlete” recognition with graduation…Captain of National Team and club team…Chose Georgia Tech because of the competitive basketball, high level of academics and the team culture…Enjoys reading, singing, watching movies and meeting new people…Started playing basketball at age seven when she attended a practice near her house…Has several memorable athletic accomplishments including the high school world championships in 2017…Enjoyed the atmosphere and competitiveness of the tournament where the team finished third…Pronunciation: Lotta-Maj (LOW-tah MY) Lahtinen (LAW-tin-in).