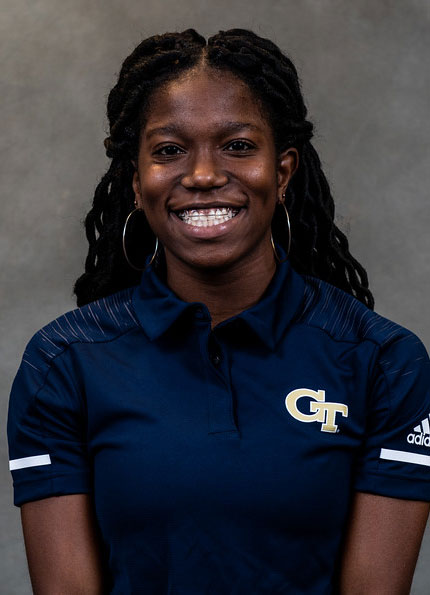 2018 Track:
Indoor: Had the top time in the ACC (8.02) – a career-best mark that came at the Clemson Invitational to finish second overall (just 0.04 off the 11-year-old school record) and now ranking third all-time at Georgia Tech …  ranked fourth in the country and 22nd in the world (8.02) … finished first or second in every competition this season except her final regular-season meet at Tiger Paw, but immediately rebounded to win her first conference title … two-time ACC Performer of the Week … was also selected to represent Jamaica at the IAAF World Indoor Championships in England after being the highest-ranking Jamaican in the 60m hurdles this year, but chose to participate in the NCAAs after winning conference. Outdoor: 2018 second-team all-American in 100m hurdles, all-ACC First Team, Outdoor ACC Champion (100m) … became the seventh student-athlete in ACC history to win both the 60m hurdles and 100m hurdles in the same year … is also the second Yellow Jacket in league history to accomplish the feat, joining Andria King, who won both consecutively in 1999 … took a PR of 12.89 into the postseason – ranking second all-time in school history … has broken school record twice (12.86), running a 12.83 and 12.74 – however both times were wind-aided (above a 2.0) and not officially records … her 12.83 ranked first in the ACC, fifth in the NCAA East, and 12th in the nation … in wind-legal conditions, ranks 29th in the world currently (12.89); in all-conditions, ranks 15th in the world … was the fourth-fastest 100m Jamaican in the world … has qualified to the NCAA Outdoor Championships two-straight years (2017, 2018) … also set a PR in the 100m with a time of 11.56 to finish third … helped run the ninth-fastest shuttle hurdle relay time in NCAA history, turning in a 53.16 to win the Florida Relays.