“First off, a couple things, one is give Bethune-Cookman credit. They’re a good team, they’re picked to win their league. [Cletrell Pope] was Preseason Player of the Year for this upcoming season. I told our guys, when there are 32 conferences in the country, and you’re picked to be player of the year in your league, you’re a good player. And he showed that today. He’s a good player. That was no fluke on him being able to play like that. Secondly, it’s just going to be tough for us until we get Jose [Alvarado] back because your floor general is not on the floor so you’re putting so much stress, tension and pressure on Bubba Parham where it’s something he’s not used to where it’s all being thrown on him to kind of have to run the team. And that’s not easy to do and so that’s just part of it. But we found a way to get a W. Our defense was not good the first half but the second half we were. You had been very, very good defensively, our numbers are we’re one of the best defensive teams in the country. But the two things that have been the Achilles’ heel for us has been our turnovers, which we were way better today besides Moses [Wright] and James [Banks III] with nine combined. But our guards did a much better job. And our free-throw shooting. Those have been our two Achilles’ heels. Defensive rebounding, we’ve got to do a better job. James had eight blocks, so our guards have to be better at crack backs. Our guard rebounding has to be better. We’ve got to be better with guard rebounding, on cracking back. But anyway we got a win and found a way to get a ‘W’. Moses and James each had a double-double so that’s a great deal there, but, we found a way and got a W.

On if he felt they were a step slow defensively in the first half:

“Yeah, we didn’t have the same energy to start. There’s no excuse for that. We had good practices. I don’t know if it’s just part of coming off a tough loss and you’re just trying to get your energy back, but that’s something we’ve got to be better at. Nobody needs to generate energy for us, we’ve got to generate it for ourselves and we’ve got to do that through defense. That’s what we’ve got to do, and in the first half we just didn’t defend like we needed to.”

On how Michael Devoe has developed into a guy who can take over at the end of a game:

“One, he had a really efficient game. He had 27 [points] on only 16 shots. And he would have had 30 if he would have made free throws. The biggest thing with him is he’s got to get better on the defensive glass. But he’s a really good basketball player, he made some tough shots today, tough layups. His pace, the game is slowing down for him. He’s seeing things better, even though he made that pass to Moses [Wright], which is just unacceptable for him to throw that at that time. But that being said, he’s a really good basketball player and he’s going to continue to get better. He’s made great strides from his freshman to his sophomore year, there’s no question on that.”

On what made Bethune-Cookman’s Cletrell Pope such a challenge on the boards:

“His thing was just an energy deal. He just plays hard, he’s a rebounder, that’s what he does. Part of it is that James [Banks III] has eight blocked shots, so, he is going to block the shot and then [Pope] is in there for the offensive rebound. And that’s where we didn’t do a good job of cracking back. And then James also has to recognize certain times when a kid is already going to take a bad shot, there’s no need for him to rush out on the shot block. But he just has a great motor, Pope. You know, I showed our guys film the other day on Kenneth Faried, just about how hard he plays on his rebounding. I showed film on Patrick Beverly, about his defensive intensity. I showed film on Dennis Rodman, about how hard he rebounded. To show that this is what motor is. This is the definition of motor. I felt like Pope was in the film sessions because he played with that motor today and got a bunch of those boards. But part of that is we’ve got to be better on the crack backs, and then James has to be knowing when not to go block a shot, meaning, the guy is already guarded and taking a bad shot, there’s no need for you to leave the block zone.” 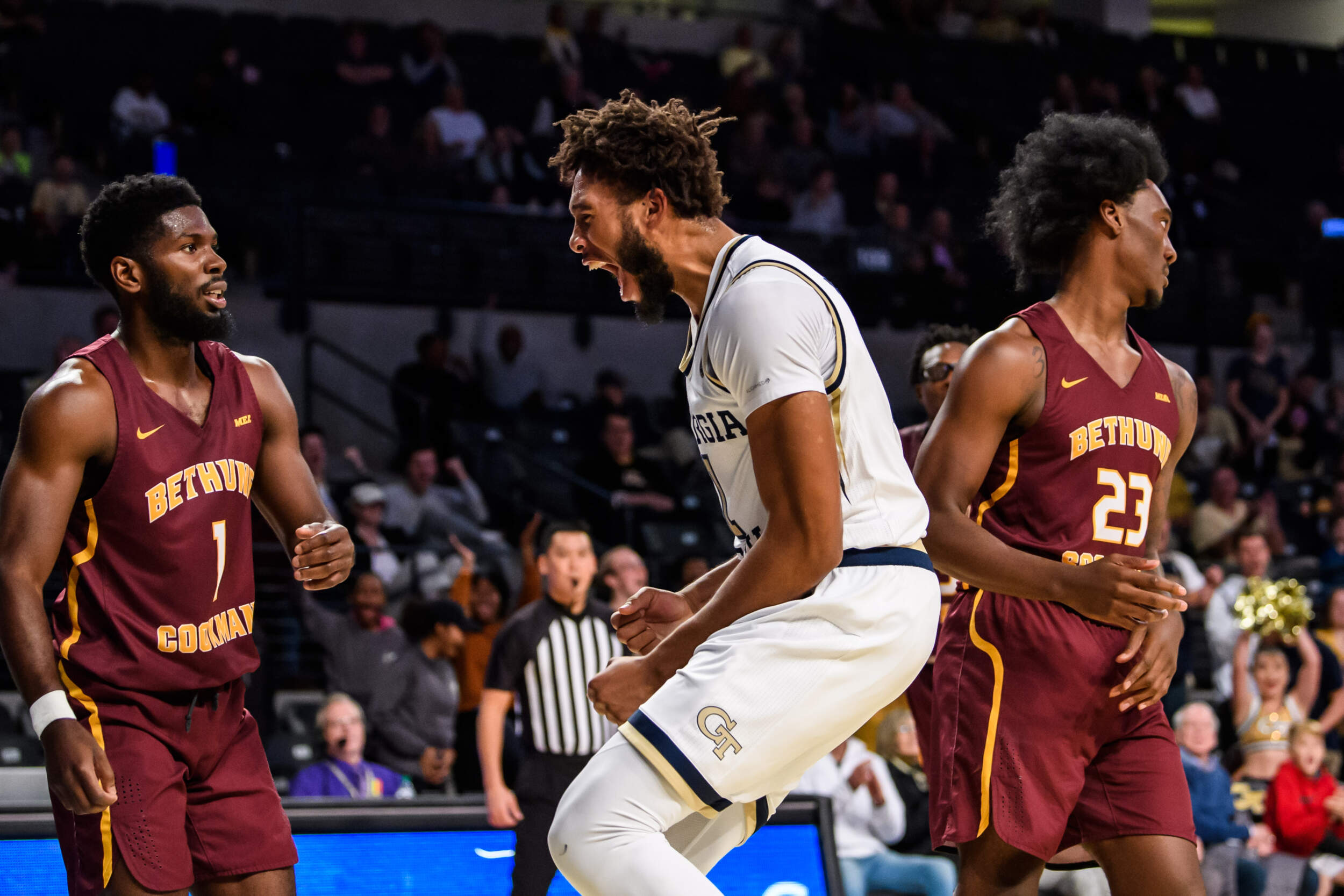 “I’ll tell you what I told my team – I’m really, really proud to be their coach. And not because a win or a loss or because we competed. But as a coach you love your guys to emulate playing the right way. I thought tonight and this season we’ve had guys who are putting winning above themselves. We have guys with individual statistics but we’re an unselfish group. We’re fun to coach. We play really hard. We don’t care who gets the credit. As I sit up here and say that, I could not be more proud to be the coach of Bethune-Cookman University. But at the same time, it stings. We came here to win. That’s what we told our guys. We didn’t come here to compete and get a moral victory. I’ve got unbelievable respect for Georgia Tech and coach [Josh] Pastner, but we came in here to try and get a W and give ourselves a chance down the stretch. Unfortunately, we just didn’t make enough plays on that defensive side late.

“We preached three things in our program: defense, rebounding and toughness. If you told me we were going to have 20 offensive rebounds tonight, I probably would not have agreed with you. But I was really proud, specifically with Cletrell Pope, of our guys continuing to attack. We couldn’t put the ball in the bucket but we had guys continue attack that glass.”

On the challenges of defending Cletrell Pope:

“It’s the weirdest thing. I’ve never coached somebody like him. He’s got great motor number one. He plays really hard… he’s really wiry and strong. He’s got a great second bounce. He’s just relentless. When the shot goes up, it’s like an all-you-can-eat buffet. He sees that out there and he just wants to get as much as he can. He was special tonight for us.”

“I think a lot of schools like us, we’re traveling a lot of miles and a lot of different venues. I wish we had more home games, but at the same time I think you get a chance to really find your identity as a group. Come in here and play quality programs like Georgia Tech… I’ll tell you, it’s tough to be on the road for the next five games. I think it really builds character. It’s something we can draw back on it in the MEAC games.”

On takeaways from tonight:

“I thought in the second half we didn’t do a great job guarding them. They had some really easy… we put them on the free throw line. But what do we learn from this? I think we learn that we have a group that will stay together through adversity. That’s going to be key as we move forward.”