THE FLATS – Georgia Tech will host Nebraska in the 21st renewal of the Big Ten/ACC Challenge, with the game taking place on Wednesday, Dec. 4 at McCamish Pavilion. ESPN announced the full lineup of matchups for the Challenge Thursday in conjunction with the Atlantic Coast Conference and the Big Ten Conference.

The 14 games will take place over a three-day period from Dec. 2-4. Tip times and network assignments will be announced at a later date. ESPN, ESPN2 and ESPNU will combine to televise the entire 2019 event, matching top college basketball programs playing for conference supremacy and the Commissioner’s Cup. All games will also be available via the ESPN app.

This will be the first meeting between the Yellow Jackets and the Cornhuskers in the annual Challenge, the first new opponent for Georgia Tech in the series since 2012, when the Jackets played Illinois for the first time. The teams have met once previously, a 66-49 Tech win on Dec. 28, 1983 in the Cotton States Classic, which was played in the old Omni arena in downtown Atlanta.

Season tickets for Georgia Tech’s 2019-20 are on sale. The men’s season ticket includes 10 Atlantic Coast Conference home games, including defending national champion Virginia, Duke, Notre Dame and Louisville, plus the Nebraska game and a Nov. 25 non-conference game against Arkansas from the Southeastern Conference. 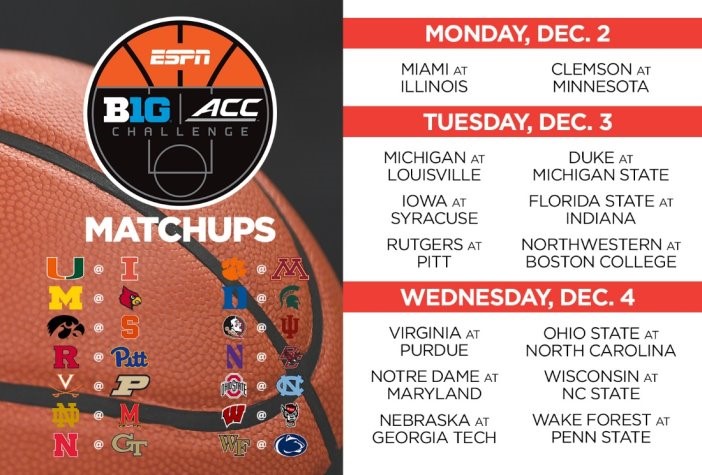 TECH IN THE BIG TEN/ACC CHALLENGE