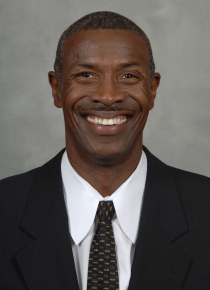 Nat Page is in his 24th year as an assistant coach for the Georgia Tech track & field program. He is responsible for coaching field events, including high jump, long jump and triple jump, as well as the men’s and women’s sprint hurdle events.

Waller joined Howard on the 2004 U.S. Olympic Team in the high jump after capturing her second U.S. title at the U.S. Olympic Trials in Sacramento, Calif.

A native of Evanston, Ill., Page was a NCAA Champion high jumper at the University of Missouri in 1979. He was ranked in the top 10 in the world from 1979-81 and earned a spot on the United States’ 1980 Olympic team after finishing second at the U.S. Olympic Trials.

Additionally, Page also competed at a world-class level in the both the high and intermediate hurdles from 1984-92. From 1990-92, he was ranked in the top 10 in the world in the 400 intermediate hurdles. A member of the United States’ 1992 World Cup team, Page was a finalist at the U.S. Track and Field Championships every year from 1985-91.

He was inducted into the University of Missouri Athletic Hall of Fame in 1999, where he was a five-time all-American and a four-time Big 8 high jump champion. He was named outdoor MVP of the Big 8 Championship in 1978.

From 1988-91, Page served as assistant coach at California State Polytechnic University, where he earned a bachelor’s degree in physical education.

Page resides in Atlanta with his stepchildren, Tyler and Ryan.