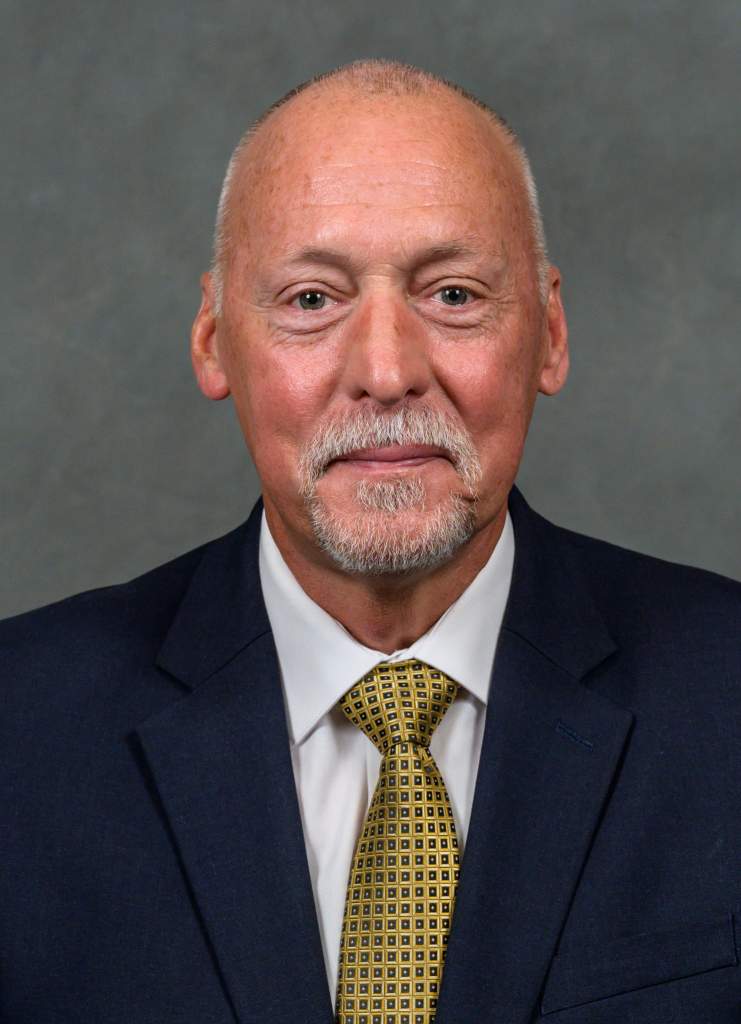 His more than 40 years of coaching has also featured stops at Ferris State and Eastern Kentucky before arriving at Georgia Tech in 1979. Hinsdale and his wife, Laura, have two sons, Bobby and Luke and a daughter, Kelsey.

A 2003 inductee into Ferris State University’s Hall of Fame, Grover Hinsdale enters his 41st season at Georgia Tech and 27th as head coach of the men’s track and field team.

The Yellow Jackets have posted seven top-10 indoor and outdoor NCAA Championship finishes during Hinsdale’s tenure. He was named Atlantic Coast Conference Indoor Coach of the Year in 2002 and 2008 and has tutored three Olympic Gold Medalists, 13 NCAA champions and 90 all-Americans.

Among the group of talented athletes that struck gold is Derrick Adkins, who won Olympic gold in 1996, and was a two-time national champion and six-time all-American during his Tech career. A second Olympic medalist is Derek Mills, who won gold as part of the 4×400 relay team in Atlanta. He was a four-time national champion and an 11-time all-American for the Jackets. The third Olympic gold medalist is Angelo Taylor, who won gold in the 400 intermediate hurdles at the 2000 Sydney Games. He won two national titles and was a four-time all-American during his career on The Flats.

In 2005, the Yellow Jackets tallied a pair of fifth-place finishes at the indoor and outdoor ACC Championships. The Jackets posted their first indoor NCAA finish, since the 2002 season, finishing in a tie for 48th place. Senior Montrell Person garnered all-America honors in the 60-meter high hurdles.

Hinsdale guided Tech to fourth- and fifth-place finishes at the outdoor and indoor ACC Championships in 2004. The Ramblin’ Wreck tallied 103 points at the outdoor meet, the second highest tally by a Jacket squad in the history of the program. A total of five ACC titles were won by Yellow Jackets and seven garnered all-ACC accolades. Senior Brendon Mahoney captured four ACC crowns en route to being named indoor and outdoor ACC Performer of the Year. Mahoney and junior Montrell Person went on to earn all-America honors at the Outdoor NCAA Championships, becoming the 68th and 69th athletes to do so under Hinsdale’s watch.

In 2003, Hinsdale led the Jackets to their second consecutive top-three finish at the Indoor ACC Championships. Six Tech athletes earned all-ACC honors with distance runner Kyle Rabbit earning the accolade in the 3,000 and 5,000 meters. Junior Brendon Mahoney claimed all-ACC honors for the third straight year in the mile, while seniors Bryan Swarn and Brian Fraser captured conference accolades at the meet.

At the Outdoor ACC Championships, the Yellow Jackets scored 96 points to tie for fourth place. Brewer and Fraser captured individual ACC titles in the hammer throw and triple jump, while the 4×400-meter relay team of Brian Ford, Sharif Azim, Matt Trester and Swarn took first place at the championship. The Jackets qualified five athletes for the Outdoor NCAA Championships, plus the 4×400 relay team. Brewer claimed all-America honors, finishing 13th in the hammer throw.

Hinsdale garnered his first ACC Coach of the Year honor when he guided the Jackets to a third-place finish at the conference championship in 2002. That season, three Jackets earned all-America honors under Hinsdale’s tutelage, as Brendon Mahoney was seventh at the NCAA Championships in the indoor mile, and Chris Sinotte placed 10th in the javelin at the outdoor meet. Bryan Swarn was 11th in the outdoor 400.

In 2000, Hinsdale coached the men’s outdoor 4×400 relay team to a sixth place finish at the NCAA Championships, and also had two individual all-Americans as Bryan Swarn (400 meters) and Malcolm Leason (triple jump) earned that distinction. Following the 2000 NCAA meet, Tech athletes had competed in the NCAA Championship meet for 17 consecutive years.

He has put his stamp on the Tech program by coaching 13 NCAA national champions in his first 12 years as head coach on The Flats.

Hinsdale came to Tech in September 1979 as an assistant track coach, a position he held for 13 years under the legendary mentor Buddy Fowlkes. He was promoted to assistant head track coach in 1992 and was named head coach the following year.

He led Tech to a seventh-place NCAA Indoor Championship finish and an eighth-place NCAA Outdoor Championship finish during the 1998 season. That year, the Jackets produced three national champions, as Krummenacker won the indoor 800 meters, Taylor captured the outdoor 400 intermediate hurdles, and the men’s outdoor 4×400 relay team captured the NCAA title with a time of 3:01.89. Krummenacker also ran the fastest American mile that year, while Taylor captured the Track & Field News Male Athlete of the Year award, while finishing with the second fastest time in the world in the 400 intermediate hurdles with his time of 47.90 seconds. Krummenacker capped his career by winning MVP awards at both the indoor and outdoor ACC Championship meet, which marked the third and fourth times, respectively, he was honored in his career.

At the 1997 NCAA Indoor Championships, Hinsdale guided Tech to its best national finish ever, as the Yellow Jackets tied for third place with 25 points. That season Tech was led by Krummenacker, who won the 800 meters and then teamed with Tomas Motiejunas, Michael Johnson and Angelo Taylor to finish sixth in the 4×400. Taylor also finished third in the 400 meters. Eric Bowers also placed third in the long jump.

During Hinsdale’s first full season in 1994, he guided Tech to fourth place at the NCAA Outdoor Championships. After claiming national titles in the 400 meters, 400 intermediate hurdles and 4×400 relay, the Jackets tallied 34 points, Tech’s highest total ever.

A former decathlete at Ferris State, Hinsdale now coaches the 400m, 400m IH and 4x400m relay. His first 14 years with Tech were spent in the field events.

Some of the top field performers under Hinsdale include Rich Thompson, a three-time all-American in the triple jump; Mark White, an all-American discus thrower who won two ACC Championships in the discus and was the 1990 ACC Champion in the shotput. Other top athletes are Eric Bowers, the 1995 and 1996 ACC champion and current ACC record holder in the long jump; along with Joe McDonald, who broke the school record in the decathlon for the third straight time in 1992 and was the ACC indoor long jump champion in 1991.

A Sand Creek, Mich., native, Hinsdale lettered four years in track and field at Ferris State. He won the Coaches Award twice and was elected team captain three-straight years. He graduated in 1976 with a Bachelor of Science degree in psychology and human science. He later received his master’s degree in physical education from Eastern Kentucky in 1979.

Hinsdale was inducted into the Ferris State Hall of Fame on Sept. 19, 2003.

In November of 2000, Hinsdale was the recipient of the USATF Outstanding Coach Award. The award recognized him for his coaching of 2000 Olympic gold medalist Angelo Taylor.

Hinsdale is married to the former Laura Adams. The couple has two sons, Bobby and Luke, and a daughter Kelsey.