“Certainly we were disappointed in the way we played last weekend, I think especially in the first half. We came out in the second half and played a little bit better but we dug ourselves quite a hole and weren’t able to get out of the hole. This week will be a tremendous challenge. [Clemson] might be as talented a team as we’ve played since I’ve been here. Defensively, they’ve got multiple first-round draft picks and offensively, they’ve got a great deal of skill. I think their running backs and receivers are as good as anyone’s in the country. It’ll be a huge challenge.”

“He’s a very accurate thrower. He’s probably not as much of a dual threat as Kelly [Bryant] is, but he’s a very nice player, really accurate and throws a really nice ball.”

“They’ve probably got three, maybe four, first-round draft picks up there on the defensive line. So there won’t be many teams who will have that. The challenge becomes just trying to find a way to block them or read them to get to the second level. Hopefully, with the nature of what we do, we won’t have to block all those guys and we’ll be able to double some of them.”

On preparing for a highly ranked opponent:

“You’ve always got a chance. I’m not saying it’s impossible but they’re a really good team. We’ll have to play better than we’ve played to this point. If you do that and you execute, you’ve got a chance. With the nature of what we do, it gives you a little bit of a chance as opposed to having to line up in an I-formation and having to block all those guys. They haven’t given up very much and, like in the Texas A&M game when you watch, one [touchdown for A&M] was busted coverage and one was a deflection off a guy in the end zone that another guy in the end zone caught. And really, the other touchdown they had really should’ve been an interception. It went through the guy from Clemson’s hands.”

“I think they struggled a little bit in the last game blocking, but they were very productive. They had, I guess together, about 190-some yards rushing out of the position, so that’s a positive. And you’d like to think, as guys who haven’t played much, that they’re going to get better the more they play. Overall, I was pleased with them.” 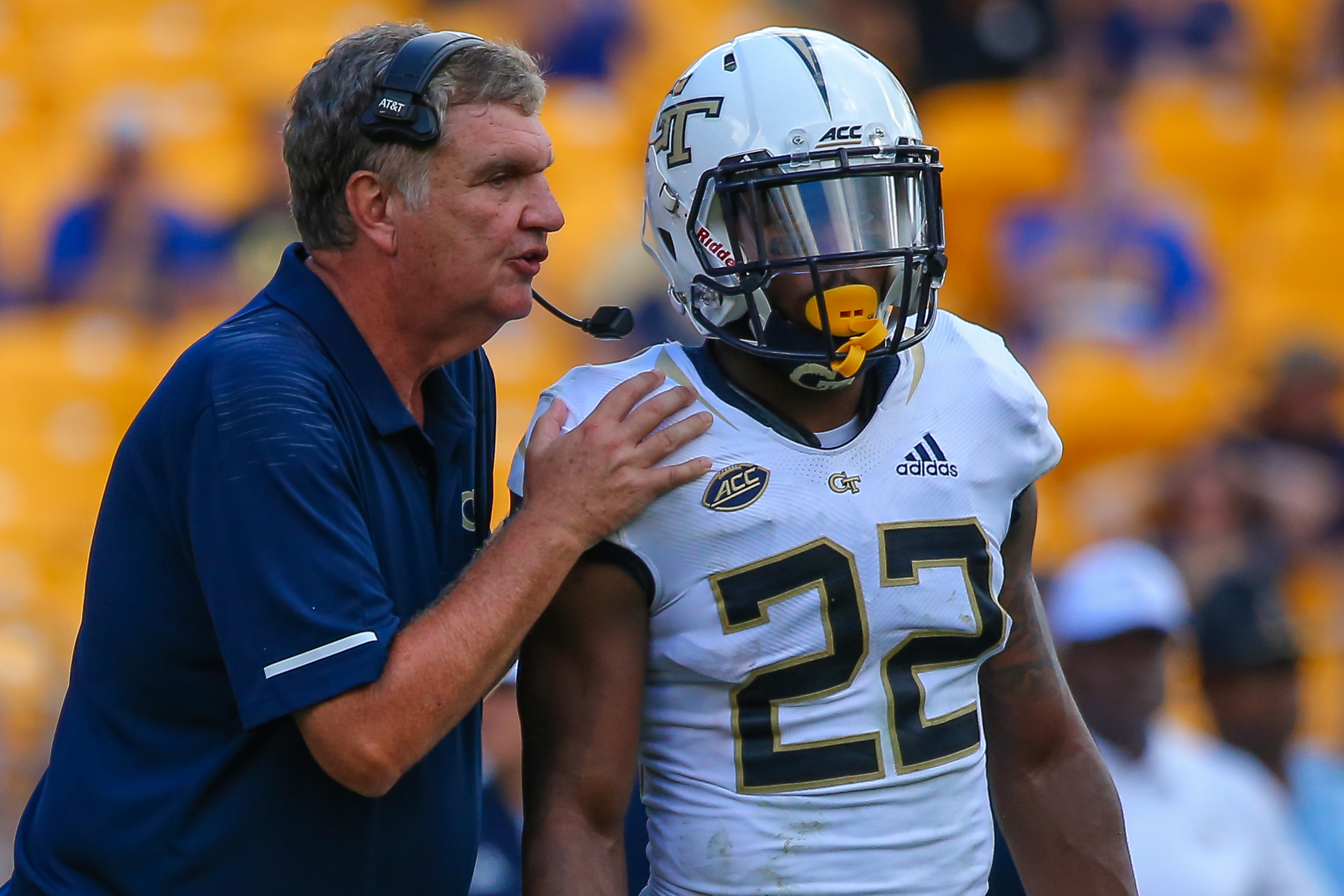 “He’s very competitive and he’s a tough kid. You can’t play at this level at 180 pounds and take the shots that he takes and do that without being a tough kid. And he loves to play the game. He doesn’t shy away from anything – I wish he would shy away from contact sometimes; he needs to step out of bounds or slide. We’ve talked to him about that. He played last weekend and he probably wasn’t 100 percent healthy and he went out there and played.”

On what he sees from how Marshall throws in practice:

On what Marshall needs to improve upon moving forward:

“I think we’ve just got to be consistent. We’ve got to take care of the ball and we’ve got to play with some consistency. You’re not going to beat a team as good as Clemson if you go out there and turn the ball over. When you get a chance to make plays, you’ve got to make them. We had two or three shots the other day that could have been home run plays, touchdowns, and we missed them. Some weren’t his fault. The first pass we got knocked back on the right side and he couldn’t set his feet to throw it. The second one we just need to make a play. It hit Brad [Stewart] in the hands but it would have been a really hard catch. A little better throw and that was a clean pocket. The one to Jalen [Camp] in the third quarter, he could have made a better throw but we’ve got to make that play. If we got higher and run the route better, he’s going to be all by himself. There was another third-down play where we got stopped, they turned the guy loose on the crossing route and the lineman lost his guy and the back had to pick him up and he got sacked. Some of those plays, if you make two of those five, it’s a whole different game. For us right now, we’re not making many of them. It’s not TaQuon, it’s everybody.”

On if the potential of his team:

“I think this team still has a chance to be pretty good. We’ve played three games. We knew going in that we had a tough schedule. I think it was rated second or third in the country. We dug ourselves a hole. Just like we dug ourselves a hole in the last game, we dug ourselves a hole. In my opinion, I think we should have won the last two games. If you ask Charlie [Strong] or Pat [Narduzzi], they will tell you that they should have won the game and they did. But we didn’t get it done, for whatever reason we didn’t do enough to win the game. Now we’ve still got nine games left. We’ve still got a chance. But you’ve got to go one game at a time. You don’t give up. You just keep plugging. Like I told our team this week, our challenge this week is to get better and get consistent and play better. And then we’ll see what happens with the result. That’s all you can do.”

On how Clemson’s defensive staff, led by coordinator Brent Venables:

“They do a good job. You can’t win as many games and be as good as they are without having a plan. They adjust fairly rapidly. If you find something that’s giving them a problem, they can adjust. They create a ton of negative plays and sacks. When you do that, you can play pretty good defense. If you watch their games, when you break down the Georgia Southern game, I think at one point Georgia Southern had run 30 plays for 39 yards. They had one first down in the first half. The Furman game wasn’t much different. Texas A&M, they hit some plays, they matched up a little better and they hit a few plays. But again like I said, it’s hard to put together consistent plays without them getting a sack or a negative play or something to get you behind the chains. You’ve got to be able to protect your quarterback if you’re playing them because they’re going to come after him.