Opening statement:
“Well, we were disappointed like I said with our performance a week ago. Looking forward to an opportunity to have a chance to play this week. A conference opener, historically in a pretty tough place to play. Pitt is a program with a lot of tradition and a lot of history. They had a tough game on Saturday as well. They probably melted down in special teams, if possible, worse than we did. That Penn State game, I watched it at home. They should’ve been ahead at the end of the first half, the game was a lot closer than the score. It just kind of got away from them in the end with some turnovers and special teams. So, historically, when we play them it’s always a tough, hard-fought game and we expect it’ll be the same this week.”

On what was corrected in kickoff coverage in-game against USF and what still needs to be corrected versus Pitt:
“Well, we got a couple of things corrected and there was still some things that weren’t. We’re going to change some personnel, that’s what I’m going to do. We’re going to get some older guys out there.”

On special teams and field position:
“Well, special teams should not turn the ball over and the field position thing is a team thing. It’s like I’ve said before, I mean, if you’re making first downs and can move the ball, you’ve got a chance to punt them deep into their territory. If they’re moving the ball and they take over on their one and they move down to the 50 and punt you out on your one, they’ve done a good job. It’s a team type deal. So what we’ve got to do is take care of all the things we haven’t done a good job of in the first couple of games. One is the turnovers and, two, our kicking game is not very good.”

On the positives from the defense versus USF:
“There were some positives. Like I said, a lot of what happened on defense was self-inflicted. The coaches are learning the players and we’ve got to figure out who the players are and play the players. It’s not Little League, not everybody gets to play. So I think the more we play, the more that’ll happen. I think the kids will get better at it. They’re still learning and we made a lot of mistakes.”

On the frustrations with losing so many close games over the past year, especially given the success he’s previously in close games:
“Well, it’s frustrating, I think the last game, you know, we created our own problems. If we could hold on to the ball, I really feel like we were going to score and go up 10 with seven minutes to go. Even if they came back down and scored, I felt like we could go score. We scored every time we had the ball in the second half [to that point]. So we turn the ball over and then they go 80-something yards and score, but I still felt like we were going to win the game. If we could’ve held them to a field goal or whatever [after the late interception], you’d still have a chance. We just didn’t get it done and that’s why I said you can put it on the offense too. It was a pretty sad time to get a penalty, when you’re driving to win the game.” 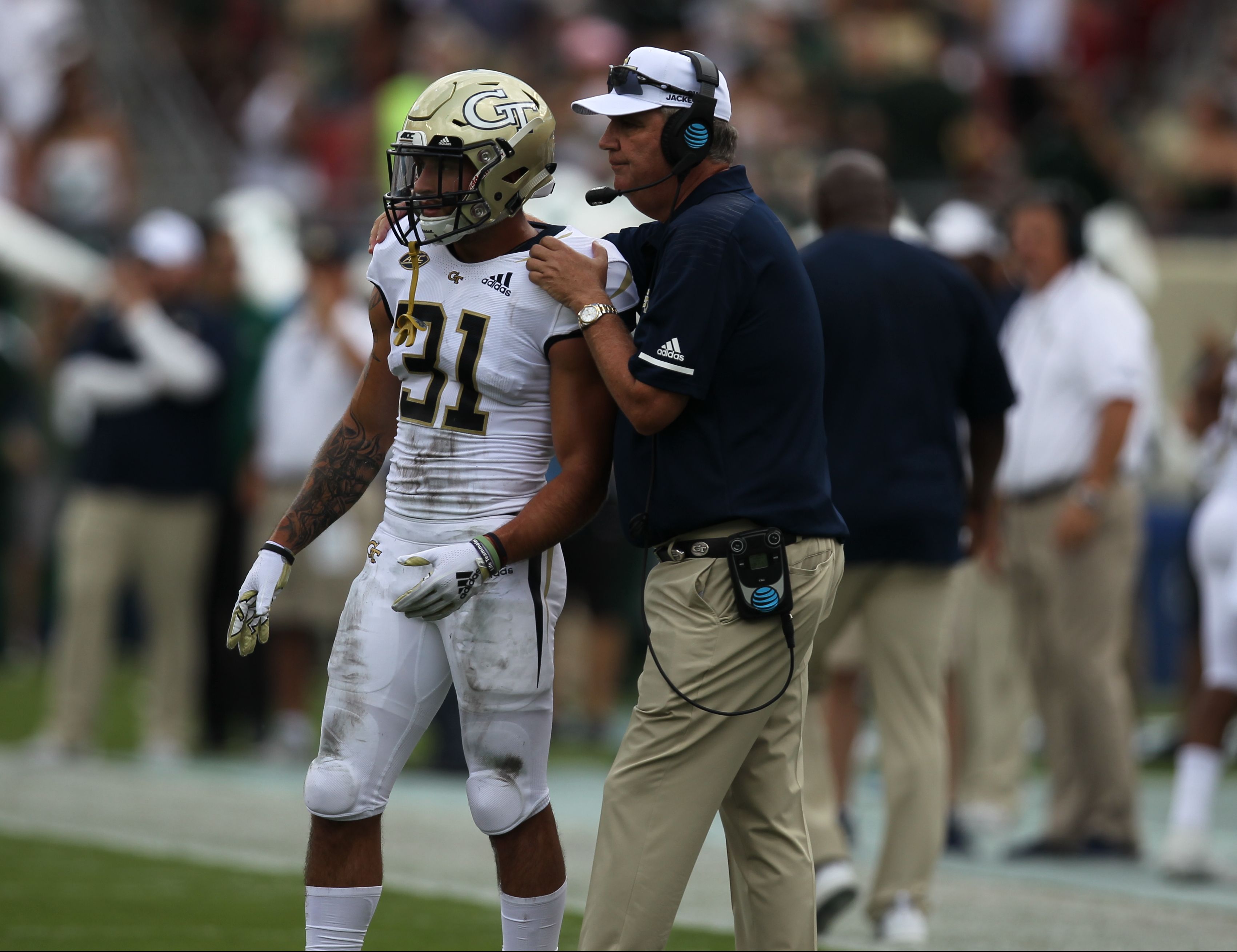 On whether the mistakes have been due to the mental makeup of the team or does someone just need to make a play:
“Somebody has got to make a play. We also sometimes create our own luck. Just like in the Penn State-Pittsburgh game. Penn State didn’t make a play and Pitt’s punter dropped the ball, they fumbled the ball. Just like here last year when we were playing Pitt, they got third-and-one early in the game. They tried to run the speed sweep and put the ball on the hip of the guy. The ball goes rolling in the backfield, we get it and take the lead. We haven’t got much of that — in fact, what’s happened is we’ve been the ones who do that. You’ve got to quit beating yourself.”

On Tobias Oliver:
“I mean, I’ve got confidence in Tobias. He went in and did a good job. I’m proud of the way he played. He was hard to tackle, he was elusive. We ran three plays. He made some guys miss and we blocked the edge. By scheme, we kind of had them out leveraged, so we scored three-straight touchdowns. They made a couple of adjustments and then we ran two plays, we didn’t block anybody and its third-and-nine. I’ve got [TaQuon Marshall], who’s the captain of the team and the starter, he’s standing there pulling on me going ‘Coach, I’m ready, I’m ready.’ Well he’s the starter for a reason, so I put him back in. He converts the third-and-nine, we’re driving down the ball and we fumbled the ball. Certainly the quarterback didn’t have anything to do with us fumbling the ball. If we need Tobias, I’m confident that he can go in, play and run the game plan and do what we do. I’m not going to go to game-plan just to play a guy.”

On who will start at b-back against Pitt:
“Well, I said at the start that we had the depth there and we’re going to find out. You’ve got Jordan Mason, who’ll probably start, you’ve got Jerry [Howard] who played a lot last year. You may see Christian Malloy play, I think he’s a talented kid. We’ll see if he has to play, if we get that deep.”

On perimeter blocking against USF:
“It was okay. We ran a little something that we hadn’t run much and I think we kind of had them out leveraged. Tobias did a good job running the ball.”

On bizarre games against Pitt over the years and how it relates to the close games that Tech has played of late:
“Honestly, I don’t think about that stuff. I’m getting ready to go play, try to get our guys ready to go play the conference opener. As disappointing as last week’s game was, it’s a non-conference game. We’re getting into the conference, our goal is to try and win our division. If we’re going to do that, we need to win on Saturday. It’s like I told the team, last week is over. It was over yesterday, you move on. You correct, you move on and you get ready to play Pitt. We’re going up there to try to put in a plan that we feel gives us the best chance to win the game and then you play. You’ve got to go make plays.”