Director of Annual Giving for Athletics 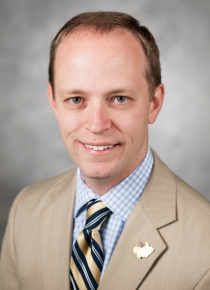 Nick Parsons joined the Georgia Tech Athletic Association as director of annual giving for the Alexander-Tharpe Fund in April 2015.

Parsons arrived on The Flats from the University of California, where he was a member of the athletic development staff. He began as an intern in June 2006 and received promotions to development associate, director of premium seating, and finally, associate director of annual giving during his nine years in Berkeley.

Prior to his time at Cal, he spent one year as a development associate in the Victors Club at the University of Michigan. He played a front-line role in Michigan’s implementation of its preferred seat donation program while also assisting with fundraising for various capital projects on the Michigan athletic campus.

A native of Bessemer, Ala., Parsons graduated from the University of Alabama with a bachelor’s degree in journalism in 2002. He later earned his master’s in sport administration from Belmont University in 2004.

As a senior at Alabama, he served as publications intern for Crimson Tide Sports Marketing. While at Belmont, he served as an events intern for the Nashville Sports Council, working on the staff of the Music City Bowl, NCAA Basketball Tournament and the U.S. Gymnastics National Championships.