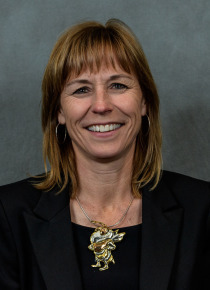 In her first year back on The Flats, she helped enhance Georgia Tech’s student-athlete development initiatives through the implementation of several new programs, including the first-ever Jackets Without Borders service trip to Costa Rica in August 2017. She has also spearheaded the student-athlete two day orientation program which is the leadership academy and Jump Start Jackets that are offered to Tech student-athletes.

Akin rejoined the Georgia Tech athletics administration after 13 years at nearby Agnes Scott College. She served as Agnes Scott’s athletics director and physical education chair for 12 years (2003-15) before being promoted to associate dean for athletics and student activities in February 2015.

During her 12 years as athletics director at Agnes Scott, an NCAA Division III institution in Decatur, Ga., Akin oversaw a program that produced eight NCAA Tournament teams and a coaching staff that earned 12 different coach-of-the-year recognitions. Under her direction, Agnes Scott student-athletes maintained a 3.0 cumulative grade point average and participated extensively in on- and off-campus service projects.

Administratively, she developed a unique revenue-generation model that resulted in a 200-percent increase in the school’s athletics budget and partnered with a national franchise Snap Fitness to bring a state-of-the-art fitness facility to campus at no cost to the college. She also coordinated with the school’s communications department to create the now-trademarked tagline “Smart Women Sweat” to promote the Scotties’ athletics programs.

In addition to her duties as athletics director and physical education chair, Akin was Agnes Scott’s women’s basketball coach from 2003-07 and was named the Great South Athletic Conference Coach of the Year in 2006. She also served as commissioner of the Great South Athletic Conference from 2011-16 and was a member of the NCAA Division III women’s basketball committee and NCAA volleyball regional advisory committee from 2014-16.

Prior to her arrival at Georgia Tech in 1996, Akin also served as a sports marketing assistant at Auburn and NC State and as a member of the women’s basketball staffs at UNC Wilmington and Kansas State.

She and her husband, Charles, have two children: Bobbie and Ryan.