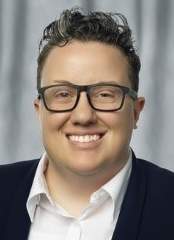 Prior to her arrival at Georgia Tech, Brazelton spent two years at Mercedes-Benz Stadium, where she was a suites guest relations supervisor for two years. She was responsible for daily customer service to 188 suite holders and continual suite sales, as well as assisting with game day operations and managing more than 250 staff members. During her time at MBS, the stadium hosted the College Football Playoff national championship game and Super Bowl LIII, as well the Atlanta United and Atlanta Falcons.

She served as assistant director of development at Kennesaw State University, where she assisted with athletics fundraising, events, communications, graphic design, ticketing and video. She was instrumental in implementing and executing the premium seating spaces for Kennesaw State’s first ever football season and also played a central role in surpassing the $1 million mark in donations and gifts for two consecutive years, including nearly a 20-percent year-over-year increase from 2015-16 to 2016-17.

In 2014-15, Brazelton was a Deacon Club intern while pursuing a master’s degree at Wake Forest. In that role, she assisted with the annual fund, stewardship and gameday operations under the leadership of Barry Faircloth, who was named the 2015 NAADD Fundraiser of the Year. During her time with the Deacon Club, total fiscal giving surpassed $48 million, representing a 216 percent year-over-year increase.

Brazelton began her professional career in the summer of 2012 as an intern for UNC Asheville women’s basketball before being promoted to director of basketball operations that fall. Brazelton oversaw travel, gameday operations, sports information, camp, film and assisted head coach Brenda Mock Kirkpatrick with all scheduling and administrative duties.

A women’s tennis student-athlete at Western Carolina, Brazelton graduated from WCU in 2012 with a B.S. in sport management. She earned a master’s degree in education in intercollegiate athletic leadership from the University of Washington in 2015.