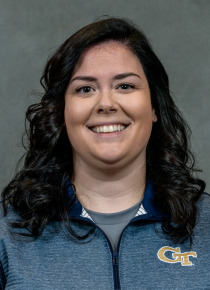 Brittany Ferrell rejoined the Georgia Tech sports medicine staff as an athletic trainer in Fall 2017, working with the softball team.

Prior to her return to The Flats, Ferrell spent two years as an assistant athletic trainer at Ole Miss from 2015-17, where she worked primarily with softball and served as the medical director for the 2017 NCAA Softball Tournament – Oxfford Regional.

Brittany also served a stint at the University of Miami for the 2013-2015 seasons, working with the volleyball and men’s tennis programs.

Ferrell first came to The Flats as a Graduate Assistant Athletic Trainer from 2011-2013. During that time she was responsible for softball and football coverage.

Ferrell is a board certified athletic trainer by the National Athletic Trainers’ Association and has certification in CPR/AED.