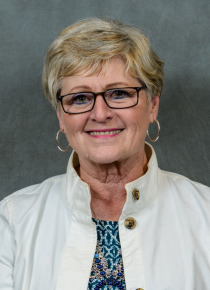 Barb Dockweiler is the associate director for development and stewardship with the Alexander-Tharpe Fund. She has been with the A-T Fund for more than 25 years.

She first began her career with the A-T Fund in October 1988 as a receptionist. She later moved up to office manager, then to director for special events before moving to her current role.

She has four children – three sons and one daughter – and seven grandchildren – five grandsons and two granddaughters.