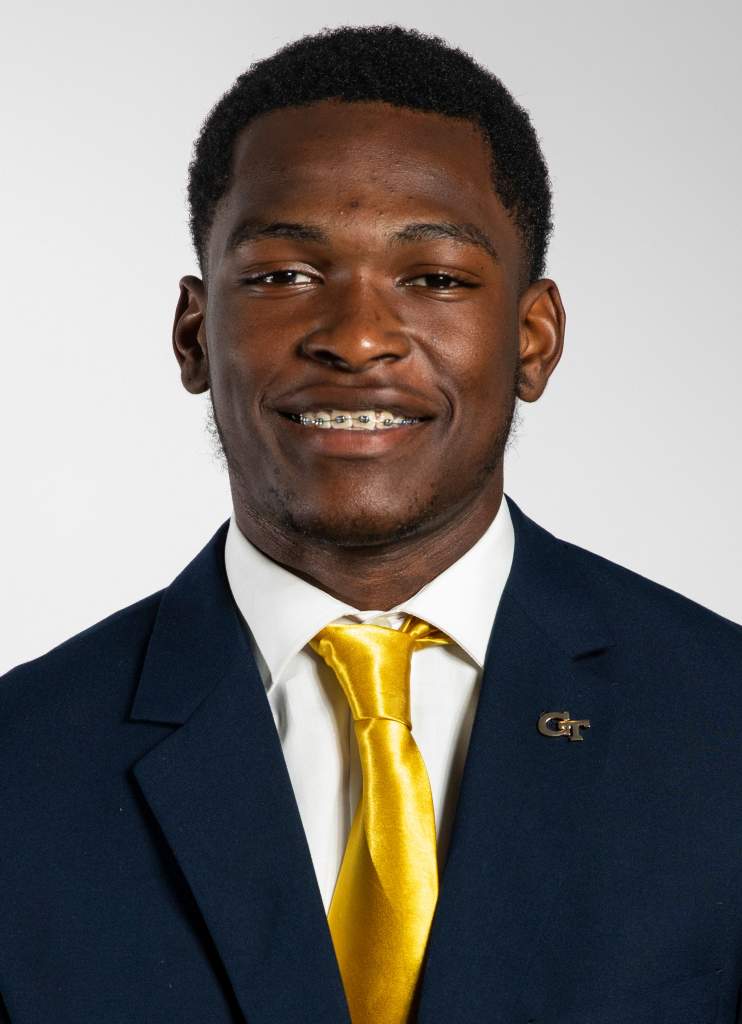 2018 (Sophomore): Saw action in all 13 games and made seven starts at running back … Finished fourth on the team (second among running backs) with 564 rushing yards and five touchdowns … Also caught four passes for 50 yards, both tops among Georgia Tech running backs … Started the season slowly with just eight yards on four carries over the first two games of the season (Sept. 1 vs. Alcorn State and Sept. 8 at USF) … Had a breakout game with 82 yards on just eight carries – including a 42-yarder – at Pitt (Sept. 15) … Scored touchdowns in four-straight games – Bowling Green (Sept. 29), Louisville (Oct. 5), Duke (Oct. 13) and Virginia Tech (Oct. 25) … Ran for 58 yards on eight carries in rout at Louisville … Amassed 78 yards (62 rushing, 16 receiving) on 13 touches (12 rushes, one reception) vs. Duke … Helped lead Georgia Tech to big win at Virginia Tech with 76 yards on 12 carries … Ran for a career-high 90 yards on just 10 carries and also hauled in a career-long 18-yard reception in win at North Carolina (Nov. 3) … Scored fifth touchdown of the season on a three-yard run during Georgia Tech’s overtime win over Virginia (Nov. 17) … Ran for 39 yards and caught a 15-yard pass at Georgia (Nov. 24).

2017 (True Freshman): Saw action in nine games as a true freshman … Ranked sixth on the team and second among Georgia Tech’s B-backs with 175 rushing yards … Two rushing touchdowns were good for a tie for third on the team behind only Tech’s two 1,000-yard rushers – QB TaQuon Marshall and BB KirVonte Benson … After not playing in the season opener against Tennessee (Sept. 4), Howard ran for 82 yards on six carries (both season highs) in home opener versus Jacksonville State (Sept. 9) … 82 yards against JSU included a season-long 65-yard touchdown run on just the second carry of his career … Went on to record multiple carries in five of the next six games, missing only a one-point loss at nationally ranked Miami (Oct. 14) due to injury … Scored his second touchdown of the season on a two-yard run in the second quarter of a 38-24 win over Wake Forest (Oct. 21) … Did not have any rushing yards over the final three games of the season but did serve as a kick returner in final two games against Duke (Nov. 18) and Georgia (Nov. 25) … Returned four kickoffs for a total of 64 yards (16.0 avg.) … Had a long return of 20 yards against UGA … Was one of nine true freshmen that saw action for the Yellow Jackets.

High School: Rated as a three-star prospect by ESPN, 247Sports and Rivals … Three-time all-state and all-region honoree … Four-time all-area selection … Amassed 4,451 all-purpose yards (3,352 rushing, 1,099 receiving) and 53 touchdowns (41 rushing, 12 receiving) in 39 high-school games … Rushed for 1,053 yards (6.9-yard average) and 15 touchdowns and caught a team-high 49 passes for 402 yards and three scores as a senior … Helped lead Northwestern to four-straight district and regional titles and 2015 state championship … Four-year letterwinner and three-year captain … Set school records for rushing yards in a game and all-purpose yards in a career … Coached by David Pierce … Selected to participate in the prestigious Shrine Bowl of the Carolinas … Also lettered four times in wrestling and track and field (three-year captain in wrestling, one-year captain in track) … Honors student.

Personal: One of three siblings … Started playing football when he was 8 … Majoring in business administration.