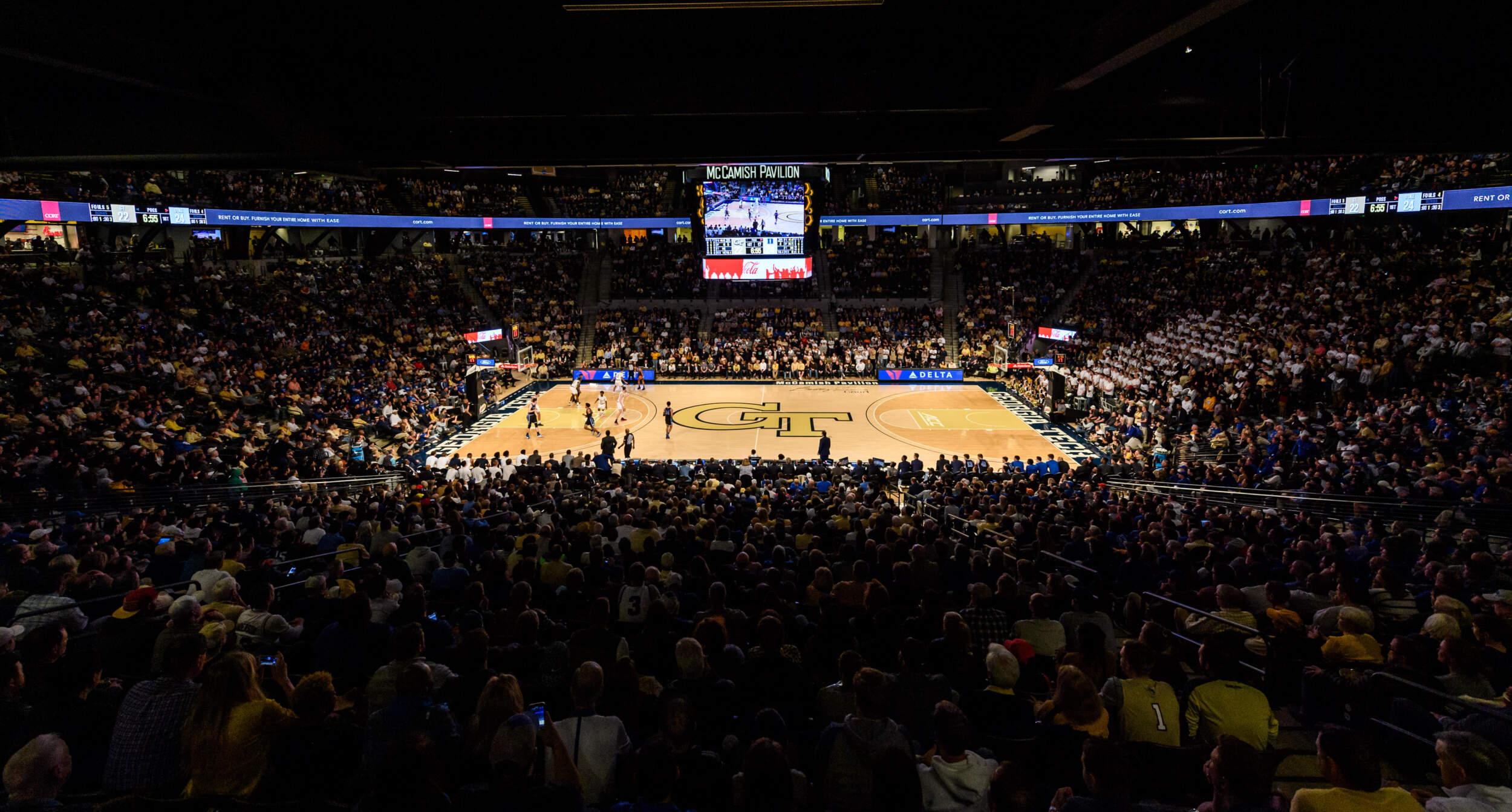 The dawning of a new era in Yellow Jackets’ basketball was marked by the opening of McCamish Pavilion in November of 2012.

Occupying the same footprint on the corner of 10th and Fowler Streets as the historic Alexander Memorial Coliseum, which hosted Tech basketball games for 55 years and saw the Yellow Jackets post a record of 556-194, McCamish Pavilion opened its doors Nov. 9, 2012 when the Tech men hosted Tulane.

McCamish Pavilion has drawn raves from friend and foe alike, from its state-of-the-art audio-visual technology to the cozy and intimate, but loud atmosphere.

The arena is named for the late Hank McCamish, a long-time insurance executive in the Atlanta area whose family provided the lead gift for the $50 million facility. The arena footprint expanded approximately 30,000 square feet over that of Alexander Memorial Coliseum, and the former circular seating bowl was demolished and replaced with a rectangular bowl along with an upper deck.

The most obvious difference is that the walls separating the concourse and the bowl were removed, meaning that the floor is visible from almost every point in the concourse. The familiar domed roof and the 32 steel support beams remain, but the McCamish interior looks nothing like the old Thrillerdome.

Ground was broken for the construction of Tech’s new on-campus arena on May 5, 2011, and 18 months later, the Yellow Jackets had a state-of-the-art building with 8,600 seats and a luxurious club area, which provides a cozy view of the court. The lower level seating bowl has 6,935 seats, and the new balcony level seating has 1,665 seats. 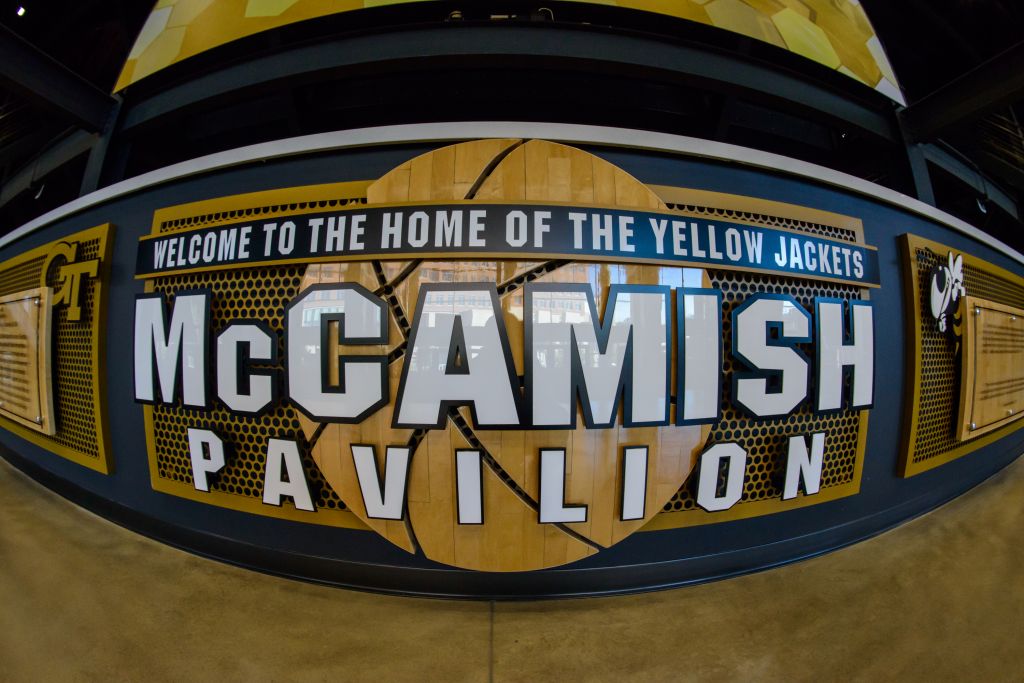 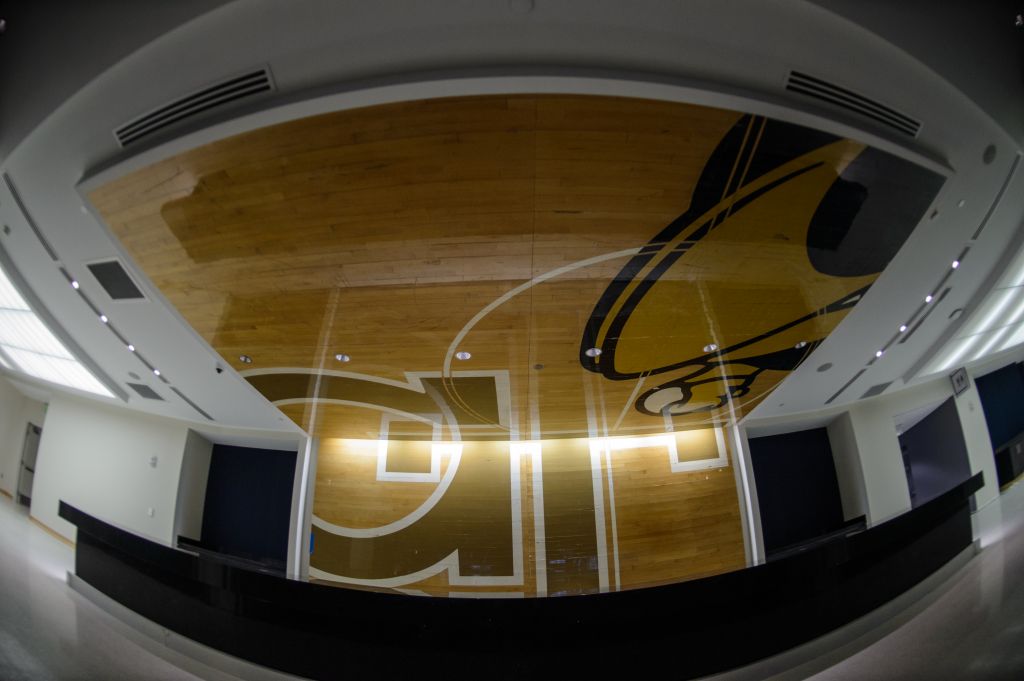 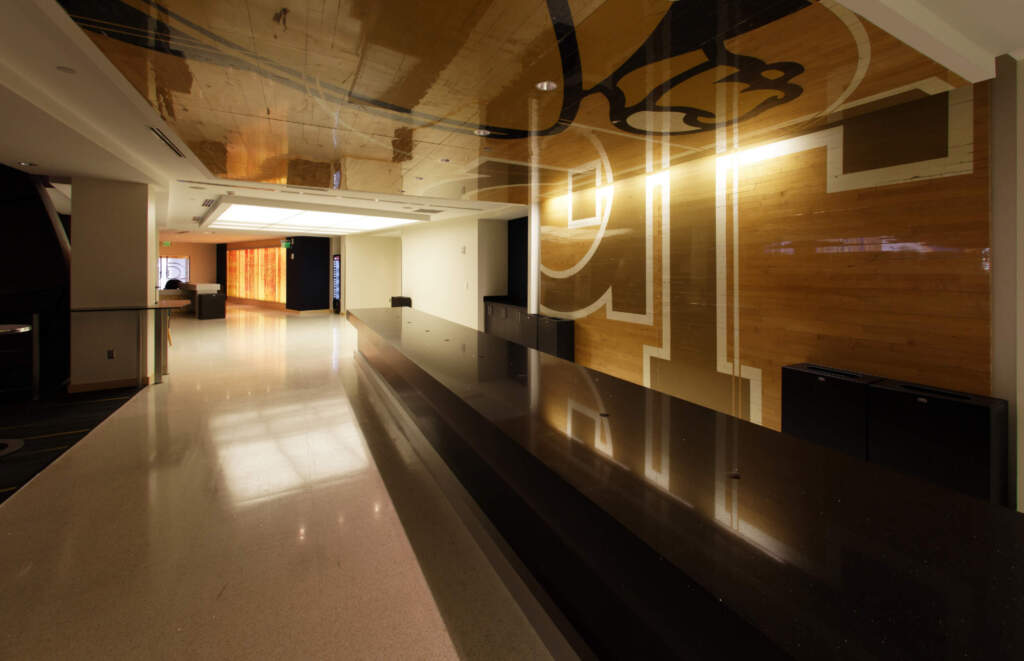 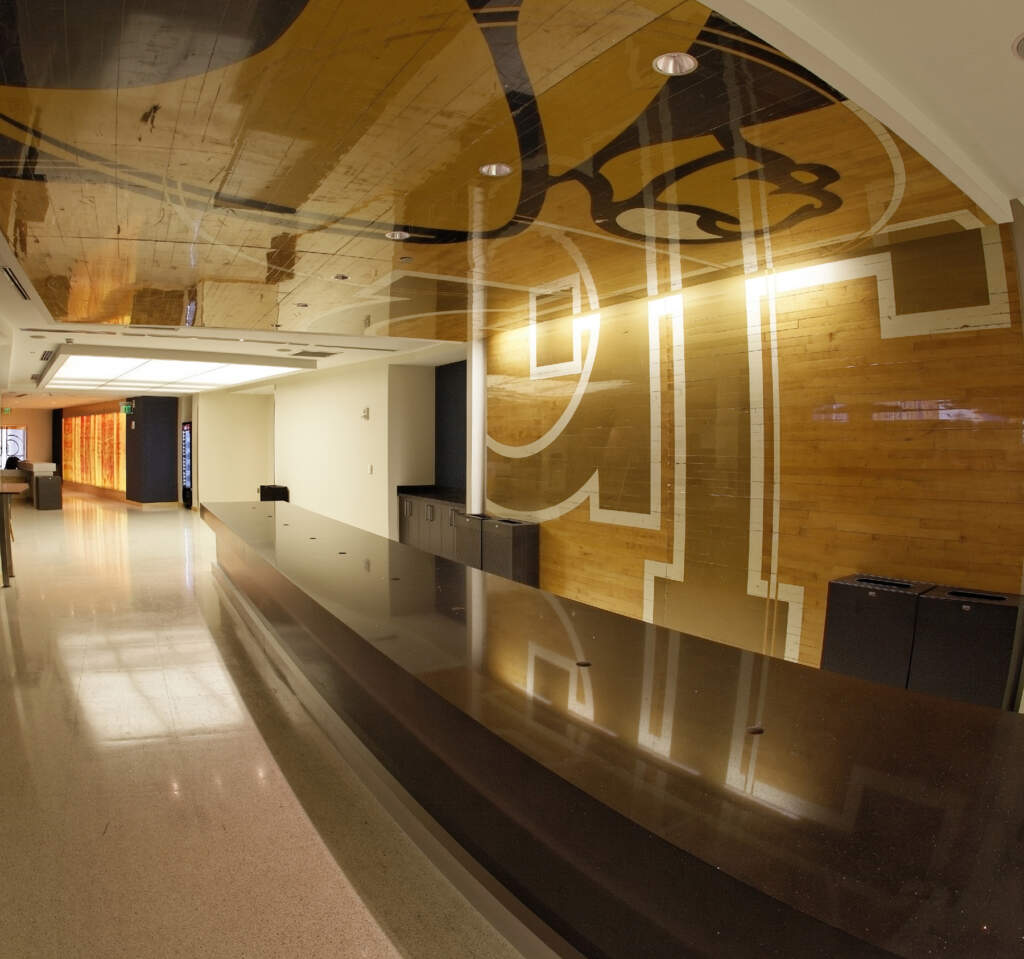 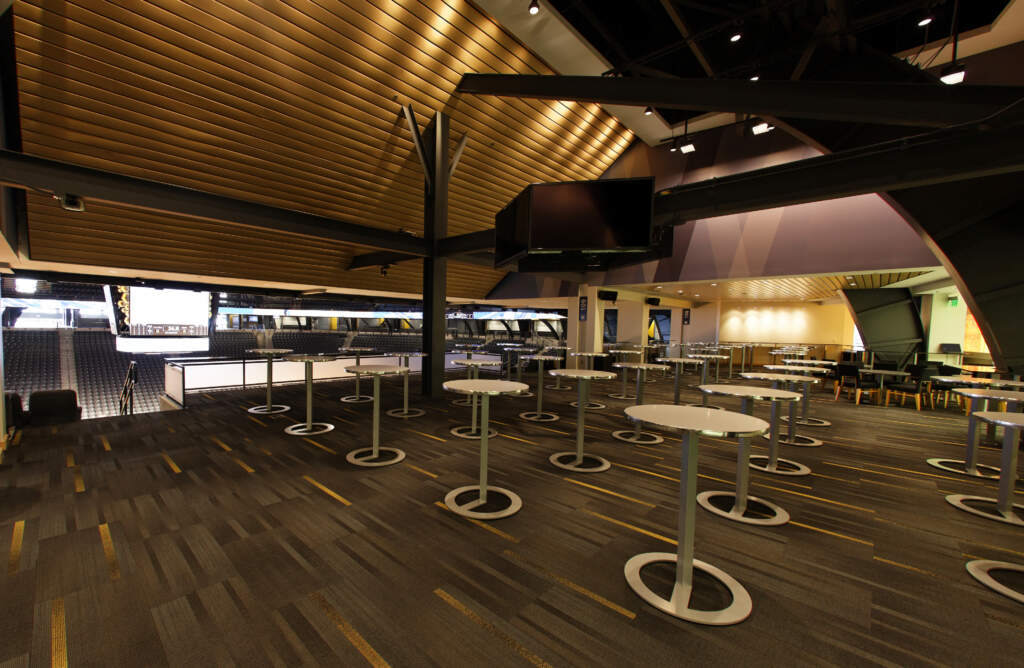 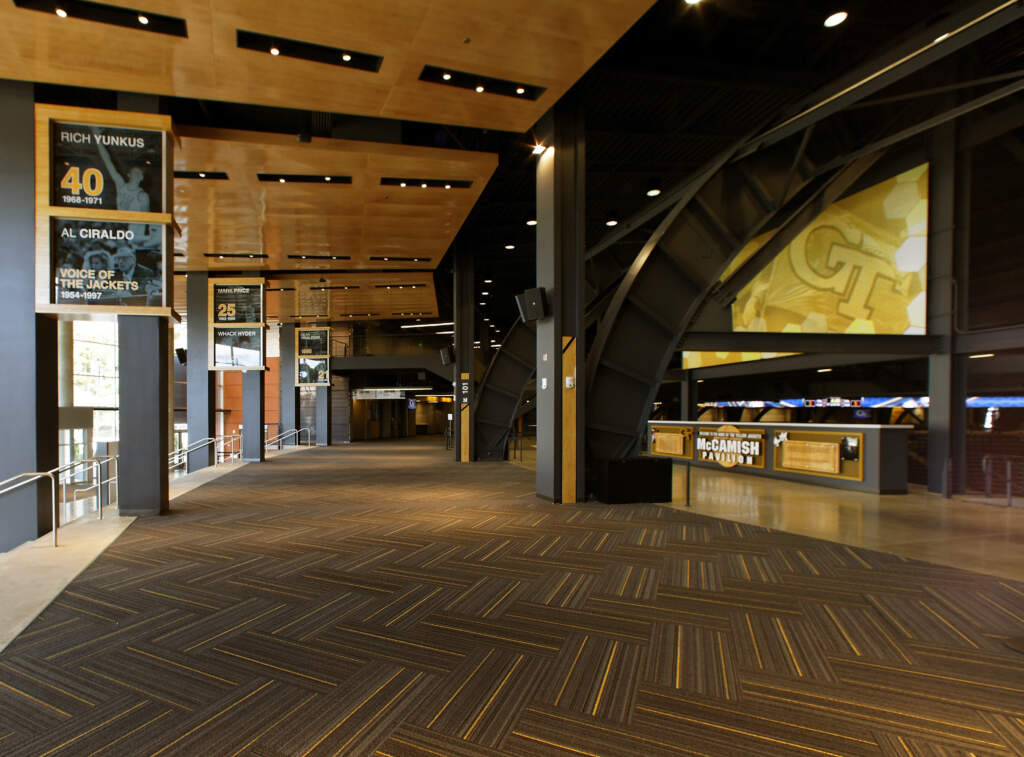 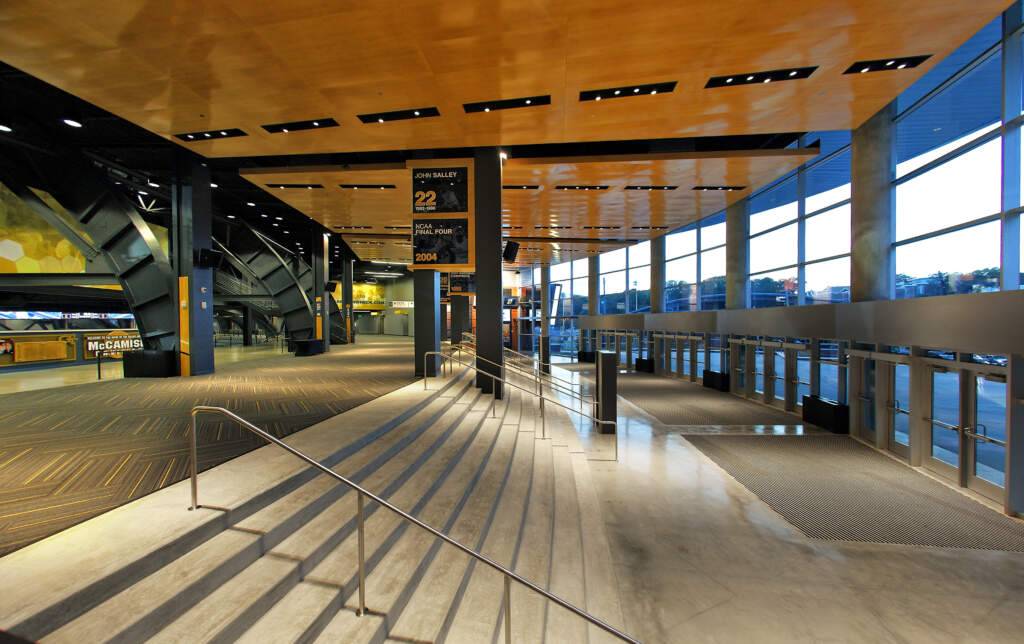 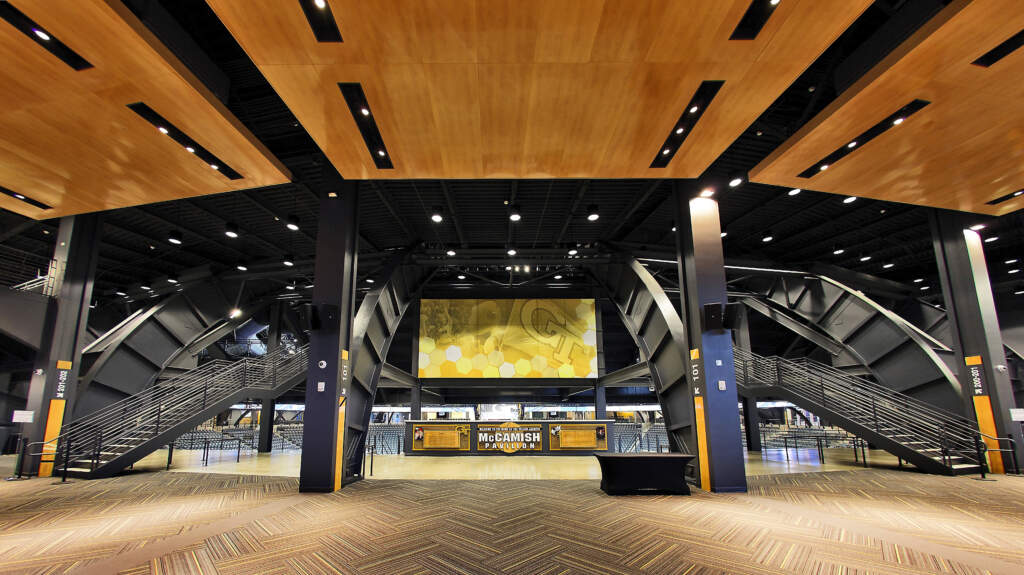 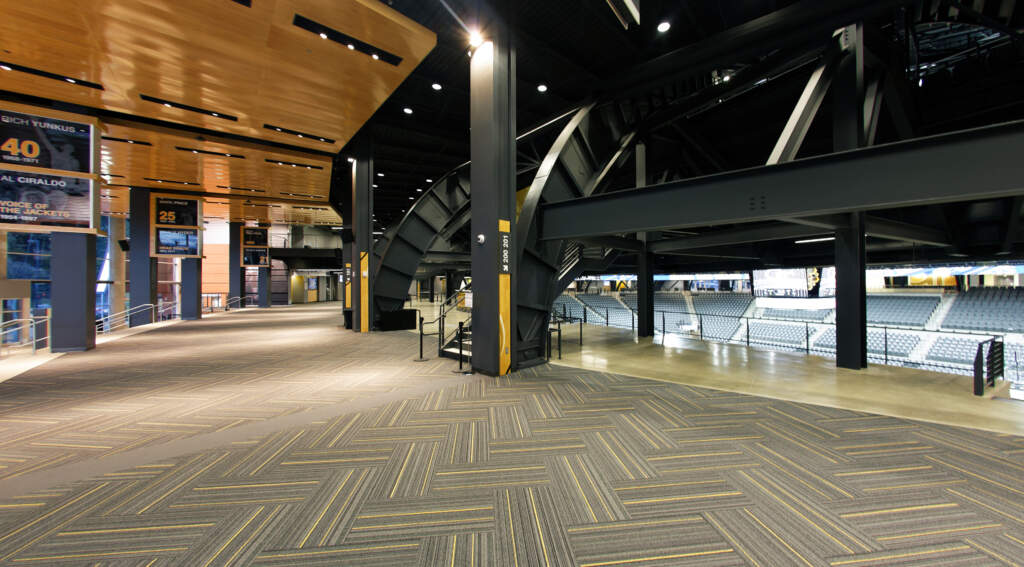 Spectators can view the game as they walk to and from concessions and rest rooms, which are all located on the outside of the concourse. The balcony level seating has its own concourses with rest rooms and concessions.

The building features a center-hung scoreboard, with video screens on four sides and a circular message board underneath. The balcony level facing has a 360-degree ribbon board for messaging and graphics.

The lighting system, similar to those at Madison Square Garden and Staples Center in Los Angeles, will illuminate the court while leaving the stands darkened, creating a theatre-like feel to games.

Nearly the entire structure was built new, with the one notable exception being the familiar dome of Alexander Memorial Coliseum and its 32 steel ribs, which stayed in place and provided the skeleton for the new structure. A new roof was installed, and the ribs and the ceiling were re-painted. Around the concourses, pieces of the former AMC court were inlaid into the ribs.

A courtyard was created outside the West entrance to honor William Alexander, the legendary Tech football coach and director of athletics who led the drive to build Alexander Memorial Coliseum in the 1950s.

The court remains named for legendary basketball coach Bobby Cremins, who led the Tech men’s team from 1981-2000 and compiled a record of 354-237 with three Atlantic Coast Conference championships and 10 NCAA Tournament appearances in 19 seasons. 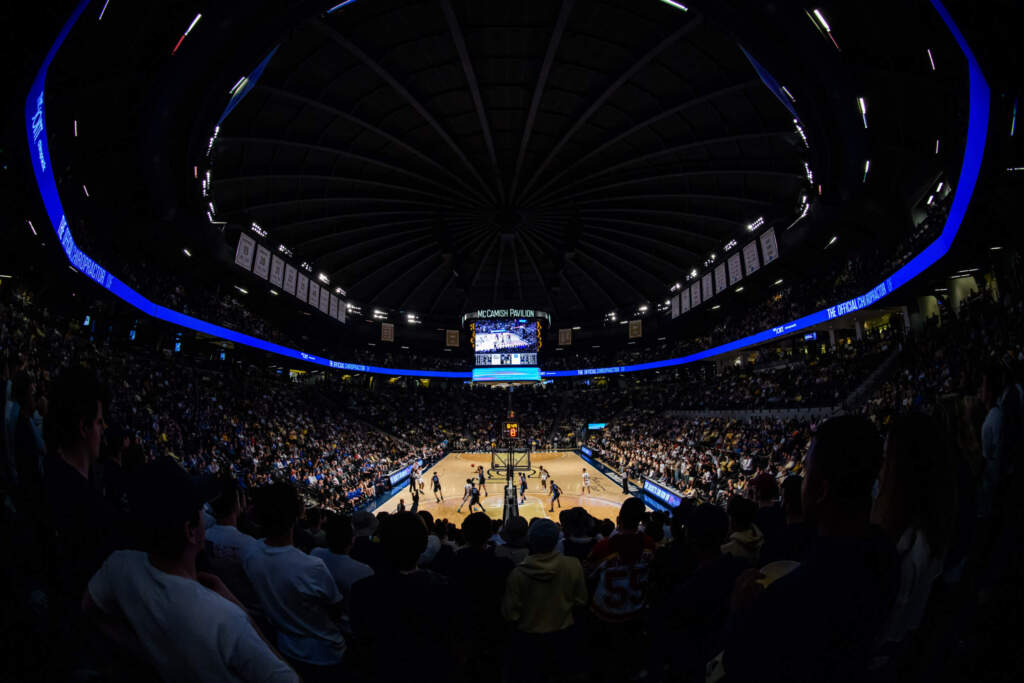 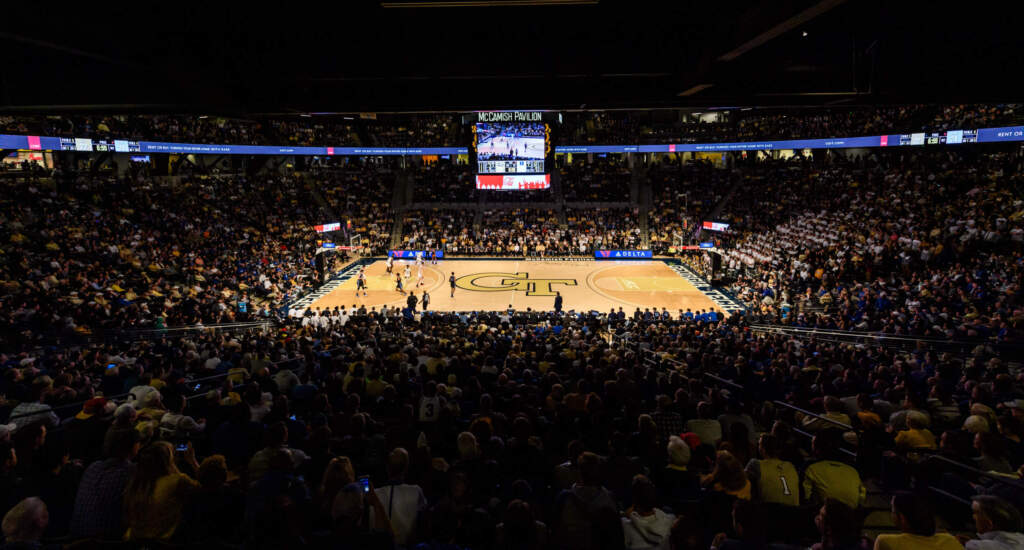 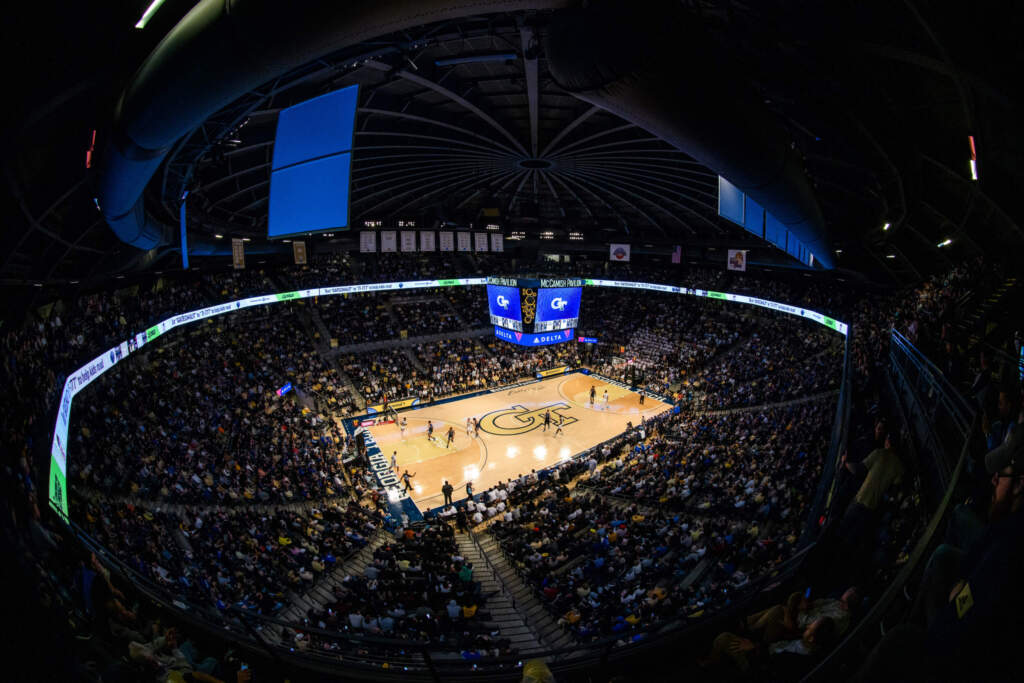 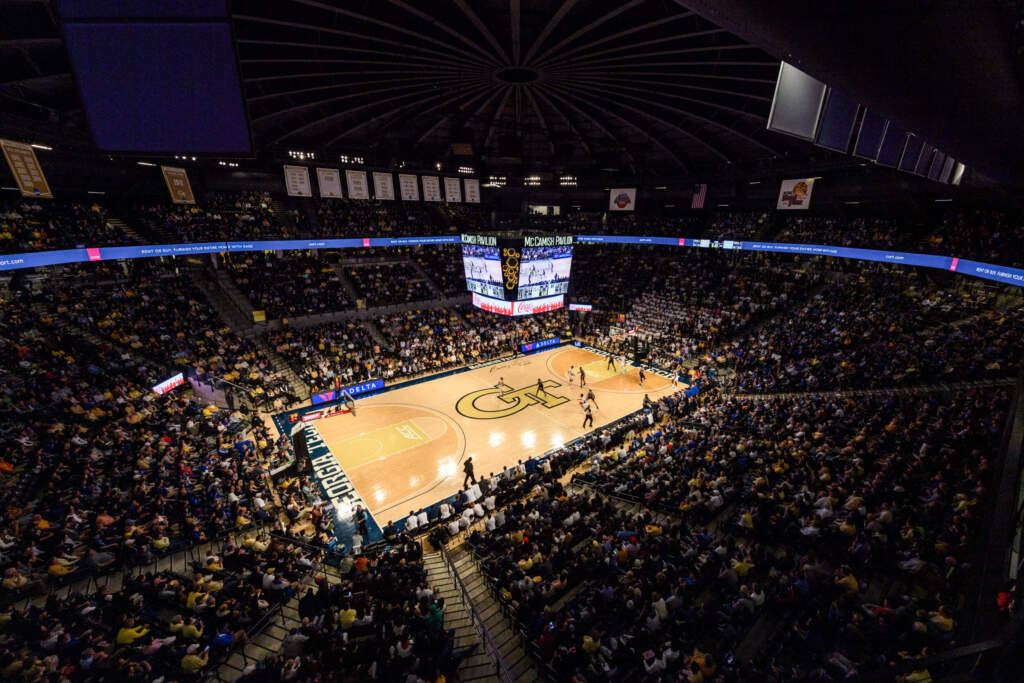 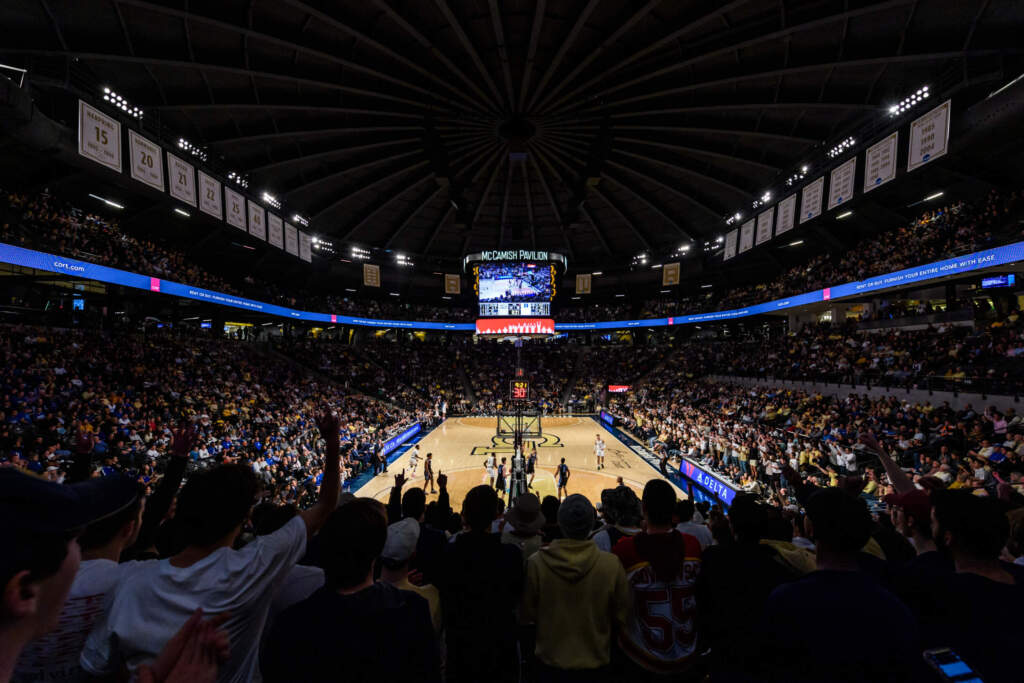 McCamish Pavilion was the first project in what became a major transformation of the Fowler Street entrance to the Georgia Tech campus, including the Yellow Jackets’ new tennis facility, the Ken Byers Tennis Complex, which opened in January of 2013, the Shirley Mewborn Softball Field and the John and Mary Brock Indoor Football Facility.

Designed by the renowned architectural firm Populous and built under the direction of Whiting-Turner Contracting Company, the arena already has been recognized by the American Institute of Architects of Atlanta for its significant architectural impact on the city’s landscape along with such structures as the Sovereign building, TWELVE Centennial Park Tower I, The Atlantic, Loews Midtown, the Atlanta Botanical Garden Hardin Visitor Center, the Georgia Tech Human Research Building rehabilitation, the Martin Luther King, Jr., Federal Building and the Ray Charles Performing Arts Center.

The Atlanta Business Chronicle noted, “The McCamish Pavilion renovation is an example of a project that respects the history of a structure, while making it more functional now and for the future.”

“This renovation expands the arena while preserving the character of the original design by a significant Atlanta architect,” said Jay Silverman, senior associate of Lord, Aeck & Sargent, Inc., and president of the American Institute of Architects of Atlanta. “It also responds to the character of a growing Georgia Tech campus.” 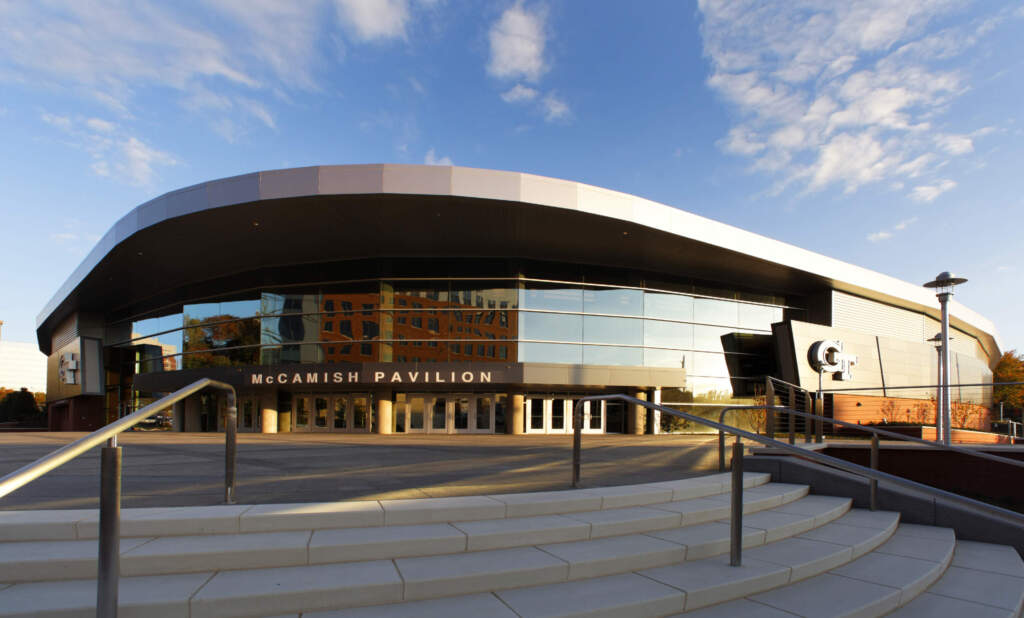 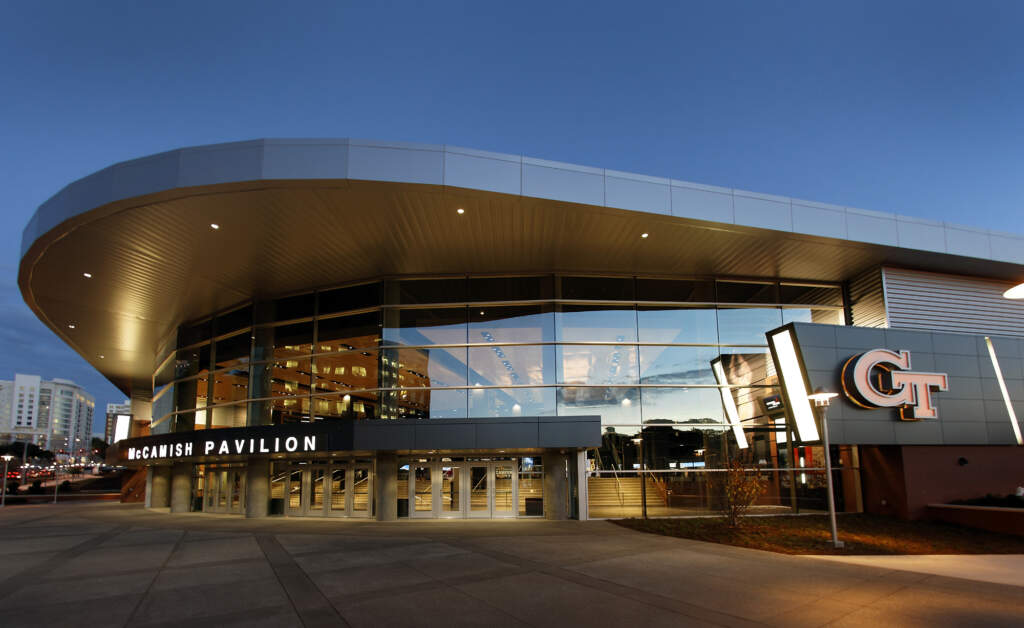 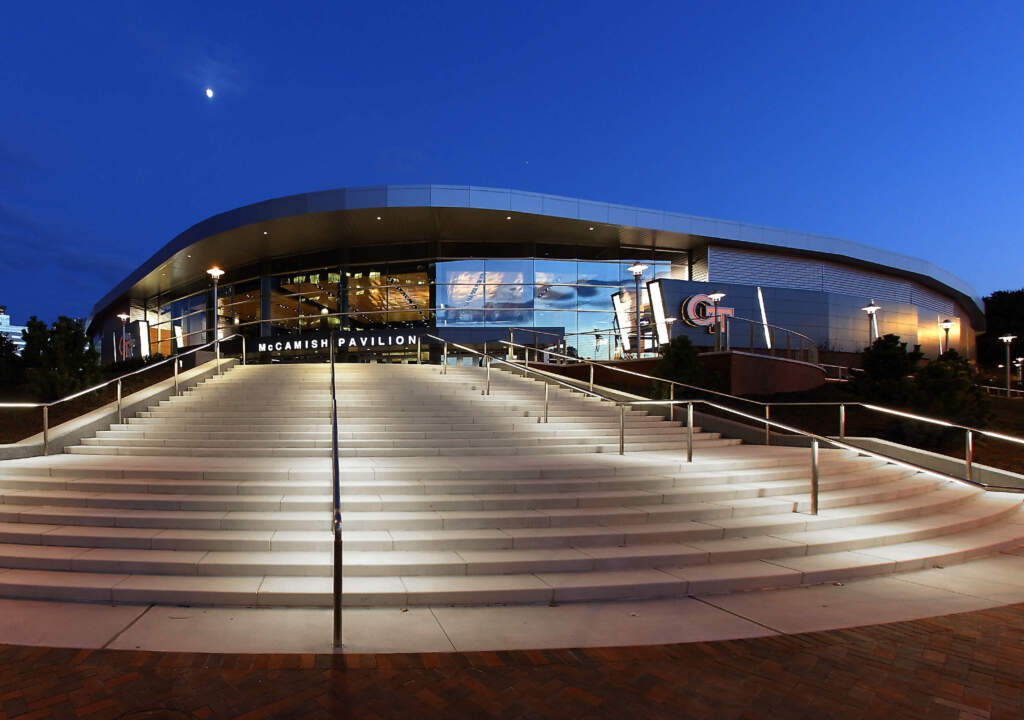 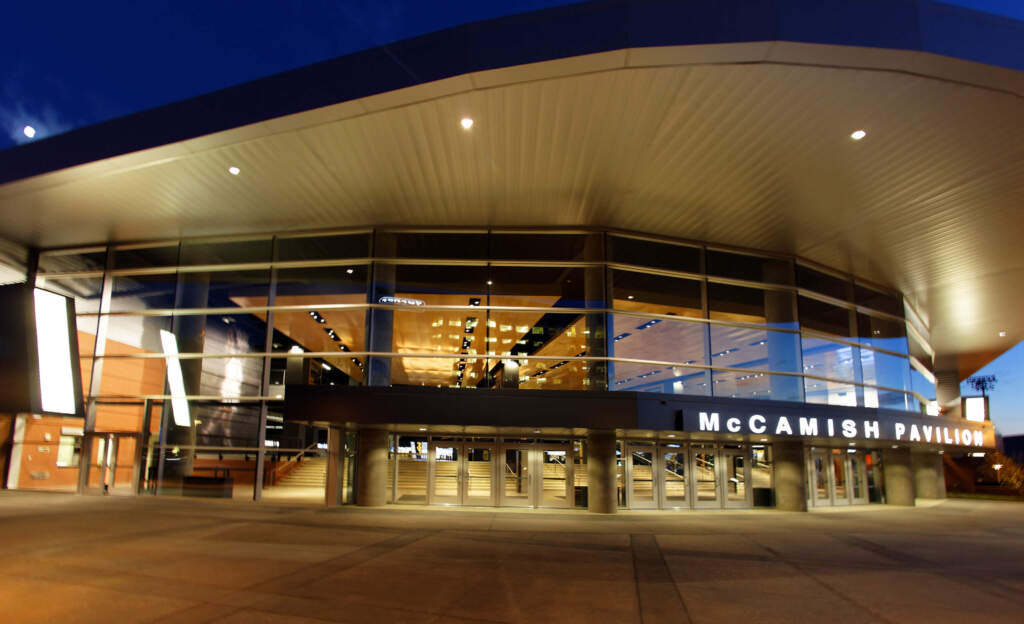 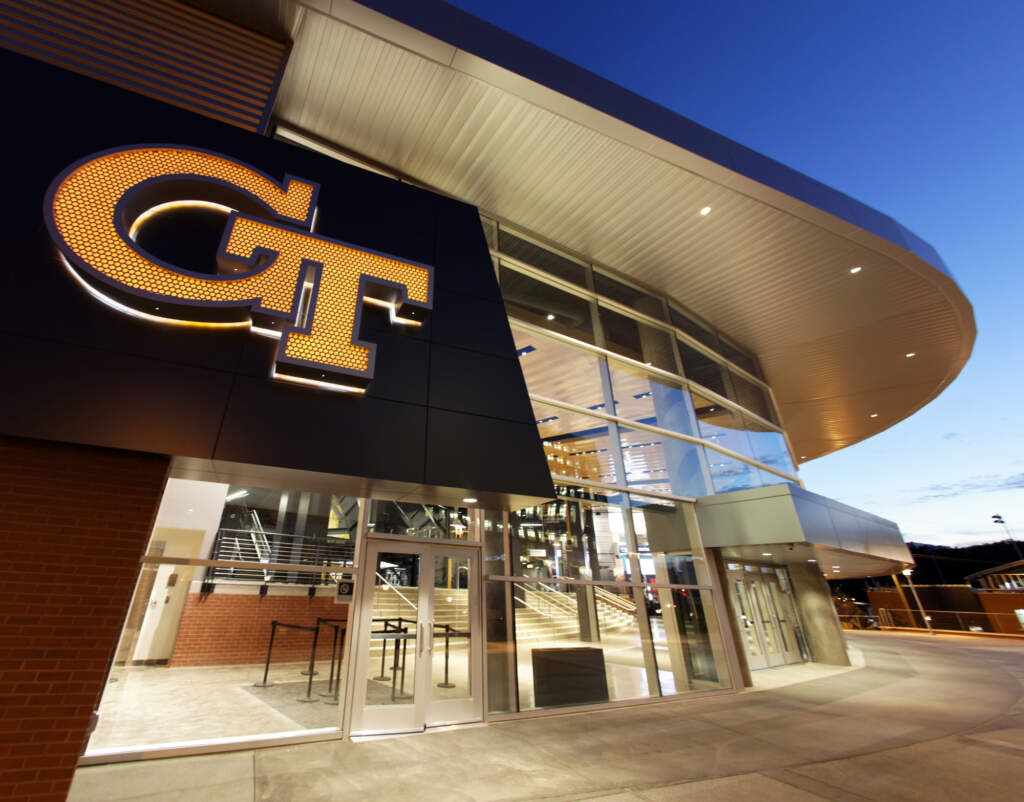 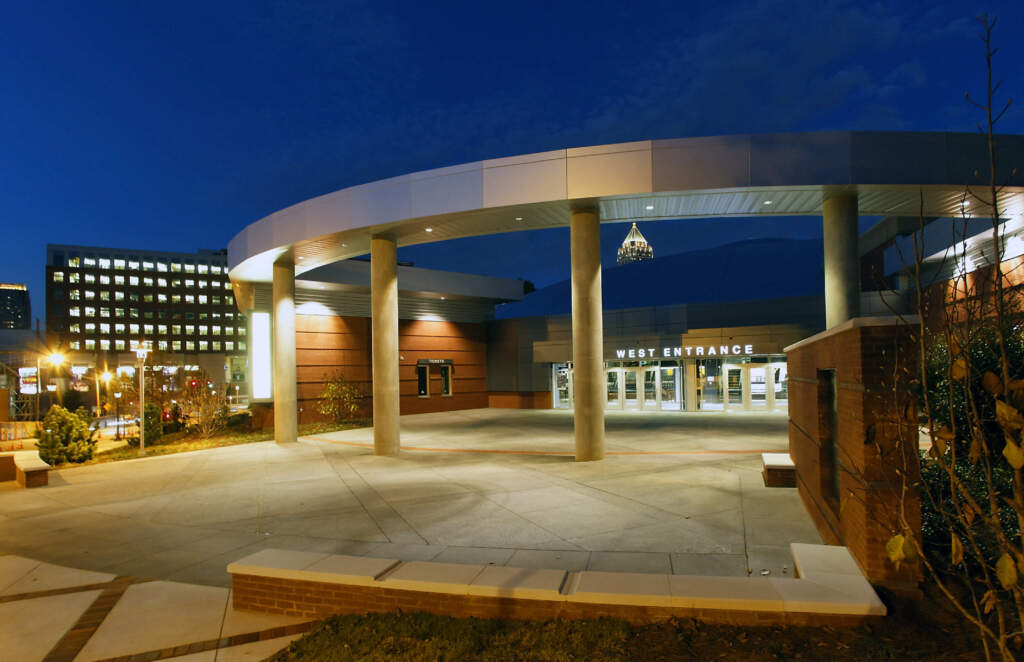