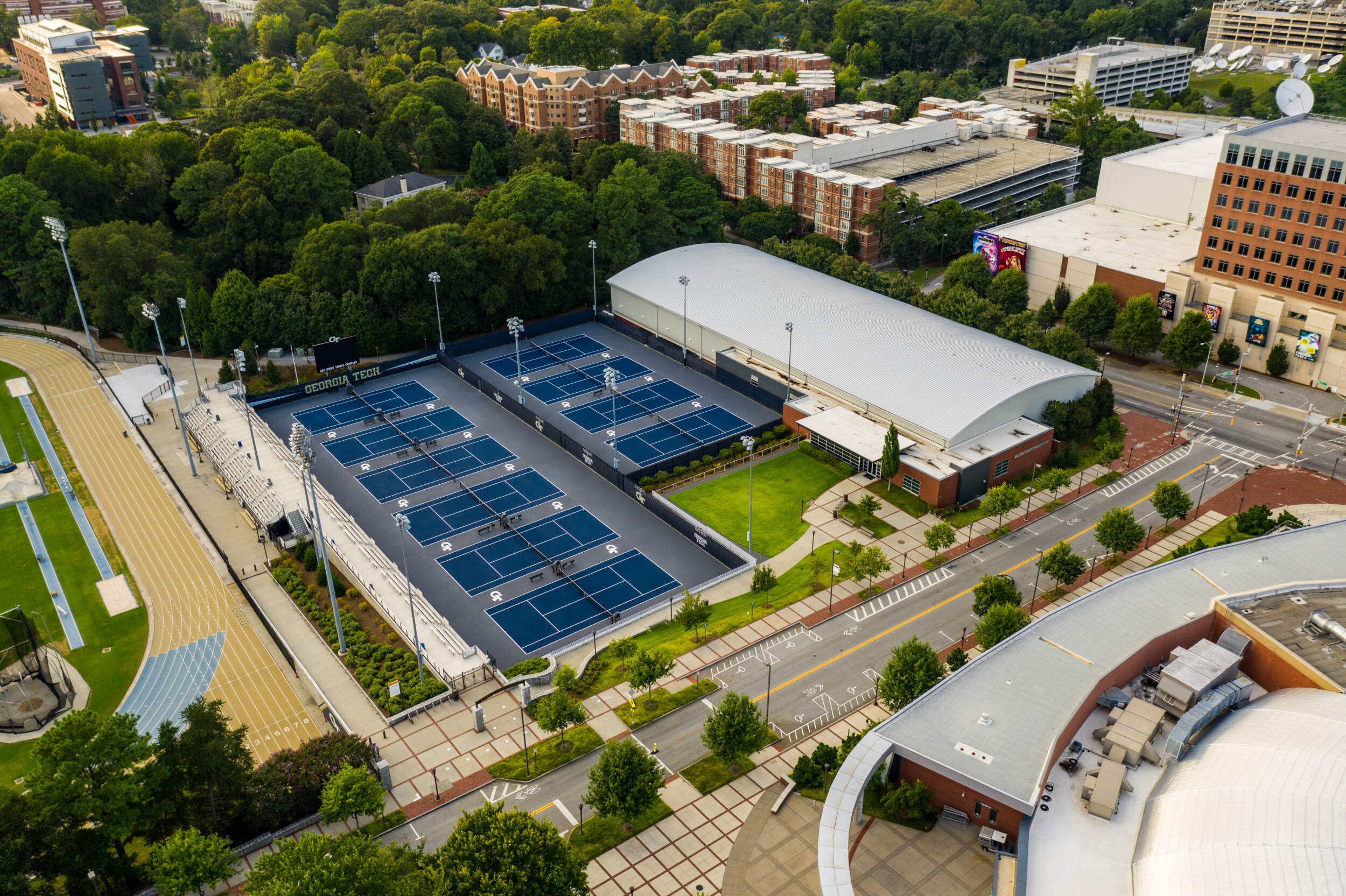 KEN BYERS TENNIS COMPLEX
A lot of history was made in the Bill Moore Tennis Center. Some of the greatest players in Georgia Tech history took to those courts and improved their games to the point they could reach the pro tour.

Current Georgia Tech men’s tennis head coach Kenny Thorne is one of those. He played AND coached there in his four decorated years on the Flats (1985-89).

In January 2013, Thorne witnessed the opening of the Ken Byers Tennis Complex, as the women’s tennis team opened the facility with a match against Syracuse and men’s team opened a day later against Old Dominion. In a way, it was deja vu for Thorne, who was a freshman the year the Moore Center opened. 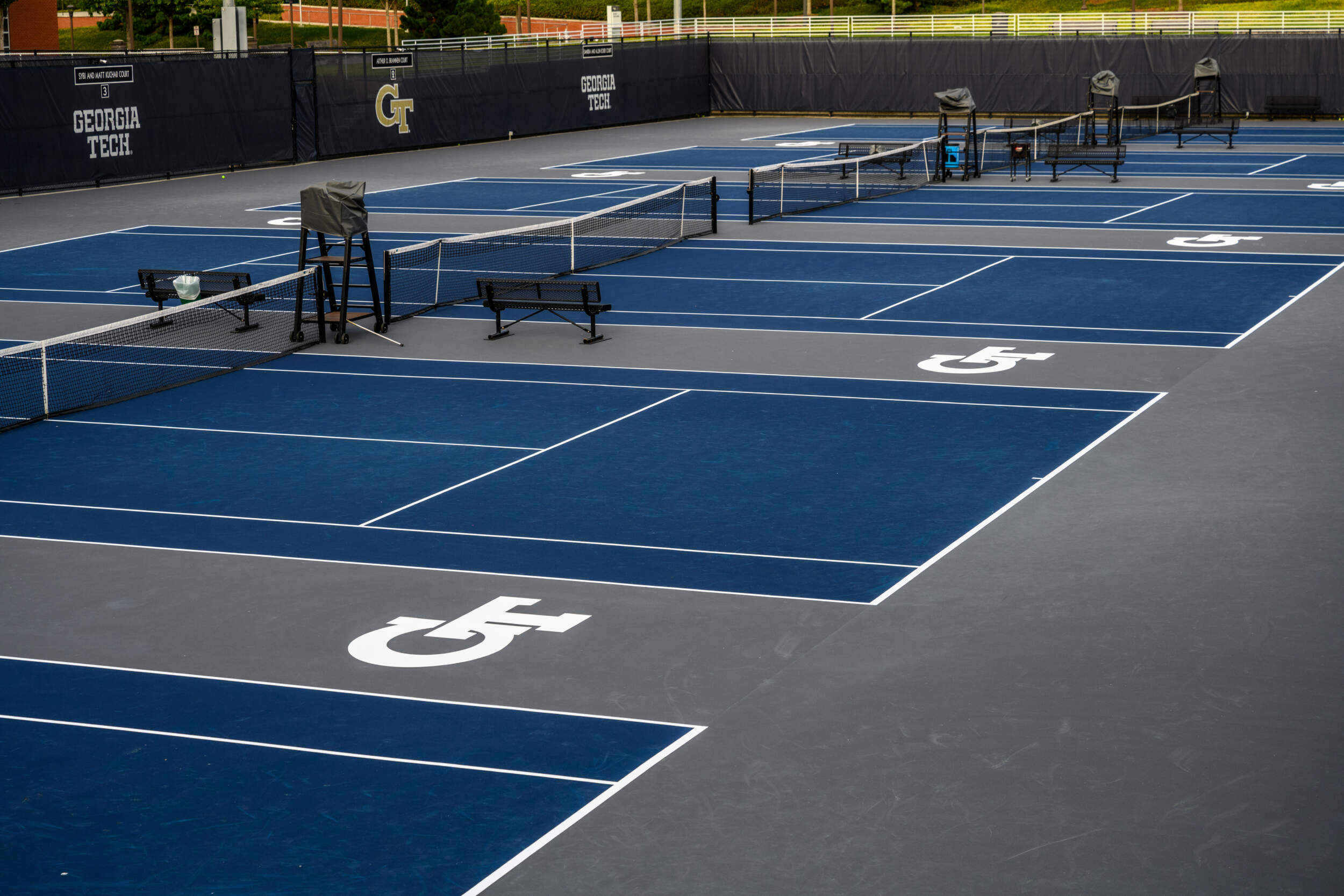 “It’s just a very unique thing. It’s an honor to be coaching here at this time, and it’s an honor for all of our student-athletes to have opened a new facility,” said the 1989 graduate and 1995 Georgia Tech Sports Hall of Fame inductee. “That doesn’t happen too often in any sport. It’s very exciting.”

Women’s head coach Rodney Harmon, whose team played the first matches on the brand new six-court facility, who was beginning his first season on the Flats, has been around the sport long enough to know something special when he sees it. He’s seen it with the Byers Complex.

Ground was broken for the facility on June 15, 2012, and was made possible by a generous gift from alumnus Ken Byers (class of `66) and his wife, Trish.

“It’s beautiful and it’s going to help both our men’s and women’s programs stay a factor with the other schools, in our very, very tough conference,” said Harmon, who has been in tennis player development for more than 25 years and, as a pro, reached the quarterfinals at the 1982 U.S. Open. “It has a great feeling, which I think will help us set up a home-court advantage because a lot of our fans tend to be very vocal and really support our team.”

As advantageous to the team is the amount of space. Off the court, Byers has bigger locker rooms, a lounge, a training facility and more office space for the coaching staffs. The number of available courts for play inside doubled from three to six.

“I think it’s going to be big for us,” Harmon said. “It allows us to compete year-round, and when the weather gets inclement, both teams have a place to play. We’ve always had to play outside, and it can get pretty cold sometimes. Now we’re going to be able to play indoors and really get prepared for the indoor season, which starts in February.”

The doubling of the court space was a key factor in building the new complex.

“You need space and you need quality space and if that means new or renovations then so be it,” said former associate athletic director Paul Griffin. “Now, we have an efficient way of running our indoor matches, and because of the weather you wind up playing almost half of your matches indoors be it for wet or for cold.”

Thorne and Harmon agree that the opening of the Byers Complex signaled the start of big things ahead. Thorne compared the anticipation of the facility’s opening to the buzz surrounding the opening of McCamish Pavilion and expects Tech tennis fans to be as energized as basketball fans.

“It’s such a big change and ours is a total change,” said Thorne. “It’s a whole brand-new complex. There are some really exciting things happening. So hopefully it’s going to draw a lot more people out. They come see the facility as well as some great tennis.”

Harmon expects the facility to also draw some big-name recruits.

“It gives us an opportunity to recruit top-level athletes because now a lot of the top schools have new facilities around the country, whether it’s Alabama or Florida State or South Carolina, Texas is getting a new facility built,” he said. “So now we have a new facility. It’s something that to our recruits that makes us a lot stronger.”

The Byers Complex, built on the same footprint where the Moore Center stood, is light years ahead of its predecessor and was overdue as far as keeping Tech’s programs current. The ingenuity in building a facility that could fit so much more into the same space as its predecessor made this project design uniquely Tech.

The outdoor part of the complex consists of six competition courts on the south end of the site and four practice courts located between the indoor facility and the competition courts. A landscaped courtyard area was added between the practice courts and Fowler Street. Outdoor seating, situated between the Griffin Track and the completion courts, provides a view of both competition on the track and action on the tennis courts and includes plenty of space for wheelchair seating. Additionally, an East-West Connector provides a lighted walkway for pedestrians along the track-side of the site to facilitate movement between the North Campus Parking Deck and the McCamish Pavilion.

“Thirty years is a long time,” said Griffin. “It’s not a matter of different inclusions. It’s a matter of improved space. It’s a tight footprint. The real estate didn’t change, so we had to make some compromises on that and one of the other things was to relocate the indoor facility to the 10th street side of the real estate because it will serve as a buffer from the noise and street from 10th street for the outdoor courts that wasn’t there before. So there are a lot of those kinds of features that are now a benefit for the program.”

“It has a bunch of other features that are assets to the Institute and to athletics in other ways than just tennis,” he added. “There’s a seating area for track, a pathway from the parking lot to McCamish Pavilion (Tech’s basketball arena across Fowler Street), a parking lot on Atlantic to McCamish, improved sidewalks and streetscapes. So it’s a very comprehensive project.”

For the school, it’s the latest improvement to the campus’ Fowler Street entrance, which also includes Mewborn Softball Field and the Brock Indoor Football Facility.

That exciting plan will continue to evolve in years to come. The tennis teams are thrilled to be part of it and are eager to do their part to stir up excitement around campus as they begin spring play.

“It is a tremendous commitment.” said Harmon. “That whole side of campus, with the new basketball arena, with the tennis facility, with the track and the indoor football complex and baseball and softball, it’s now a great corner of campus.”