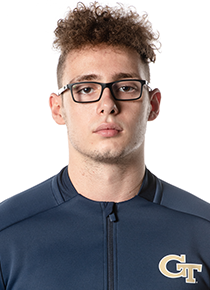 High School: Swam for Hamilton Aquatics Dubai under head coach Ash Morris… In 2017 he represented Ireland at the European Youth Olympic Festival in Győr, Hungary, where he was a semi-finalist in the 100 back… Overall McNicholl has won two silver medals and two bronze medals at Irish Senior Nationals… Set the Irish Junior Record in the 50 Meter LCM Fly at the Irish Open in April of 2018… Earned the Irish Junior Record in the 4 x 100 Medley at the European Junior Championships in Kazan in July of 2019… Set 40 Swim Club records over eight years… Was a member of the three-man contingent from Hamilton Aquatics that won Top Club at 2014 British Age Group Championships.

Personal: Has one brother… Picked Tech because of the team culture and mindset of the staff and students… Enjoys reading and DJ/EDM music mixing.