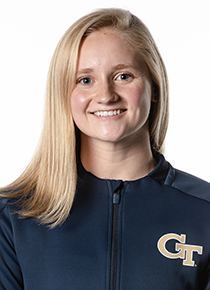 High School: Main events are butterfly and individual medley … A four-year letterwinner and one-year captain at Page under Nicole Krasowski, competing in the butterfly, IM and breaststroke events … Helped lead Page to conference and regional championships in 2017-18 … Earned Most Valuable Performer honors every year in both high school and club since her freshman year … Named a USA Swimming Scholastic All-American in 2017 and 2018 … Garnered YMCA National Swimming All-America honors every year from 2015-19 … Named her conference’s Swimmer of the Year in 2017 and 2018 … Lauded by the Greensboro News & Record as the Female All-Area Swimmer of the Year in 2017 … Swam the 10th-fastest 200 SCY free relay time in the 15-16 age group in 2018 … Finished fourth in the 200 LCM fly event in 2018 with multiple top-16 finishes … Earned the 2018 State Championship in the 200 LCM fly … Holds multiple record in the butterfly, breaststroke and IM events in her high school, club and summer league swim teams … Also ran cross country for a season.