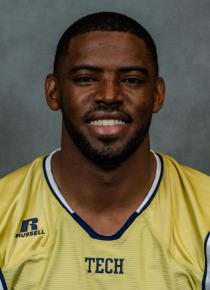 2017 (Senior): Played in all 11 games, including nine starts at defensive end, bringing his career totals to 50 games played and 45 starts … Served as a team co-captain … Tied for fourth on the team with three tackles for loss … Recorded a season-high four tackles in three different games — Tennessee (Sept. 4), Pitt (Sept. 23) and Duke (Nov. 18) … Also had two tackles for loss in win over Pitt and one in loss at Duke … Was one of 20 semifinalist for the 2017 Jason Witten Man of the Year Award, which honors college football’s top leader, and the 2018 Coach Wooden Citizenship Cup, which is presented to a distinguished athlete in any sport that best displays character, teamwork and citizenship.

2016 (Junior): Started all 13 games at defensive end … Ranked eighth on the team overall and second among defensive linemen with 39 tackles … Tied for fifth on the squad with four tackles for loss … Ranked second on the team with nine quarterback hurries … Recorded multiple tackles in 11-of-13 games … Notched 13 tackles, two tackles for loss, three quarterback hurries and a pass breakup over a three-game span in October (four tackles and a TFL at Pittsburgh on Oct. 8; four tackles, three QBH and a PBU vs. Georgia Southern on Oct. 15; five tackles and a TFL vs. Duke on Oct. 29) … Had two hurries and was in on a tackle for loss in win at No. 18 Virginia Tech (Nov. 12) … Notched two more QBH versus Virginia (Nov. 19) … Closed the regular season with a career-high nine tackles in win at Georgia (Nov. 26) … Had three total tackles and was in on a tackle for loss in TaxSlayer Bowl triumph over Kentucky (Dec. 31) … Was recognized at 2017 Allstate Sugar Bowl as a member of the 2016 AFCA Allstate Good Works Team for his achievements on the field and in the community, which includes extensive time as a volunteer at Scottish Rite children’s hospital in Atlanta.

High School: Callaway H.S., December 2013 … Played four seasons of football for coach Pete Wiggins … Ran one season of track … Played inside linebacker and defensive end … Served two years as team captain … Led Callaway to regional championships in 2012 and 2013 … Named 2012 Region 4AAA Player of the Year … Earned all-regional honors in 2011 … Recorded 153 tackles, 13 tackles for loss, four forced fumbles, three sacks and three blocked kicks as senior … Led team to 12-2 record in 2013 … Three-star recruit by Rivals … Ranked No. 29 at position and No. 54 in Georgia … Graduated in top five percent of class … Was crowned Mr. Callaway High School based on academics and behavior.

Personal: Full name is KeShun Jamal Freeman … Born Nov. 10, 1995 in LaGrange, Ga. … Parents are Charles and Keisha … Has four younger siblings – Michael, Jacob, Jalanda and Landon … Cousin, Justin Woodard, played football at Ball State … Pondering career in anesthesiology … Chose Georgia Tech because of academics, location and because “it will challenge me to think” … Began playing football at age eight … Graduated from Georgia Tech in December 2017 with a bachelor’s degree in business administration.