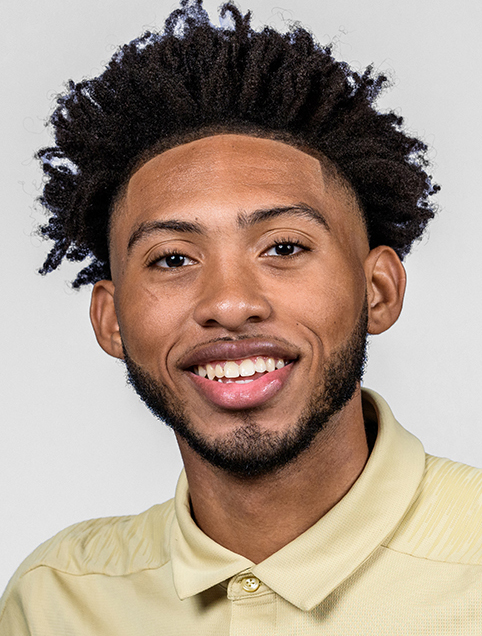 Imposing physical presence in the middle, proved to be an excellent rim protector and rebounder for the Jackets … Was voted to the ACC’s All-Defensive team in 2019 and again in 2020 … finished his Tech career No. 8 in career blocked shots, swatting 154 over two seasons … Has a wingspan of 7 feet, 5.35 inches and a standing reach of 9 feet, 3.5 inches … Joined the Georgia Tech program in the summer of 2018 after playing two seasons at Texas … Received approval from the NCAA on November 13 granting him immediate eligibility … In 46 total games at Texas, Banks averaged 1.7 points, 2.3 rebounds and 1.1 blocks in 10.7 minutes per game, and surpassed all of his statistical totals in just 23 games last season at Georgia Tech … Wore No. 00 as a sophomore for Texas, No. 4 as a freshman … Enrolled in history, technology and society at Tech.

Six double-doubles as a senior, scoring 20 points with 13 rebounds and five blocked shots at NC State, 20 points and 14 boards vs. Arkansas, 12 points with 10 boards and eight blocks vs. Bethune-Cookman, 14 points and a career-high 15 boards with seven blocks vs. Duke, 13 and 10 at Notre Dame (Feb. 1), 13 and 14 vs. Miami … No. 2 in the ACC and No. 22 in the nation in blocked shots (2.45 per game) … Ranked No. 9 in ACC in rebound average (7.58 rpg) in all games and in ACC games only (7.70) … Finished as Tech’s No. 4 scorer at 9.5 ppg, making 52,5 percent of his shots from the floor … In ACC games, averaging 9.5 points, 7.7 rebounds, and hit 55.2 percent of his shots from the floor … Shot 63.3 percent from the foul line in team-high 124 attempts; 64.6 percent in ACC games … Knocked down a pair of FT with two seconds remaining in OT for winning points at NC State on Nov. 5 … One of 10 ACC seniors under consideration to represent the conference in the 2020 Dos Equis 3X3U National Championship which will take place at Atlantic Station during the NCAA Final Four weekend … Also received an invitation to the Portsmouth Invitational Tournament (NBA tryout event for college seniors).

There’s no debating that @1jamesbanks one of the best shot blockers in the country, but he can score it pretty well too.#MotorAndGrind /// #TogetherWeSwarm 🐝 pic.twitter.com/key50NS4CO

In the summer of his freshman season, teamed with former UT teammates Jarrett Allen, Mohamed Bamba and Matt Coleman along with coach Shaka Smart to lead Team USA to a gold medal at the 2016 FIBA Americas U18 Championship in Valdivia, Chile … Played in four of the five games in the tourney and led Team USA in blocks (7) and ranked sixth on the team in rebounding (4.5 rpg) while playing 9.8 minutes per game.

Attended La Lumiere School in La Porte, Ind. (head coach Shane Heirman) … Ranked as the No. 49 overall prospect in the nation by Scout, No. 57 by ESPN and No. 83 by Rivals following his senior year … Led the Lakers to a 27-4 overall mark during his senior season … Helped La Lumiere to the championship game at the 2016 Dick’s Sporting Goods High School Nationals in New York City … Averaged 23 points and 14 rebounds per game in his junior season while playing at Mount Vernon Presbyterian School (Atlanta, Ga.).