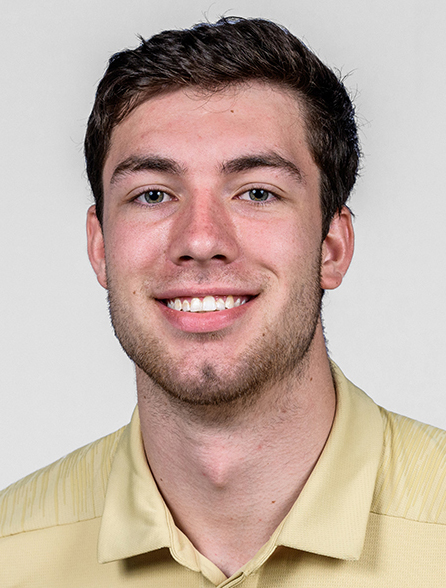 Versatile frontcourt player with varied skills who was a solid contributor off the bench and as a par-time starter over his three years on The Flats … Success came from hard cutting offensively and crashing the glass at both ends of the floor … High-motor player with good athleticism and shooting ability … Able to play multiple positions and could be a difficult matchup for defender … Originally signed a letter-of-intent to attend UNC-Wilmington, but received a release when the Seahawks coach, Kevin Keatts, left the school to become the head coach at NC State … Stepson of former Yellow Jacket softball pitcher Jessica Sallinger Cole, a two-time All-American and three-time All-ACC performer from 2002-05 … She was inducted into the Georgia Tech Sports Hall of Fame in 2015 … Middle of three boys … Began playing basketball at age 6 … Enjoys watching movies … Business administration major who completed his undergraduate studies in three years, elected to transfer for his final season of eligibility.

Worked at the “5” position over the summer, and led the Jackets in scoring (12.8 ppg) and rebounding (6.0 rpg) in their August trip to Spain … Averaged 12.6 minutes as a junior (11.9 in ACC games), averaging 4.4 points and 3.6 rebounds per game while hitting 47.1 percent of his shots from the floor … Similar numbers in ACC games (4.3 ppg, 46.7 pct. FG) … Two double-digit efforts in ACC games … Came off the bench to score 11 points in Tech’s Jan. 25 win over NC State, his first double-digit game since Jan. 2, 2019 and first in an ACC game since his freshman year … Scored 10 points with eight boards against Pittsburgh … Had a 10-rebound game against Morehouse, his first double-digit rebound game since his freshman year … Gave Tech a lift with Banks in foul trouble at Wake Forest, scoring nine points weith seven boards in 19 minutes … Six points and four boards vs. Miami … Big part of Tech’s Jan. 4 win at North Carolina, scoring nine points on 4-of-7 shooting with two assists and no turnovers in 16:17 … Six points, four rebounds vs. Virginia … Also had nine points and nine boards vs. Elon, eight points and nine boards vs. Arkansas … Started two games against Bethune-Cookman and Nebraska (8 pts, 6 reb) … Missed Virginia Tech and Pitt games with a sprained right ankle.

Made the starting lineup to start the season … Missed seven of the next nine games recovering from a sprained left ankle suffered in game 2 at Tennessee …  Solid play off the bench after return from ankle injury – personal bests of 11 points against Kennesaw State, then 16 against USC Upstate, nine points against Wake Forest, eight at Syracuse, seven at Duke and FSU … Saw his most extensive playing time since the season’s first two games (14.5 mpg) until a run-in with the flu sidelined him for three more games … 25-of-47 from the floor, 5.3 ppg, 3.0 rpg in those 12 games … Did not play in the season’s final three games.

Forsyth County player of the year as a senior, two-time all-state and four-time all-region performer on the 6A and 7A level … Averaged 20 points, 11 rebounds and three blocked shots per game as a senior for coach Scott Givens at South Forsyth High School, which made state playoff appearances in 2016 and 2017, the first back-to-back berths for the school since 2007-08 … As a junior, he averaged 21 points, 11 rebounds and three blocks … Finished his career No. 2 in career points at South Forsyth, despite missing 10 games his junior year, and No. 1 in blocked shots … Named most valuable player in the GACA North-South All-Star Game following his senior year, hitting six three-point field goals and scoring 30 points with nine rebounds and four blocks, and the Forsyth/Gwinnett all-star game … Team captain three years.