“I’m really proud of those guys, the way they played, the way they fought. I told them in the locker room that the reason we practice the way we practice, one of the big things that came up that ended up winning the game for was, was sudden change football. Anybody that comes out to one of our practices, we practice sudden change an inordinate amount of time. The ball was at the 1-yard line, the defense never panicked, got a goal line stand to win the game. At the end, having the presence of mind to know exactly what we needed to do, it was right on that mark to take the knee with delay. Lucas [Johnson] did an unbelievable job understanding the situation and sealing the win for us.

“The reason we do our above the line depth chart, the reason guys practice so much because of what happened to us defensively today, so many guys played. It was a hot day out there today but we were able to stay fresh because we were rolling guys in the entire day. We lost two offensive linemen early in the game and other guys, just because they practice the same amount of reps as everyone in the organization, were ready to come in.  William Lay [III] played 90 percent of the game at center and did a really good job. He’s a walk-on in this program but we couldn’t care less. When they are out there on the field, when they are out there at practice, everybody gets reps in this organization, everybody is a valuable member. If you earn the right through your practice habits to play and play at a high level, you’re going to get in there.

“I’m proud of Coach [Andrew] Thacker and the defensive unit, how hard they played, holding a really good offense under 262 [yards], nine tackles for loss which helps for that. JP [Jordan Mason] had over 100 yards but he ended up with 99. I’m just proud of them and proud of the offensive line. All three quarterbacks played and we kept changing the tempo, changing the pace, changing the thing that we were doing offensive to try to keep them [USF] off balance as much as we could.

On what he said to the team to bounce back from the loss at Clemson:

“It’s really what we have said for nine months. It’s every single play has a life of its own and we can’t worry about anything else then what is right in front of us. The things that we learned from last week were culture built on effort: I thought we played really hard last week, we played really hard today. Competition is king: we competed last week, we competed our butts off today. Family over everything: we stayed together last week, we stayed together this week. The things we learned last week and we made a huge emphasis on is doing your job and playing clean football and executing your fundamentals on every single play regardless of the situation, regardless of what is going on externally. Just stay in the moment and plat at a high level and they did that.” 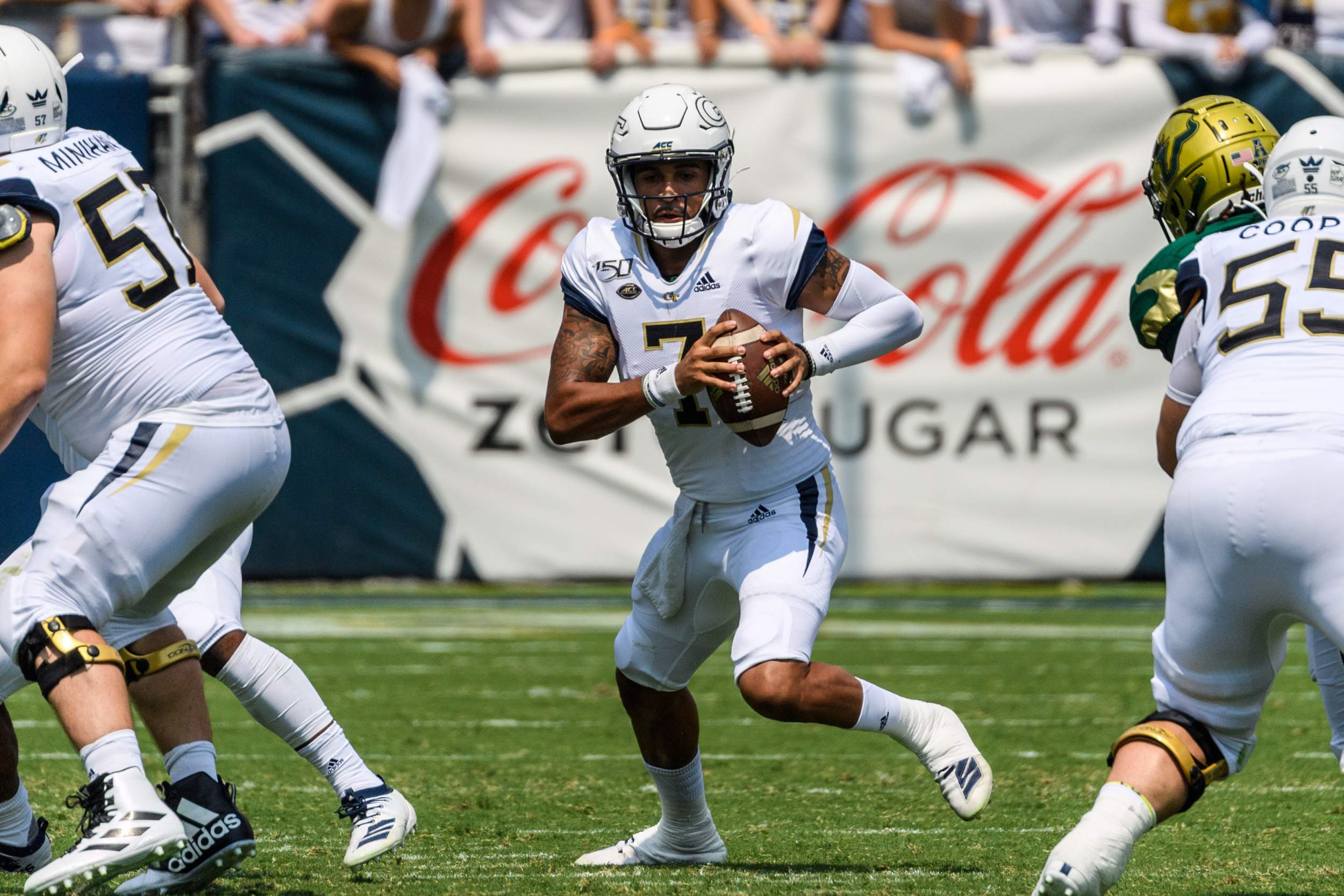 On the goal-line stop and fumble recovery in the fourth quarter:

“Our plan was just to do anything to keep them out of the end zone. Our job is to lock them out. The dude tried to jump over us and we saw the ball, saw the opportunity to punch it out and ended up grabbing it. It was just one of those miracle plays. It was a great play.”

On rotating in and out on defense:

“Having young guys play is nothing new ever since they got here. Everybody is getting the same amount of reps, whether you are a walk on, freshman or transfer coming in. So, it prepares you for a situation like this and it makes the job easier for everybody that’s playing because you want to stay in for a longer series and you know the person coming in knows what they’re doing and will get the job done. So, overall it makes the defense better as a whole.”

On playing a different style defense this year:

On winning their first home game:

“It was a good momentum booster. Our first home game so we got our fans coming out and the student section going crazy. It’s great to have your first win at home. I would have liked to have it last week but that’s just the way college football is. But winning our first game at home, that’s amazing.”

On getting off the field on third down:

“We really do put a lot of energy into third downs. You see some of our staff holding up signs that say, ‘Money Down.’ We really think it is one of the most important downs on the field, trying to get them off the field and give our offense a chance to score a touchdown, so we really have emphasis on third down.”

On the goal line stop and fumble recovery in the fourth quarter:

“The play before we had given up a big play and I had confidence in our defense. The coaches always say, ‘play the next play,’ so, I had plenty of confidence on that one. It was a very good play.”

On the special teams play and field position:

“It was good, especially coming up to where our student section is. It’s always good to have the fans right there behind you and being loud. It always gets everybody juiced.”

On getting off the field on third down:

“We made a big improvement from last year on third down because last year we struggled. So, this year we put a lot of emphasis on that.”

On moving to inside linebacker this year:

“At first I really didn’t like it. Playing with bigger guys I really had to use my agility to be quicker than them. But as of right now I feel like I’ve gotten way better with it and I feel like I’ve got an advantage because I’m way faster than most inside linebackers.”

On defensive coordinator/linebackers coach Andrew Thacker wanting him to play linebacker this spring:

“I’m just glad that we have the respect and the love for each other and that he can believe in me and I can go out there and play my heart out for him. I feel like we’ve got a great relationship.”

On how the defense helps him get around the ball:

“We do a lot of slants and schemes with the fronts and it takes up blocks for me and gives me time to get over and really run to the ball without people being able to get hands on me.”

On if he was disappointed falling just short of 100 yards rushing:

On injuries to the offensive line:

“Injuries aren’t really going to hurt us because in practice we practice everybody. We all get the same amount of reps. So, if someone gets hurt we’ve got backups that already know what to do.”

On what he wanted to improve on from last week:

“In the Clemson game I didn’t think I blocked well, so coming into this game I made it mandatory for me to get my blocking skills back to where I used to be and I think I had a good pass protection game today.”

On playing the most snaps in his college career:

“It was really fun. I waited a long time for it. I was just going along with coach’s game plan and what he wants us to do. He puts us in the best situation to win the game, so when I got in there I just tried to take control, be a leader and just do what I can do.”

On how the offense performed today:

On using game reps to get better:

“That’s the only way you’re really going to get better. So, going back to look at the film, see what I could have done better, what reads I might have missed. It’s really helpful to go back and look at film and try to build on your mistakes so you could have a cleaner game.”

On what he can do better going forward:

“Nobody is perfect. You’re going to have some tough plays but it’s always about turning the page. Even on good plays, you don’t want to dwell on it too long. You just want to turn the page and worry about the next play. I’m sure we can go back and look at film and I’m sure I had a couple of mistakes out there, but it’s all about building and moving on to the next week and just ironing out the kinks. 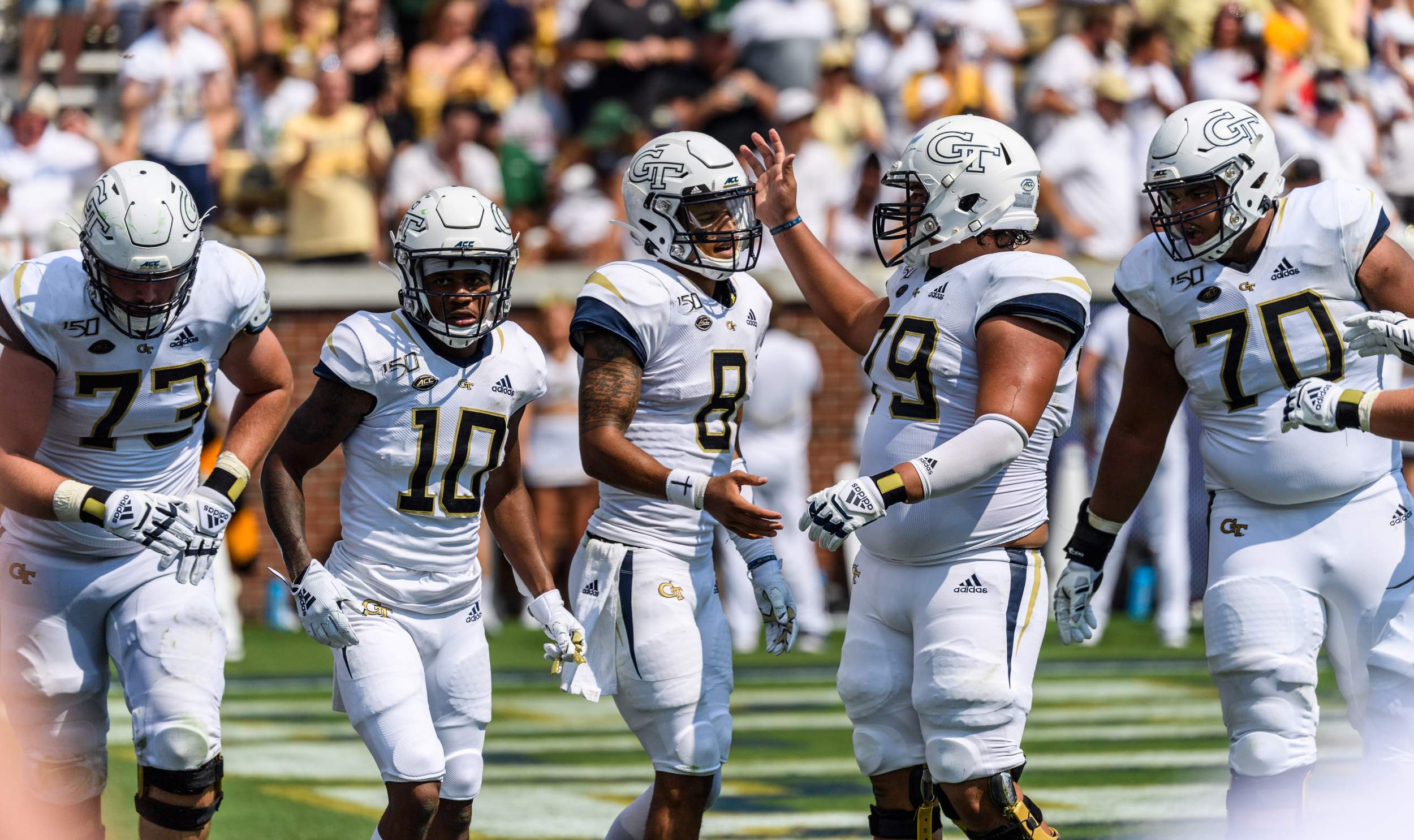 “I told our guys that any time you go on the road, you don’t leave the game in the hands of the officials. We made a stop there, and whatever the call was, that we were out of timeouts, then the game was going to end. But we had an opportunity, had a first-and-goal on the 1. We had a procedure call, and the ball was moved back. Now we try and go up and over the top, and another call there, we don’t get the call. So they create a fumble. And then we let them out there on defense.

On the view from the sideline on the Cronkrite fumble

“We thought he was in, but the officials reviewed it and said he wasn’t over, so they gave them a fumble there.”

On the officials’ explanation on the targeting penalty

“They said they reviewed it up top. They (Tech) were going to punt the ball. They said with the review that it was targeting. I don’t even think he hit the guy.”

On the decision to put McCloud in at QB

“We just needed a spark, needed to get something going on offense. We came out with Jah’Quez (Evans) early and let him run the ball a few times, and then we came back with Jordan there late in the third and the beginning of the fourth quarter. He made some good throws. So we will re-evaluate it after we have a chance to look at it next week.”

On frustration of losing after the interception deep in Tech territory

“It’s frustrating when you have a first-and-goal on the 1 you lose the game, and you’re only down at the time by four points. Your defense is playing well, so if you get a score there, then you put the ball back in the hands of the defense and make them have to drive a long way, and you make their quarterback have to make throws that he hasn’t been making all day.”

On the play of the defense, best in your two years?

“It probably was. They had two key turnovers, but they had some really key stops. We went into this knowing we had to stop the quarterback, because he was going to make some big runs. We knew that we had to get that done.”

On play of special teams

“No, because our defense was playing so well, we felt like we could stop them and get the ball back. Then we made the stop, and Jordan hit Wilcox, and I thought he had dove in and scored. Then they put the ball down on the 1-inch line.”