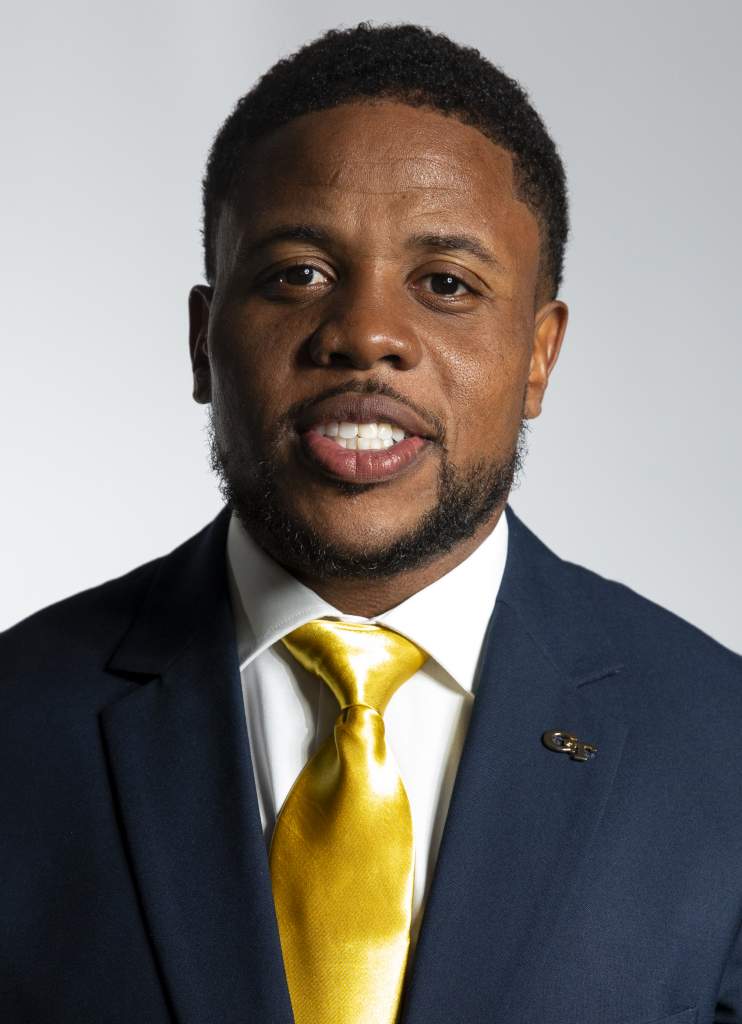 Tashard Choice, a two-time Atlantic Coast Conference rushing champion at Georgia Tech and former National Football League running back, is in his first year as running backs coach at his alma mater. In his first season as the Yellow Jackets’ running backs coach, he coached an all-ACC honoree in Jordan Mason and, in his role as offensive recruiting coordinator, was instrumental in putting together the second-highest ranked recruiting class in Tech history.

A Jonesboro, Ga. native, Choice returned to Georgia Tech from North Texas, where he was named one of six finalists for FootballScoop’s 2018 Running Backs Coach of the Year award.

Before entering the coaching ranks, Choice enjoyed a six-year NFL career (2008-13), most notably spending four seasons with the Dallas Cowboys. As a running back at Georgia Tech (2005-07), he led the ACC in rushing in 2006 and 2007 and remains Tech’s only two-time ACC rushing champion.

In his first season as running backs coach at his alma mater, Choice coached an all-ACC honoree in Jordan Mason and, in his role as offensive recruiting coordinator, was instrumental in putting together the second-highest ranked recruiting class in Tech history.

Choice came back to Georgia Tech after serving as the running backs coach at the University of North Texas in 2018. He was one of six finalists for FootballScoop’s 2018 Running Backs Coach of the Year award, joining a group that also includes Oklahoma’s Jay Boulware and Clemson’s Tony Elliott.

The Jonesboro, Ga. native began his coaching career as an intern with the Dallas Cowboys in 2016, where he helped spur Cowboys running back Ezekiel Elliott to one of the best rookie campaigns in NFL history. His stint with the Cowboys was followed by a pair of record-breaking seasons at UNT, first as an offensive quality control assistant in 2017, then as running backs coach in 2018.

In his two seasons on the UNT staff, the Mean Green posted back-to-back nine-win seasons for the first time since the program joined the NCAA Division I FBS ranks in 1995.

Under Choice’s tutelage as running backs coach in 2018, UNT sophomore running back Deandre Torrey amassed 1,182 yards from scrimmage (977 rushing, 205 receiving) and scored 17 touchdowns, en route to being named second-team all-Conference USA. Making Torrey’s development even more impressive is the fact that he didn’t enter the starting lineup until nearly midway through the season, as UNT junior Loren Easly was C-USA’s leading rusher with 386 yards in four games before he sustained a season-ending injury.

Choice also assisted with the UNT’s running backs in his quality-control role in 2017 and played a part in all of the Mean Green’s running backs averaging at least 5 yards per carry, led by second-team all-C-USA selection Jeffrey Wilson (1,215 yards and 16 touchdowns in just 11 games, good for the nation’s second-highest yards-per-game average – 110.5 ypg).

A first-team all-ACC honoree as a senior and a second-team selection as a junior, Choice was also recognized as an honorable-mention all-American as a senior in 2007. He will be inducted into the Georgia Tech Sports Hall of Fame in October.

A two-time member of the ACC academic honor roll, Choice graduated from Tech in 2007 with a bachelor’s degree in history, technology and society.

He married his wife, Rebecca, in February 2019.