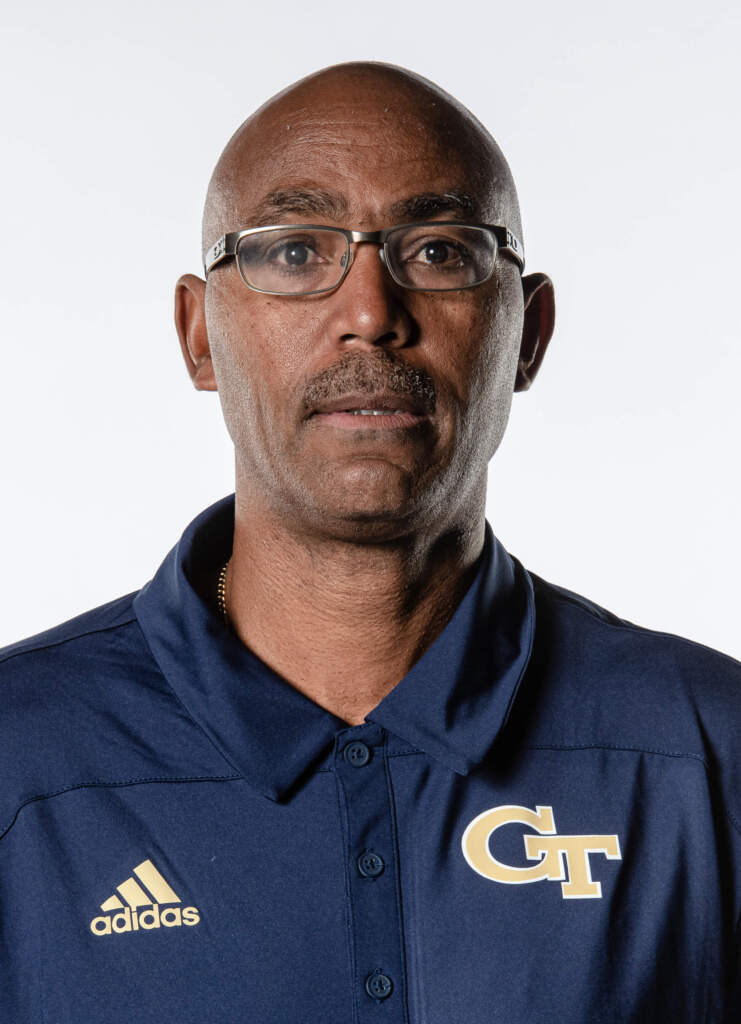 Harmon has guided the Yellow Jackets to seven-straight NCAA Tournament appearances, including a run to the NCAA Semifinals to cap the 2017-18 season. The Jackets made three-straight NCAA Sweet 16 appearances dating back to the 2016.

Harmon has mentored five All-Americans, 15 all-ACC selections and has been twice-named ACC Coach of the Year (2016, 2017).

Prior to his arrival on The Flats, Harmon served as the men’s tennis head coach at Miami (1995-97), director of tennis at the Deerwood Country Club and as the USTA national coach. He also served as the U.S. men’s tennis coach at the 2008 Olympic Games in Beijing, China.

FULL BIO:
Georgia Tech hired Rodney Harmon July 3, 2012, as the seventh head women’s tennis coach in school history. Harmon has gone 145-69 over the past eight seasons as the head coach of the Yellow Jackets.

Harmon led the Yellow Jackets to a fifth place finish in the ACC during a shortened 2019-20 season due to Covid-19. Tech posted a 15-6 overall record and went 5-2 in league play before seasons were suspended due to the pandemic. During the 2020 season, the Jackets captured the ITA Kick-Off Weekend at South Carolina, defeating Wisconsin and USC to claim a spot in the ITA National Team Indoor Championships in February. Tech’s No. 1 doubles duo of Kenya Jones and Victoria Flores were tabbed ITA All-Americans at the conclusion of the season. Jones and Flores went 20-2 overall, including a 15-1 dual record and 6-0 ACC ledger, and climbed as high as No. 6 in the ITA national polls. Additionally, Jones earned ITA All-America status in singles after leading the Jackets from the top singles spot, compiling a 17-9 overall record. Tabbed ACC Player of the Week three times during the season, Jones rose to No. 20 nationally in singles.

In 2018-19, the Yellow Jackets recorded their 20th consecutive NCAA Tournament appearance. Tech defeated No. 25 Ohio State in the round of 64, 4-3, before the Jackets fell to No. 8 Vanderbilt in the round of 32. Junior Kenya Jones was tabbed ITA All-American after going 29-12 overall from the No. 1 singles position. Jones rose as high as No. 8 in the national rankings and finished the campaign ranked No. 15. Additionally, Jones was tabbed all-ACC first team.

The 2017-18 women’s tennis season was one for the record books as the Yellow Jackets recorded just the second trip in program history to the NCAA Semifinals. The Jackets capped the year with a 25-6 overall record and 12-2 ACC ledger, reaching the semifinals of the ACC Tournament. Tech climbed as high as No. 2 in the national rankings during the season and boasted the No. 1 doubles team in the country, Paige Hourigan and Kenya Jones, for several weeks on the national polls. Three Jackets collected all-ACC honors at the end of the season: Hourigan (first team), Jones (second team) and Johnnise Renaud (third team). Hourigan and Jones also earned the ACC’s automatic berth into the NCAA Championships as a doubles tandem. The pair, who were tabbed ITA All-Americans, reached the NCAA quarterfinals after helping the team advance to the semifinals.

After earning their 19th consecutive NCAA Tournament berth, the Jackets defeated Eastern Kentucky and Winthrop in the NCAA Regional to reach the round of 16 where they recorded a comeback win over Pepperdine to clinch a spot in the Elite Eight. In the quarterfinals, Tech posted another comeback win over No. 14 UCLA. After trailing the Bruins, 3-1, Nami Otsuka, Hourigan and Ida Jarlskog lifted the Jackets past the Bruins, 4-3, to the semifinals. Tech fell in the NCAA Semifinals to top-seeded and No. 2 Vanderbilt, 4-2.

In 2016-17, Harmon led the Jackets to their best record during his tenure and since 2007, compiling a remarkable ledger of 27-5. Tech claimed a share of the ACC regular season championship, going 13-1 in league play and remained undefeated against league opponents until the final match of the regular season. On April 29, the Jackets avenged their only ACC loss of the season at Duke, with a 4-2 win over the Blue Devils in the ACC Championship semifinals. With the win, Tech made its sixth appearance in the ACC Championship match since 1986, but dropped a heartbreaker to UNC, 4-3. Four Jackets earned ACC recognition as Rasheeda McAdoo and Jonnise Renaud were named All-ACC first team, Paige Hourigan was tabbed All-ACC second team and freshman Nami Otsuka was listed on the All-ACC third team. For the second consecutive season, Harmon was named the ACC Coach of the Year. Additionally, Harmon was tabbed the 2017 Wilson/ITA Southeast Region Coach of the Year, becoming the second coach in program history to earn the honor.

Tech continued its postseason success in 2017, making its 18th straight NCAA Tournament appearance and hosted the first- and second-rounds at the Ken Byers Tennis Complex. The Jackets upended Alabama State and Northwestern to reach the Sweet 16 for the second straight year before falling to Oklahoma State in the Round of 16 in Athens. McAdoo and Renaud both earned individual NCAA singles bids in addition to earning a doubles bid to the NCAA Championships. The Tech duo of Hourigan/Kenya Jones also received a doubles bid and advanced to the second round. At the conclusion of the season, Harmon was named the Wilson/ITA Southeast Region Coach of the Year.

In his fourth season on The Flats, Harmon led the Jackets to a 19-9 overall record and 11-3 ACC ledger. Tech reached the semifinals of the ACC tournament, falling to Miami, but rebounded, earning an at-large bid into the NCAA Tournament for the 17th consecutive season. By way of winning the Columbia, S.C. regional, Tech advanced to the round of 16 in Tulsa, Oklahoma where they fell to Ohio State. Harmon was named the ACC Coach of the Year, while Johnnise Renaud was tabbed All-ACC first team and Paige Hourigan was named All-ACC third team. Renaud and Hourigan each earned NCAA singles bids, while the pair of Kendal Woodard/Hourigan earned a doubles bid as well.

During his third season on the Flats, Harmon led his team to a 17-10 overall record and a 9-5 mark in ACC play. The Yellow Jackets made their 16th consecutive trip to the NCAA Tournament, advancing to the second round, and finished the season ranked #20 in the ITA Rankings. During the ACC Tournament, the Jackets advanced to their fifth ACC Championship Title Match before falling to Virginia. Georgia Tech finished the ACC season in sixth and both freshmen Johnnise Renaud and Paige Hourigan were named to the All-ACC Second Team.

Harmon’s second season at the helm of the Yellow Jackets started off with a bang after sophomores Megan Kurey and Kendal Woodard won the USTA/ITA National Indoor Intercollegiate Championships doubles title. The duo also captured the USTA/ITA Southeast Regional Doubles title during the fall. Kurey and Woodard were ranked as the number one doubles team in the country on February 11, 2014 and received the #6 seed in the 2014 NCAA doubles championships. Woodard garnered conference honors for the second season in a row after being named to the All-ACC First Team while Kurey was named to the All-ACC Second Team.

The Yellow Jackets went 14-10 overall and 9-5 in the ACC during Harmon’s second year at the helm of the Jackets. Tech closed out the 2014 regular season with an exciting 4-3 win against No. 1 Duke. The win against the top-ranked team in the country was the first of Harmon’s career and fourth in the history of the Yellow Jackets. The Jackets received the six seed in the 2014 ACC Tournament and advanced to the quarter finals before falling to Virginia.

In 2014, Tech received its 15th straight berth in the NCAA Tournament. The Yellow Jackets defeated Purdue in the first round, 4-0, before falling to overall nine seed Vanderbilt, 4-2, in the second round.

Harmon had quite the successful first season on the Flats, leading his team to a 15-10 record and a 7-4 mark in the ACC. The Jackets reached its highest ranking of the season in the ITA rankings at #19 during the week of April 9th. Tech defeated nine ranked teams, including four that were ranked in the top-25.

Freshman Kendal Woodard was honored on the 2013 All-ACC Women’s Tennis Team while Elizabeth Kilborn, Megan Kurey and Elizabeth Kurey were all named to the All-ACC Academic team during Harmon’s first year.

Harmon brings 25 years of player development to the Yellow Jackets with prior experience in both junior and college tennis. Most recently he served as the director of tennis at the Deerwood Country Club in Jacksonville, Fla.

“We are very excited to announce Rodney Harmon as the head women’s tennis coach,” then Director of Athletics Dan Radakovich said. “I am confident those who support Georgia Tech will agree Rodney is the ideal candidate for this position. Rodney joins us with a wealth of tennis knowledge, a commitment to academics and he is a family man with strong integrity. The future is exciting for Georgia Tech women’s tennis.”

Harmon was the men’s tennis head coach at the University of Miami from 1995 until 1997 where he brought in the No. 1 recruiting class in 1996, led by No. 1 recruit Michael Russell. Harmon was the 1996 and 1997 Big East Conference Coach of the Year during his time with the Hurricanes.

“I am extremely excited to join the Georgia Tech staff,” Harmon said. “Georgia Tech is an outstanding institution with its strong academic profile and rich athletic tradition. The Yellow Jackets have a history of great teams, especially the 2007 team which won the national title. My goal is to continue to build on the ground work Bryan Shelton built and for our team to excel both in the classroom and on the court.

“I want to thank Dan Radakovich and Theresa Wenzel for the opportunity to join Georgia Tech,” Harmon added. “This is one of the best jobs in the country. With the addition of the Ken Byers Tennis Complex and the support of the administration and the fans, we will continue to have a team to be proud of.”

The Ken Byers Tennis Complex will have six state-of-the-art indoor courts, replacing the three indoor courts in the old facility. The indoor facility will be located on 10th Street, will house men’s and women’s coaches’ offices, men’s and women’s locker rooms and a team lounge. Six competition courts will go in near Griffin Track and four practice courts will be constructed between the indoor facility and the competition courts.

Harmon left the Hurricanes to re-join the United States Tennis Association training center headquarters in Boca Raton, Fla., where he advanced to director of men’s tennis. During his tenure at the USTA, Harmon served as the head coach of the U.S. men’s tennis team at the 2008 Olympic Games in Beijing, China.

Before joining Miami, Harmon spent four years as the USTA national coach where he coached future pros including Todd Martin, MaliVai Washington and Alex O’Brien. During his first stint with the USTA, Harmon served as the U.S. men’s tennis head coach at the 1993 World University Games in Buffalo, N.Y.

Harmon began his collegiate career at the University of Tennessee before transferring to Southern Methodist University where he graduated from with a Bachelor of Arts in Broadcast/Film in May, 1983. He was the 1980 NCAA Doubles champion at Tennessee with Mel Purcell and advanced to the semifinals of the NCAA Singles Championship. Harmon and Purcell were the 1980 ITA Doubles Team of the Year and Harmon won the SEC No. 2 singles title.

After transferring to SMU, Harmon won the 1982 and 1983 Southwest Conference No. 1 singles title. He was inducted into the ITA Collegiate Tennis Hall of Fame in 2010.

While still a student-athlete at SMU, Harmon advanced to the quarterfinals at the 1982 U.S. Open with a win over 1980 Australian Open Champion Brian Teacher before falling to eventual champion Jimmy Connors. Following his successful collegiate career, Harmon played professionally where he reached a career-high ranking of No. 56 and made the third round at Wimbledon in 1983.