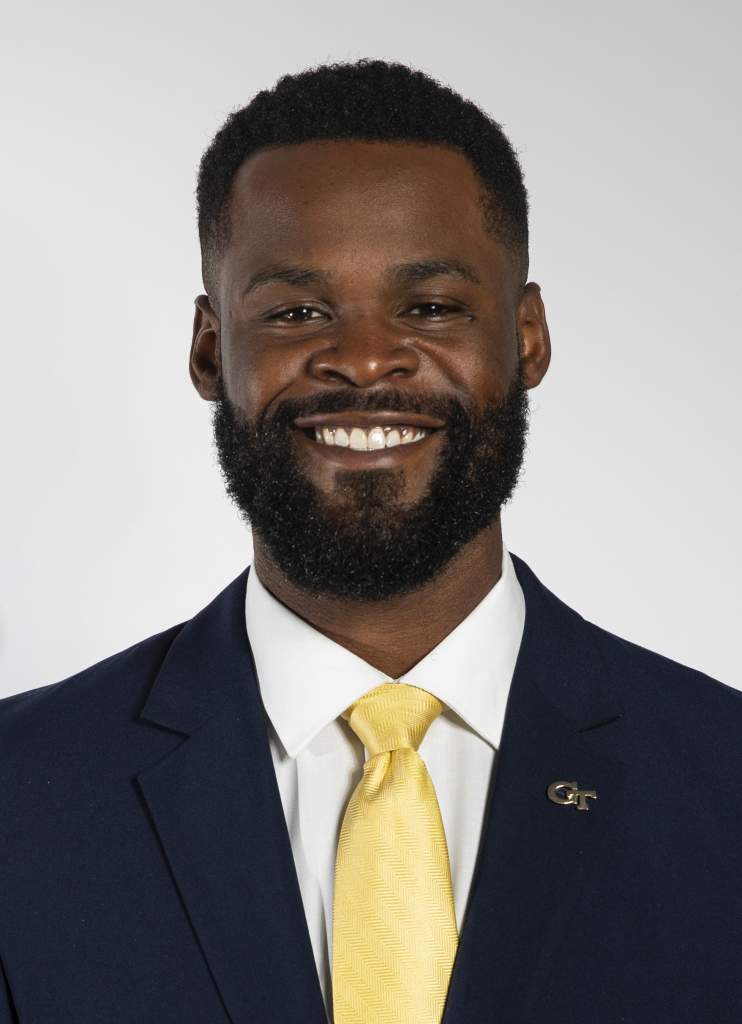 In his role as defensive recruiting coordinator, Knight was instrumental in putting together the second-highest ranked recruiting class in Tech history in 2020.

Knight comes to Georgia Tech after two seasons under head coach Geoff Collins at Temple. He began at Temple as a quality-control assistant before being promoted twice — first to director of player personnel and then to outside linebackers coach/defensive recruiting coordinator.

Knight is an Augusta, Ga. native and has coaching experience in Atlanta, having spent two seasons as outside linebackers coach at Georgia State, where he helped lead GSU to its first-ever bowl berth in 2015. He coaching career also includes stints at Tennessee and Cincinnati.

He was an all-conference defensive end at Central Michigan, where he graduated in 2010.

In his role as defensive recruiting coordinator, Knight was instrumental in putting together the second-highest ranked recruiting class in Tech history in 2020.

Knight came to Georgia Tech from Temple, where he was a member of head coach Geoff Collins’ staff for two seasons (2017-18).

Knight held many roles at Temple, initially joining Collins’ staff as a quality-control assistant for defense and recruiting in 2017, then being elevated to director of player personnel in February 2018 before being promoted once again to outside linebackers coach/defensive recruiting coordinator a month later. In 2018, he was part of a defensive staff that helped Temple rank among the top four teams nationally in defensive touchdowns (8 – first), forced turnovers (31 – third), fumble recoveries (13 – third) and interceptions (18 – fourth) and among the American Athletic Conference’s top three teams in total defense (second), passing defense (second), three-and-outs (second) and scoring defense (third).

No stranger to the Atlanta area, Knight also spent two seasons as outside linebackers coach at Georgia State (2015-16). His resume also includes stints at Tennessee (2013-14) and Cincinnati (2011-12).

Prior to his successful two-year stint at Temple, Knight served as the outside linebackers coach at Georgia State in 2015 and 2016. In 2015, he helped coach the most-improved defense in NCAA Division I FBS, as the Panthers allowed 15 points per game less than they did the season prior to his arrival and earned their first-ever bowl bid.

Knight also spent a total of four seasons working under his collegiate head coach, Butch Jones, first at Cincinnati (2011-12), then at Tennessee (2013-14).

As a graduate assistant (2013) and quality-control assistant (2014) at Tennessee, he worked directly with the Vols’ defensive linemen and linebackers, including all-Southeastern Conference selections Derek Barnett and Curt Maggitt, who combined for 21 sacks in 2014 (the third-most by any duo in the nation), and helped put together a pair of top-five-ranked recruiting classes.

As a graduate assistant at Cincinnati (2011-12), he helped lead the Bearcats to back-to-back Big East championships and bowl victories.

Among the notable student-athletes that he has mentored over the course of his career are Derek Wolfe and John Hughes at Cincinnati (second- and third-round NFL draft picks, respectively), Barnett at Tennessee (first-round NFL draft pick and Super Bowl LII champion with the Philadelphia Eagles) and Sam Franklin at Temple (the first player in TU history to record a “defensive cycle” with a tackle for loss, sack, forced fumble, fumble recovery and interception in the same game).

Knight was an all-Mid-American Conference defensive end at Central Michigan from 2006-09, where he racked up 123 career tackles, 25 tackles for loss and 13.5 sacks and helped CMU to three MAC titles, four bowl berths and a No. 23 national ranking in 2009.

He earned a bachelor’s degree in entrepreneurship and marketing from CMU in 2010.