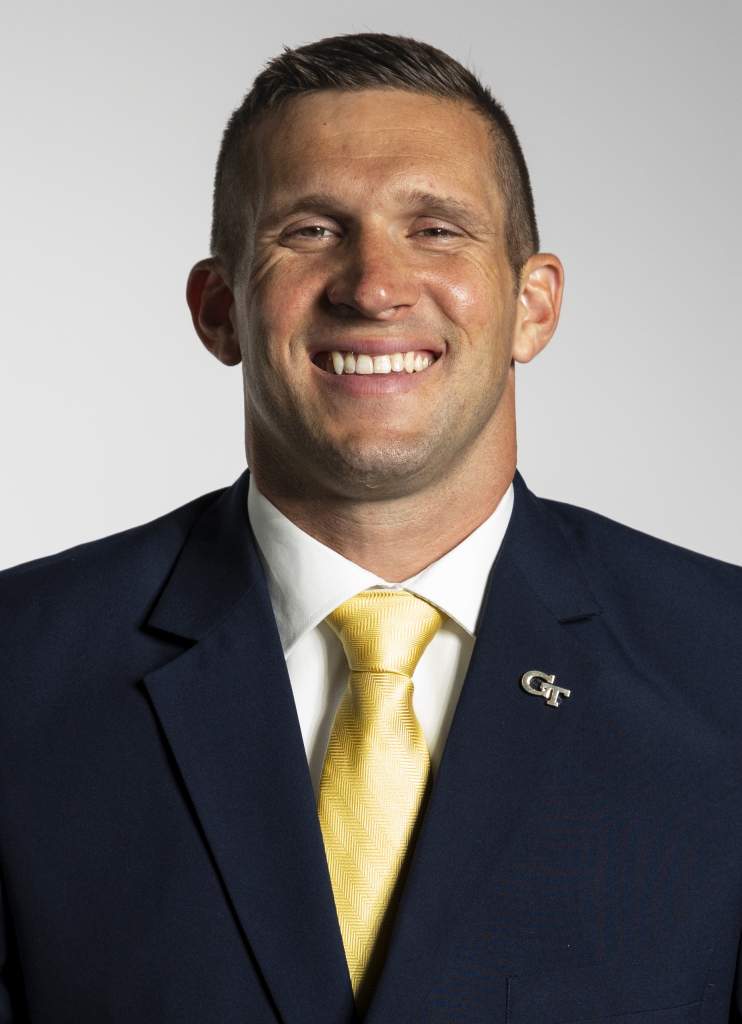 Andrew Thacker is in his second season as defensive coordinator and linebackers coach at Georgia Tech, where he directed a unit that ranked among the nation’s top 40 in pass defense and the top 25 in red zone defense in 2019.

Thacker, an Atlanta-area native (Cartersville, Ga.) played collegiately at Furman (2004-07). He and his wife, Liza, have a daughter, Caroline, and a son, Bear.

Andrew Thacker is in his second season as defensive coordinator at Georgia Tech.

In his first year with the Yellow Jackets, Thacker’s defense produced two all-ACC honorees (LB David Curry and CB Tre Swilling), ranked among the nation’s top 40 in pass defense (207.7 ypg), and ranked among the top 25 nationally in red zone defense (.774).

A metro-Atlanta native (Cartersville, Ga.), Thacker came to The Flats after two seasons on Georgia Tech head coach Geoff Collins’ staff at Temple. He coaches the Yellow Jackets’ linebackers in addition to his duties as defensive coordinator.

Thacker helped produce one of the AAC’s highest-ranked defenses during his one season as the defensive coordinator at Temple. In addition to ranking among the nation’s top three teams in defensive touchdowns, turnovers, fumble recoveries and interceptions, the Owls were among the AAC’s top three teams in total defense (second), passing defense (second), three-and-outs (second) and scoring defense (third). As linebackers coach in 2017, he helped TU rank among the top teams nationally in both sacks (11th) and tackles for loss (11th).

Prior to his two seasons at Temple, Thacker spent the 2016 season in the Atlanta area as linebackers coach at Kennesaw State, where he helped the Owls lead the Big South in scoring defense and rushing defense and rank second in total defense.

Thacker was a four-year starter at safety at Furman (2004-07), where he was named the 2004 Southern Conference Freshman of the Year. He graduated from Furman in 2007 with bachelor’s degrees in political science and Spanish. He and his wife, Liza, have a daughter, Caroline, and two sons, Bear and Jack.