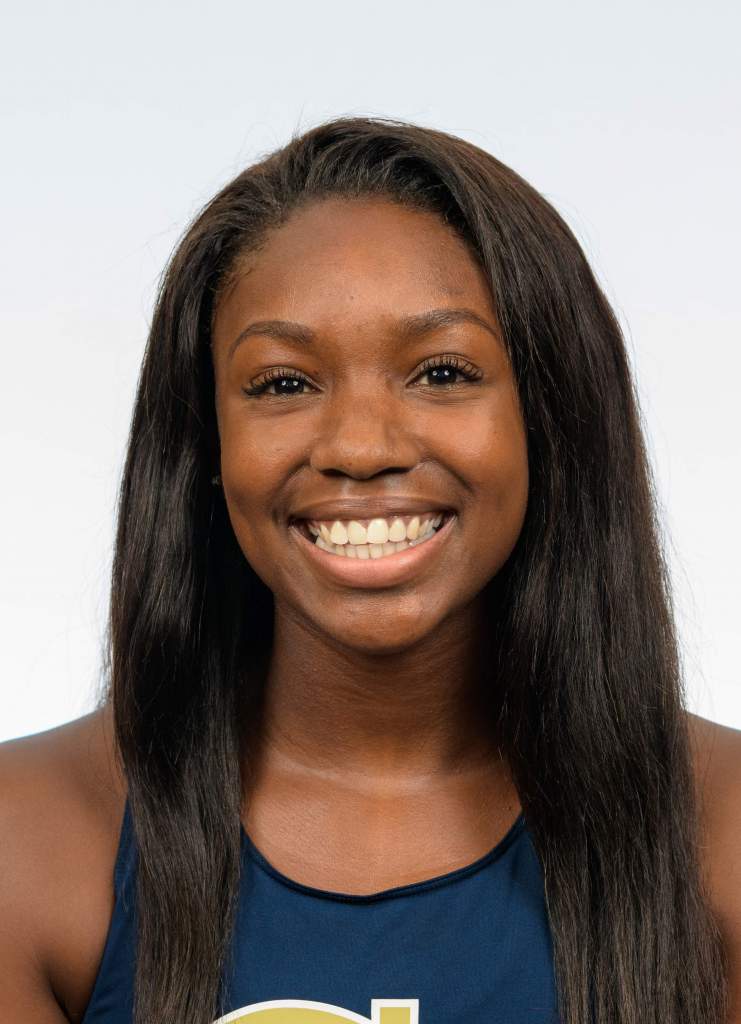 2019-20
Spring: Led Tech from the No. 1 position all season…Finished with a 17-9 overall singles record and a 20-2 overall doubles mark…Ranked as high as No. 20 nationally in singles and No. 6 nationally in ITA rankings in doubles with teammate Victoria Flores…Three-time ACC Player of the Week…Went 12-4 in dual singles…Opened the dual season going 3-1 in singles, all straight-set wins…Clinched Tech’s win over Wisconsin (1/25) in ITA Kick-Off Weekend, topping Antonela Stoica, 6-3, 6-2, to put the Jackets in the championship match…Cruised to a 6-1, 6-4 victory over No. 8 Shiori Fukuda of No. 12 Ohio State (2/7) in the opening round of ITA National Team Indoors…Followed with another top-10 win against No. 6 Michaela Gordon of top-seeded Stanford (2/8) , 0-6, 6-1, 6-2…Went undefeated in the tournament, pocketing a 6-2, 6-2 victory over Emmanuelle Salas of No. 9 Florida State (2/9)…Tabbed ACC Player of the Week following ITA National Team Indoors performance…Collected another top-15 win, defeating No. 15 Natasha Subhash of No. 9 Virginia (2/21), 7-5, 6-4, to give Tech its first lead of the match…Named ACC Player of the Week following win over Subhash…Pocketed a 3-6, 6-3, 1-0 (10-6) victory over No. 3 Alexa Graham of No. 1 North Carolina (3/6)…Capped singles season with a 6-2, 6-1 win over Natalie Novotna at No. 41 Virginia Tech (3/8)…Tabbed ACC Player of the Week following collecting her third win over a top-10 opponent…In doubles action, won first seven matches with Flores…Clinched the doubles point against No. 13 South Carolina (1/26) with a 6-3 decision over Horvit/Shelton to give the Jackets a 1-0 lead…Was deciding doubles match against Ohio State, topping Allen/Boulais, 6-4…Cruised to a 6-2 victory over No. 15 Allen/Hule of No. 9 Florida State to clinch the doubles point against the Seminoles…With a 6-2 victory over No. 41 Gullickson/O’Dell of No. 9 Virginia, gave Tech the early lead in the match…Rolled to a 6-1 victory over No. 11 Meredith/Omirou of No. 12 Wake Forest…Duo went 7-0 against ranked opponents during the season.

Fall: Posted a 5-5 singles mark and 5-1 doubles ledger…Defeated No. 41 Alle Sanford of North Carolina in the Furman Fall Classic, 6-3, 6-0, to open the fall schedule…Competed in the ITA All-American Championships in Tulsa, Okla.…Dropped round of 64 match to No. 35 Georgia Drummy of Vanderbilt, but responded with two consolation wins over ranked opponents…Collected a pair of singles wins at the Rebel Invite, advancing to the final…Dropped only three games en route to a straight-set win over Maria Campos of Colorado before topping Ole Miss’ Tereza Janatova in three sets…Partnered with Victoria Flores in two tournaments, dropping only one match in a tiebreak…Collected three wins at the Furman Fall Classic, capturing the flight two title with an 8-4 win over No. 41 Kelly Chen and Margaryta Bilokin of Duke…Went 2-1 in the Rebel Invite.

2018-19
Spring: Named ITA All-America in singles…First Team All-ACC…Tabbed ACC Co-Player of the Week on March 5…Climbed as high as No. 8 in the ITA national rankings in singles and earned a No. 15 final ranking on May 29…Went 16-7 in dual singles play and 12-8 in dual doubles action…Combined for a 29-12 overall singles ledger and 20-13 overall doubles mark…Went 11-3 in ACC singles action from the No. 1 position and 8-4 against league opponents in doubles…Picked up a super tiebreak victory over No. 22 Maria Mateas at Duke (3/1) for her second ranked singles win of the season…Downed two top-10 singles opponents to close the regular season…Upended No. 6 Alexa Graham of top-ranked UNC (4/12), 7-5, 6-1, before defeating No. 8 Anna Rogers of No. 9 NC State (4/14), 6-4, 7-6 (5)…Helped lift Tech to victory over Ohio State (5/3) in the NCAA Tournament with a straight-set win over Isabelle Boulais, 6-0, 6-4…Won five-straight doubles victories from Feb. 24 against Pitt to March 10 at Louisville with teammate Nadia Gizdova…Picked up a doubles win over Syracuse in the ACC Tournament (4/18).

Fall: Was 13-5 in singles and 8-5 in doubles during tournament play…Ranked No. 44 in singles in the ITA preseason poll…Advanced to the main draw of the Riviera/ITA All-American Championships in California in Oct. winning three qualifying matches…Reached the round of 16 before falling to Gonzaga’s Sophie Whittle in three sets…Advanced to the main draw singles quarterfinals and doubles semifinals with teammate Dalila Said in the ITA Southeast Regionals hosted by Georgia Tech…Opened the spring season going 2-1 in singles at the Michigan Invitational.

2017-18
Spring: Climbed as high as No. 60 in the ITA national rankings in singles and was half of the top doubles team in the country with Paige Hourigan…All-ACC second team…ITA doubles All-American with Hourigan…Went 20-6 in dual singles play and 11-2 against ACC opponents…Combined for an 18-5 dual doubles record including an 8-3 league mark…Earned the ACC’s automatic doubles bid with Hourigan into the NCAA Championships…Earned an at-large bid into singles through an alternate position in the NCAA Championships…Went on a 21-4 match win streak during the course of the regular season…Only conference losses came against Duke’s No. 26 Kelly Chen and Virginia Tech’s Caroline Daxhelet…Won both singles matches in the ACC Tournament, helping Tech reach the semifinals…Fell in the opening round of the NCAA singles championship to Vanderbilt’s No. 10 Fernanda Contreras…Reached the quarterfinals of the NCAA Championships in doubles with Hourigan…Tabbed as the top-seeded doubles team, the pair defeated Denver and Loyola Marymount to reach the quarterfinals against North Carolina’s No. 33 Alle Sanford and Sara Daavettila.

Fall: Ranked No. 3 doubles team in the country with Paige Hourigan and No. 103 in singles in the preseason fall rankings…Reached the doubles championship match of the ITA Southeast Regionals with teammate Hourigan… Fell in the championship match to FIU’s Ulyana Grib and Maryna Veksler…Earned a berth into the ITA National Fall Championships through regionals performance…Duo went 3-1 in California and reached the semifinals…Posted a 5-4 singles record and 11-5 doubles mark during tournament play.

Fall: Saw action in four tournaments … Went 2-1 in singles play to open the season at the Hall of Fame ITA Grass Court Invitational … Also posted a 2-1 singles record in the Bulldog Challenge and picked up a pair of doubles wins with Alexa Anton-Ohlmeyer … Competed for the Selia Mathew Singles Draw title at the Roberta Alison Fall Classic, but was forced to retire due to an injury.

Juniors: Ranked No. 14 recruit nationwide by Tennis Recruiting Network…Blue Chip recruit…Ranked No. 1 recruit in state of Tennessee and No. 3 recruit in the Southeast Region…No. 7 IMG Tennis RPI and strength of schedule…No. 26 in USTA standings and owns 31-10 overall record…Runner-up in USTA Fed Cup championship for the southern region in 2016…Won USTA’s Southern Winter Level 1 Championship in singles and doubles in 2015…Advanced to finals of USTA National Selection Tournament in doubles in 2014…Father played tennis at Jackson State (1987-88) and Rust College (1990-91)…Sister played tennis at Chattanooga…Also ran track as sophomore and junior at White Station…Competed in 200m dash and 4x200m dash…Won state championship in singles three consecutive years (2012-15)…Awarded Tennis Player of the Year in Tennessee…Received Best of Preps Award in 2014…Tabbed Tennis Player of the Year for Southern Region in Tennessee…Member of DECA and placed second at state championship…Spanish National Honor Society.