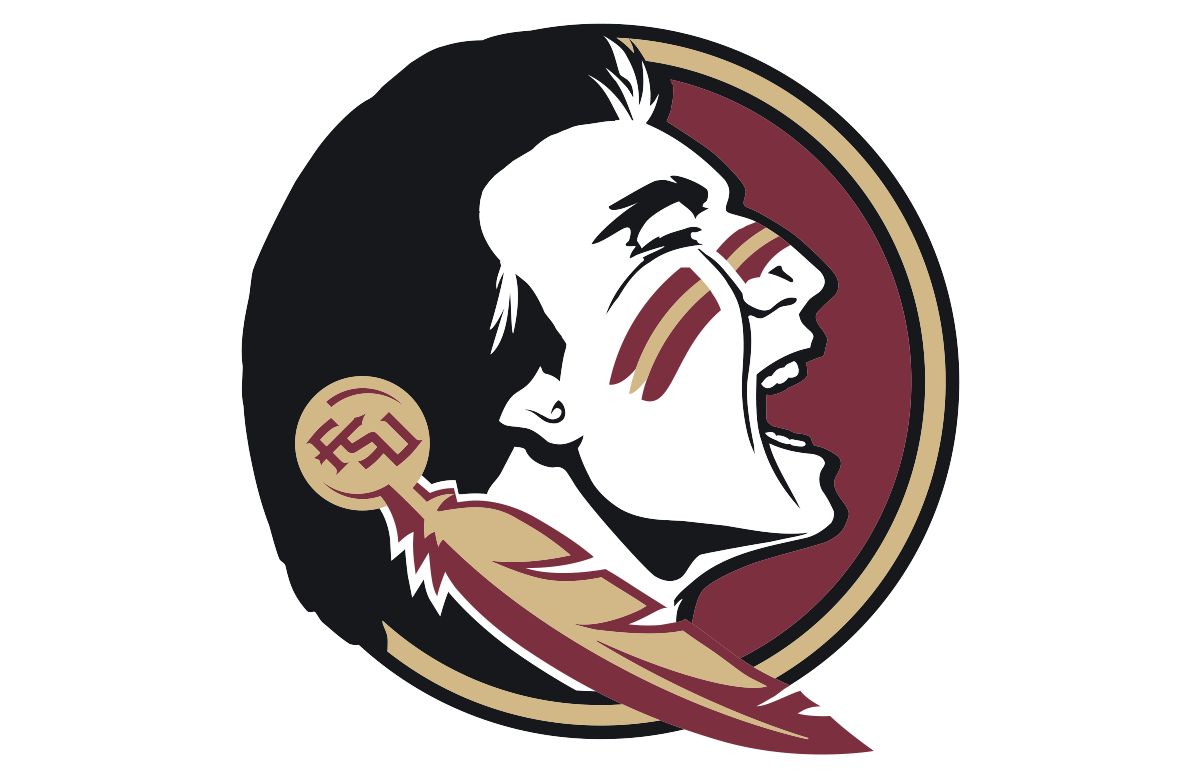 The transition away from the triple-option was no easy task for Georgia Tech in the first season under head coach Geoff Collins.

But heading into year two the Yellow Jackets could see a noticeable improvement in all facets as they team has that transition year under its belt.

With Collins’ “Above the Line” depth chart philosophy, rewarding outstanding effort with playing time, fans should expect to see new faces compete next to familiar ones.

Thanks to having the second-fewest seniors (eight) and 11th-most freshmen (55) of any FBS team in 2019, the Yellow Jackets return a lot of contributors. That experience within the system, off and on the field, will be valuable this season as the Yellow Jackets look climb up the Coastal Division ranks.

The Jackets return most of the players who started the majority of games on both sides of the ball, including their starting quarterback James Graham, leading rusher Jordan Mason, leading receiver Ahmarean Brown, leading tackler David Curry, interception leader Kaleb Oliver and sack leader Ja’Quon Griffin.

Collins said that after seeing the first workouts for the 2020 season, that it was a night and day difference between today’s team and where the team stood at the start of the 2019 season.

He noted the team was more efficient in practice, getting more practice reps and performing at a higher tempo thanks to familiarity with the drills and practice structure. He said the additional time in the weight room and conditioning the team put in during the offseason was paying off.

Having a full year in the system also helped the Yellow Jackets build for the future in another key way. In his first full year of recruiting, Collins signed the second-highest rated class in program history and the highest since 2007. 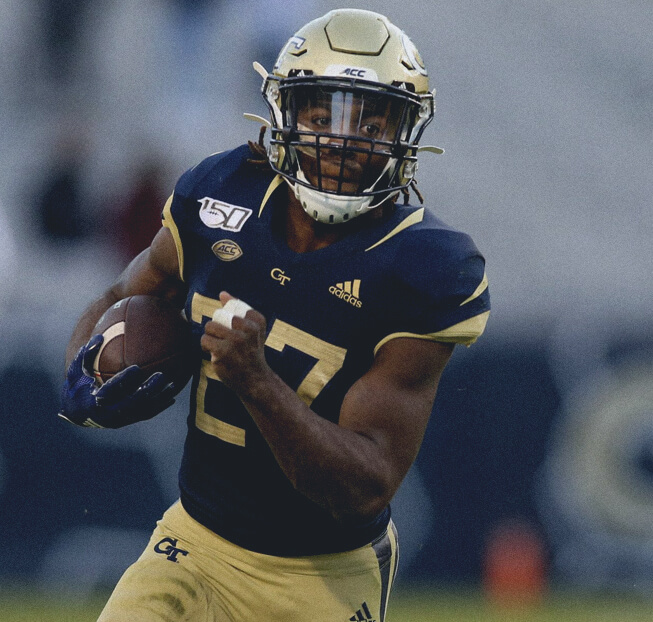 The class was ranked No. 24 in the nation by Rivals. Eleven players in the class are from Georgia, so Collins was able to keep some of the talent in-state. Seven others are from Florida. Among the players who can make an immediate impact are graduate transfer offensive lineman Ryan Johnson from Tennessee.

Running back Jahmyr Gibbs was among the top signees in the 2020 class. The four-star recruit was Georgia’s 6-A Offensive Player of the Year and an All-American after posting 2,554 yards and 40 touchdowns as a senior. Other four-star recruits include cornerback Miles Brooks and defensive end Jared Ivey. Despite a challenging schedule, the outlook is hopeful for the Yellow Jackets to make a step forward in 2020. 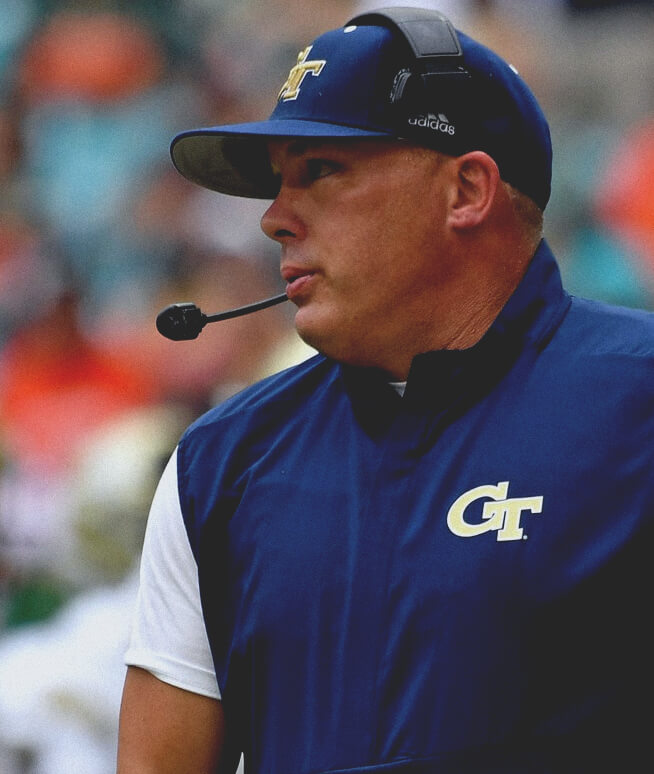 Widely regarded as one of college football’s top young coaches and recruiters, Collins was named the 20th head coach in Georgia Tech football history on Dec. 7, 2018, after recording 15 wins in two seasons as head coach at Temple. A metro-Atlanta native, Collins returns to The Flats after having previously served as a graduate assistant, tight ends coach and director of player personnel at Tech.

Prior to becoming head coach at Temple, Collins was one of the nation’s most respected defensive coordinators, serving in the role at Florida, Mississippi State, FIU and his alma mater, Western Carolina. He is the only coach to ever be nominated for the Broyles Award, given to college football’s top assistant coach, at three different schools.

An innovative recruiter and social media maven, Collins is sought as a guest lecturer and featured speaker at MBA programs and business conferences. In his renown as a coach, strategist and evaluator, he has recruited and coached more than three dozen players that have gone on to play in the National Football League.

The entire Georgia Tech coaching staff of 2019 returns for 2020, providing the continuity needed to implement a new system and philosophy to maximize the talents of a roster being built to compete week-in, week-out in the tough ACC.

*Georgia Tech does not officially recognize starters. The number of returning starters indicates the number of players who started a majority of Georgia Tech’s games in 2019.

The Ramblin’ Wreck switched from Paul Johnson’s option system to Dave Patenaude’s pro-style spread system in 2019 and, as expected, there were growing pains. But the hope is that there will be a considerable improvement with so many players back including the leading passer, rusher and receiver. Graham will likely get the first shot at being the primary starting quarterback, but faces still competition at the position. He finished the year with 1,164 yards and 12 touchdowns (tying the program freshman record). His efficiency should also improve as he matures in the system year two. Behind him on the list is redshirt freshman Jordan Yates (38 yards on 4 of 12 passing) and true freshmen Tucker Gleason and Jeff Sims. Gleason and Sims enrolled in January, the latter after flipping his commitment from Florida State. Yates and Graham have a healthy competition heading into the season, but Gleason and Sims could give them a run for their money as well.

All-ACC third team running back Jordan Mason returns for his junior campaign. Mason led the team last year with 899 yards and seven touchdowns on the ground. Also back is sophomore Jamious Griffin, who saw action in nine games as a true freshman last season. Signee Jahmyr Gibbs will also look to make an impact this season. The Yellow Jackets lost tight end Tyler Davis to the Jacksonville Jaguars in the 2020 NFL Sraft, but return sophomores Dylan Deveney (48 yards receiving on six catches) and Dylan Leonard. 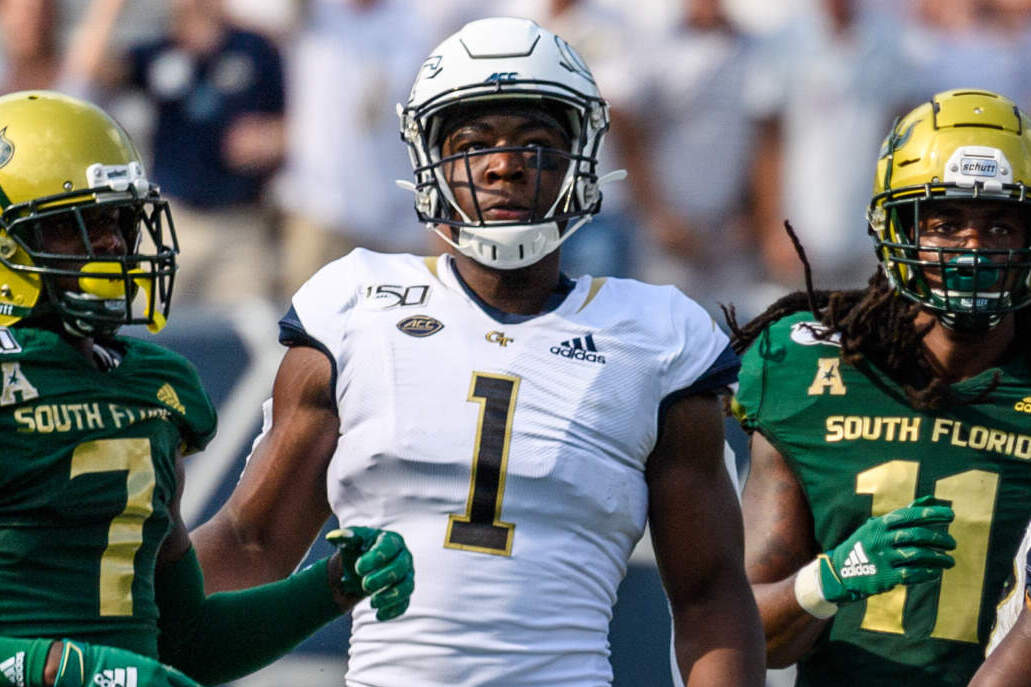 Wideout Jalen Camp returns as a fifth-year senior after missing the final eight games of last season due to injury.

Offensive guard Jack DeFoor earned honorable mention All-ACC recognition last year, and will be back along with Zach Quinney to man the trenches. Graduate transfer Ryan Johnson (Tennessee) will help along the line. Moving from the defensive side of the field is Bruce Jordan-Swilling, who is going from tackling running backs as a linebacker to being one. 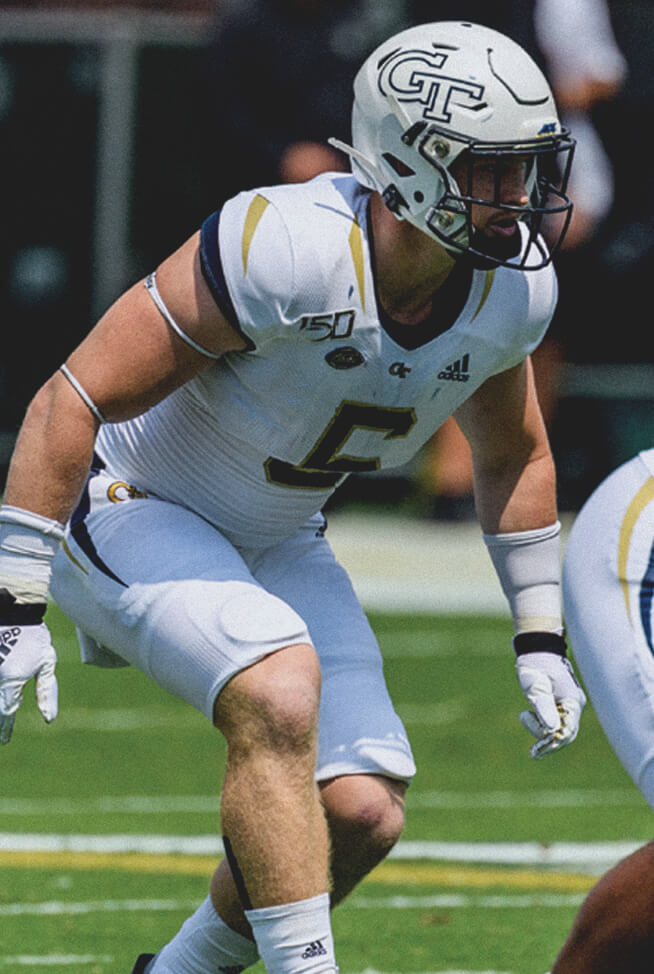 *Georgia Tech does not officially recognize starters. The number of returning starters indicates the number of players who started a majority of Georgia Tech’s games in 2019.

The 2019 adoption of Geoff Collins’ effort-based 4-2-5 system produced good results in the passing game, as they ranked 36th in passing yards allowed. In 2020 they’ll aim to keep that downfield focus while improving against the run. Tech also recorded 61 tackles for a loss last year (an average of 5.08 per game), the team’s most since 2014. The Yellow Jackets return more than 90 percent of their tackles, tackles for a loss and sacks and every one of their takeaways for 2020. Back this season are defensive ends Antwan Owens (21 tackles, one INT), Chico Bennett (17 tackles), Sylvian Yondjouen (14 tackles), Curtis Ryans (nine tackles), Justice Dingle (six tackles) and Antonneous Clayton (able to play after transferring from Florida). The defensive tackle group returning includes T.K. Chimedza (34 tackles, 1.5 sacks, one fumble recovery), Djimon Brooks (27 tackles), Ja’Quon Griffin (14 tackles, 2,5 sacks), Chris Martin (8 tackles) and  Jahaziel Lee (back from injury).

Linebacker David Curry picked up an honorable mention All-ACC nod last year. Curry led the team in tackles, with 97. He also had two sacks, an interception, three pass breakups, four passes defended, two quarterback hurries and two forced fumbles. He was one of just four players at a Power Five school, and one of 10 on FBS rosters, with at least 92 tackles and an interception and fumble recovery in 2019. He’ll be a key leader on the defense in 2020 as a senior. Along with Curry at linebacker, Quez Jackson (49 tackles) and Demetrius Knight (18 tackles, one sack) return for the Yellow Jackets.

Moving to cornerback this year is former quarterback/wide receiver Tobias Oliver; running back Jerry Howard switches to linebacker. Charlie Thomas has returned to the secondary.

Pressley Harvin III returns for his fourth season as Georgia Tech’s punter. He averaged 44.8 yards per punt last season, good for 17th nationally and fifth in school history. In his first three seasons as a Yellow Jacket, he has put together two of the top-10 single-season punting averages ever at Georgia Tech.

The only returning place-kicker left on the roster is redshirt sophomore Cliff Gandis, who does not have any game experience. Gandis was ranked as high as No. 3 nationally among place-kickers by prokicker.com when he was in high school and was the South Carolina Specialist of the Year in 2017. 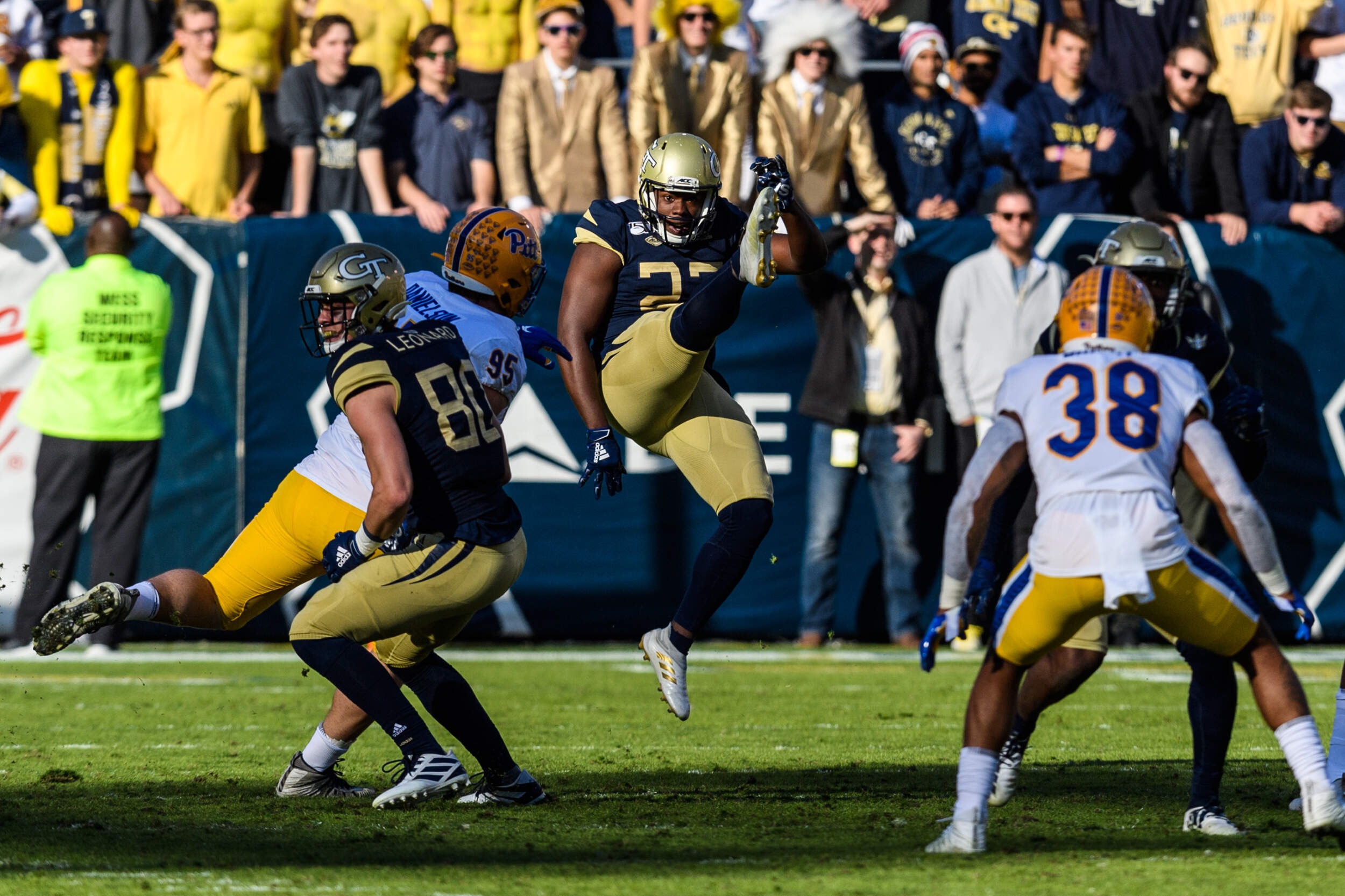