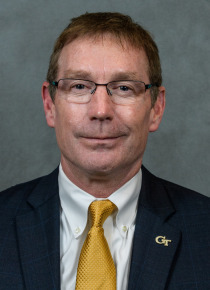 Todd Stansbury, a Georgia Tech alumnus and football letterwinner, was introduced as the Institute’s ninth director of athletics on Sept. 22, 2016.

In just three full years as the athletics director at his alma mater, Stansbury has overseen a resurgence on The Flats. Most notably, the Yellow Jackets have put together consecutive ultra-successful years athletically.

The Jackets were on pace for a similarly successful campaign in 2019-20. When the sports world came to a halt due to the global Covid-19 pandemic in March 2020, Georgia Tech men’s basketball had just finished off the program’s best Atlantic Coast Conference season in 24 years, women’s basketball was on the NCAA Tournament bubble and golf and women’s tennis were both ranked in the top 10 nationally. Additionally, Georgia Tech volleyball won the 2019 National Invitational Volleyball Championship and Tech football, under first-year head coach Geoff Collins, secured only the second top-25-ranked recruiting class in school history.

Academically, Georgia Tech was the only institution from a Power Five conference that had a multiyear NCAA Academic Progress Rate (APR) higher than the national average in every sport in 2018-19, a feat it nearly replicated in 2019-20, when 13 of its 14 programs compiled an APR above the national average in their respective sports.

In the community, Stansbury led the charge to institute Georgia Tech athletics’ Jackets Without Borders international service program, which won the ACC’s prestigious Game Changers award for community service in 2019.

Under Stansbury, Georgia Tech athletics has also reached new heights in fundraising. The Alexander-Tharpe Fund, the Georgia Tech Athletic Association’s fundraising arm set records for funds raised in consecutive fiscal years (2019 and 2020) and Athletics Initiative 2020, Tech athletics’ drive to raise $125 for facilities, endowments and operations in a three-year span from 2018-20, surpassed its goal six months ahead of its Dec. 31, 2020 deadline.

The uptick in fundraising has led to a much-needed revitalization of Georgia Tech’s athletics facilities, including:

Still to come is groundbreaking on the crown jewel of AI 2020, the $70 million renovation of the Edge/Rice Center. The new Edge/Rice Center will serve as a sleek and innovative home base for Georgia Tech athletics’ teams and administration, a one-stop shop for key student-athlete services, an anchor for recruiting efforts and a showcase for the Institute’s commitment to student-athlete success and fan engagement.

Stansbury began setting the stage for these accomplishments as soon as he officially arrived back on The Flats on Nov. 28, 2016. In the first months of his tenure as athletics director, he identified four strategic priorities for Georgia Tech athletics — to define the GT athletics brand, to establish an internal culture, to align the internal structure and to generate new revenue. He has addressed those priorities through a slew of initiatives and accomplishments. Highlights include:

• a significant revenue lift, which can be traced in large part to an innovative overhaul of sales operations that focused on integrating fundraising and ticket sales efforts;

• the establishment of a partnership with adidas to serve as the official apparel provider of Georgia Tech athletics, which was announced on Aug. 22, 2017 and went into affect on July 1, 2018;

• a re-emphasis on Georgia Tech athletics iconic Total Person Program, with investments for additional staff and programming for student-athletes, including the department’s first three Jackets Without Borders service trips to Costa Rica (2017) and Puerto Rico (2018 and 2019);

• the establishment of two new offices within the athletics department — the office of brand and ideation, which works to identify and tell the story of the Yellow Jackets’ brand, and the office of innovation, which oversees Georgia Tech’s efforts to build on its status as college athletics’ leader in innovation, particularly through collaboration and partnerships with the Institute and innovation hubs throughout Atlanta.

Several years later, he was offered and accepted a football scholarship to attend Tech. He enrolled in 1980 and played linebacker and special teams for the Yellow Jackets under head coach Bill Curry. He went on to be selected in the third round of the Canadian Football League draft by the Saskatchewan Roughriders in 1984 but after a brief CFL career, returned to Atlanta to begin a banking career.

In 1988, he left banking and returned to The Flats to become an academic advisor for Georgia Tech’s football program. In 1991, he was promoted to assistant athletics director for academics by legendary A.D. Homer Rice.

Stansbury and his wife, Karen, who were married inside the current Edge Center, reside in Atlanta. After they were married in 1995, the couple traveled the world for 18 months before returning to the United States.