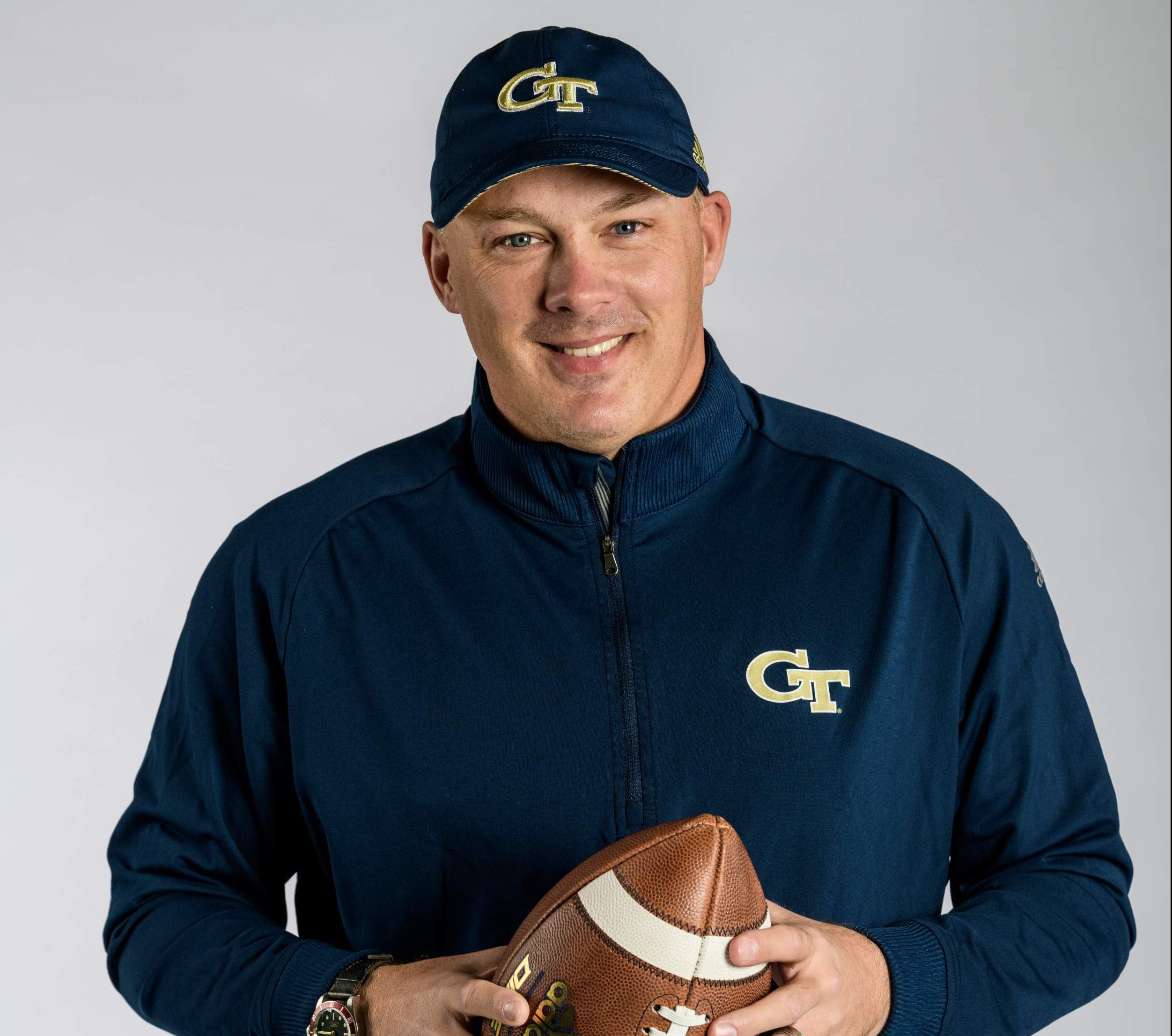 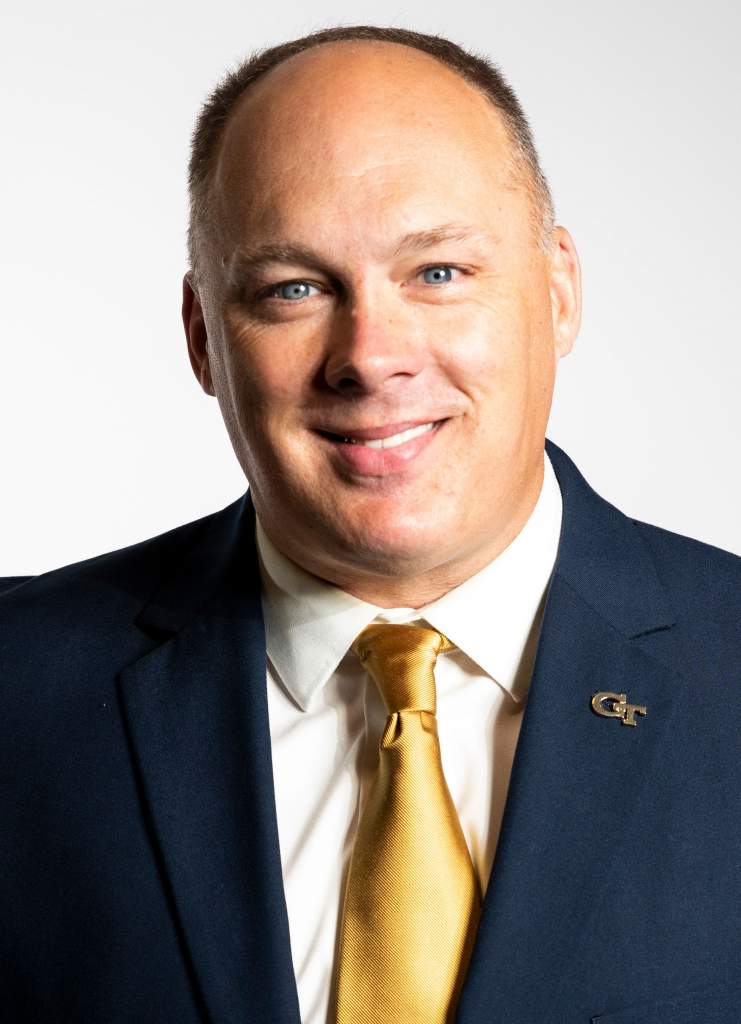 Widely regarded as one of college football’s top young coaches and recruiters, head coach Geoff Collins is in his second season at Georgia Tech. A metro-Atlanta native, Collins was named the 20th head coach in Georgia Tech football history on Dec. 7, 2018, after recording 15 wins in two seasons as head coach at Temple. He returns to The Flats after having previously served as a graduate assistant, tight ends coach and director of player personnel at Tech.

Prior to becoming head coach at Temple, Collins was one of the nation’s most respected defensive coordinators, serving in the role at Florida, Mississippi State, FIU and his alma mater, Western Carolina. He is the only coach to ever be nominated for the Broyles Award, given to college football’s top assistant coach, at three different schools.

Collins played outside linebacker and defensive back at Western Carolina. He is married to the former Jennifer Haynes and they have a daughter, Astrid (4).

Geoff Collins, an Atlanta area native and one of college football’s most successful and innovative coaches, is in his second season as Georgia Tech football’s head coach. He was named the 20th football head coach in Georgia Tech history on Dec. 7, 2018.

Born in Decatur, Ga. and raised in Conyers, Ga., Collins took the reins at Georgia Tech after serving as the head coach at Temple University in 2017 and 2018.

Despite the challenges associated with overhauling Georgia Tech’s football culture, including the monumental switch from its previous option-based offense to a pro-style, spread attack, highlights from Collins’ first year on The Flats included:

His impact has also been felt in his prowess as a recruiter. Most notably, Georgia Tech’s first full recruiting class under Collins, the incoming class of 2020, was ranked No. 24 nationally by Rivals, making it only the second top-25 recruiting class in Tech history and the first since 2007, a class that was compiled when Collins served as the Yellow Jackets’ director of player personnel.  A total of 12 four- and five-star recruits have joined the Jackets’ since Collins’ arrival as head coach in December 2018.

Prior to taking the reins at Georgia Tech, Collins put together the most successful first two seasons by a head coach in Temple’s 121-year football history. Collins compiled 15 wins and led Temple to two bowl games in his two seasons with the Owls, which are both school records for a coach in his first two campaigns at TU.

In his first season at Temple, Collins led the Owls a 28-3 win over Florida International in the 2017 Gasparilla Bowl, which was good for only the third bowl victory in school history and its first since 2011.

He coached the Owls to an 8-4 record and 7-1 mark in the American Athletic Conference in 2018, with Temple’s only conference defeat coming at No. 8-ranked and undefeated UCF. The 8-4 campaign earned Temple a berth in the Independence Bowl.

He is the only coach to ever be nominated for the Broyles Award, given to college football’s top assistant coach, at three different schools (FIU – 2010, Mississippi State – 2014 and Florida – 2015).

Collins’ 27-year career also includes a pair of prior stints at Georgia Tech. He first came to The Flats as a graduate assistant (1999-2000), then tight ends coach (2001) under head coach George O’Leary from 1999-2001, followed by a year as director of player personnel under head coach Chan Gailey in 2006.

In all, Collins has recruited and/or coached more than three dozen players that have gone on to play in the National Football League. Among Collins’ pupils in the NFL are Philadelphia Eagles All-Pro defensive tackle Fletcher Cox (a consensus All-American at Mississippi State and No. 12 overall pick in the 2012 NFL Draft), Tampa Bay Buccaneers cornerback Vernon Hargreaves (a consensus All-American at Florida and No. 11 overall pick in the 2016 NFL Draft), Atlanta Falcons safety Keanu Neal (the No. 17 overall pick in the 2016 NFL Draft) and Indianapolis Colts cornerback Rock Ya-Sin (who earned first-team all-American Athletic Conference honors at Temple after transferring from Presbyterian College and went on to be selected in the second round of the 2019 NFL Draft).

In addition to being renowned as a coach, strategist and evaluator, Collins is also widely recognized as the nation’s top head coach when it comes to branding his football program, particularly when it comes to utilizing social media in branding and recruiting efforts. His expertise in marketing and branding has led to him being a guest lecturer for Georgia Tech’s Scheller College of Business executive MBA program and a featured speaker at the 2019 Hashtag Sports conference in New York City. Under Collins, Tech became only the second college football program in the nation to partner with renowned creative agency J1S and the first program in the nation to enter into a partnership with best-selling author and branding consultant Jeremy Darlow.

Collins’ innovations in utilizing social media to aid in recruiting efforts have not only helped Georgia Tech land the two highest-rated recruiting classes in school history, but also helped Alabama sign the No. 1 class in the nation in 2007-08. Alabama’s 2008 signing class included running back Mark Ingram, who went on to become the first Heisman Trophy winner in Crimson Tide history in 2009.

As a student-athlete, Collins totaled 194 career tackles as an outside linebacker and defensive back at Western Carolina (1989-92). He had 68 tackles and six tackles for loss as a junior and helped lead WCU to a 7-4 record with 62 stops, including five behind the line of scrimmage, as a senior.

Collins, 48, is married to the former Jennifer Haynes. They have a daughter, Astrid (4).